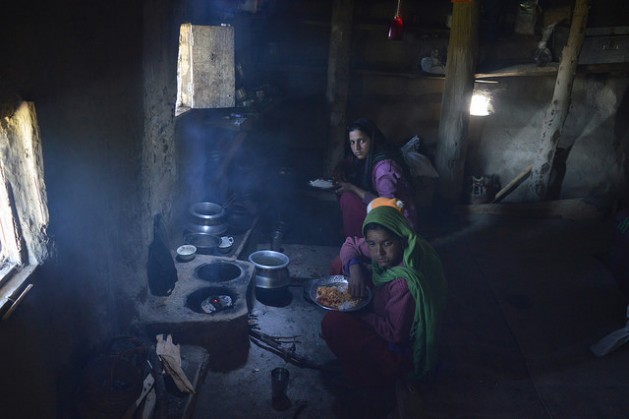 DARJEELING, India, Feb 17 2017 (IPS) - Mountain communities in the Himalayan region are almost entirely dependent on forests for firewood even though this practice has been identified as one of the most significant causes of forest decline and a major source of indoor air pollution.

Improper burning of fuels such as firewood in confined spaces releases a range of dangerous  air pollutants, whereas collection of firewood and cooking on traditional stoves consumes a lot of time, especially for women.

The WHO estimates that around 4.3 million people die globally each year from diseases attributable to indoor air pollution. Women and children are said to be at far greater risk of suffering the impacts of indoor pollution since they spend longer hours at home.

Data from the Government of India’s 2011 Census shows that 142 million rural households in the country depend entirely on fuels such as firewood and cow dung for cooking.

Despite heavy subsidies by successive federal governments in New Delhi since 1985 to make cleaner fuels like LPG available to the poor, millions of households still struggle to make the necessary payments for cleaner energy, which compels them to opt for traditional and more harmful substances.

This has prompted environmental organisations like Bangalore-based Ashoka Trust for Research in Ecology and Environment (ATREE) to help mountain communities minimise the health and environmental risks involved in using firewood for cooking in confined places. 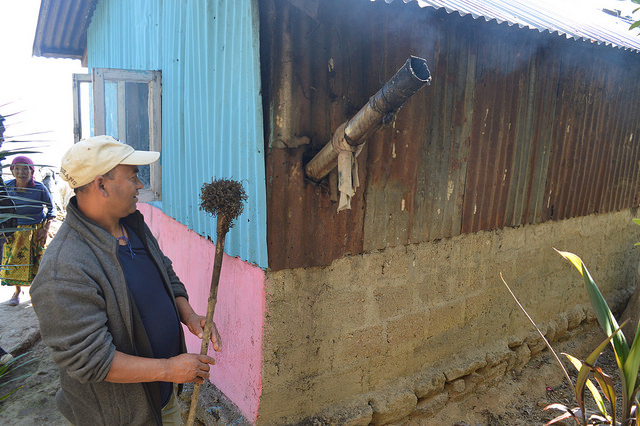 IPS: What prompted you to start the ICS programme in the Darjeeling Himalayan region?

Sarala Khaling: In many remote forest regions of Darjeeling we conducted a survey and found out that people rely on firewood because it is the only cheap source in comparison to LPG, kerosene and electricity. Our survey result found that around Singhalila National Park and Senchal Wildlife Sanctuary, the mean fuel wood consumption was found to be 23.56 kgs per household per day.

Therefore, we thought of providing technological support to these people for minimizing forest degradation and indoor pollution which is hazardous to human health and contributes to global warming as well. That is how we started replacing the traditional cooking stoves with the improved cooking stoves, which consume far less fuel wood besides reducing the pollution.

IPS: How many ICS have you installed so far?

SK: Till now ATREE has installed 668 units of ICS in different villages of Darjeeling. After the installation of ICS, we conducted another survey and the results showed reduction of fuel wood consumption by 40 to 50 per cent and also saved 10 to 15 minutes of time while cooking apart from keeping the kitchens free of smoke and air pollution.

We have trained more than 200 community members and have selected “ICS Promoters” from these so that we can set up a micro-enterprise on this. There are eight models of ICS for different target groups such as those cooking for family, cooking for livestock and commercial models that cater to hostels, hotels and schools.

IPS: When did the project begin?

SK: We have been working on efficient energy since 2012. This technology was adopted from the adjacent area of Nepal, from the Ilam district. All the models we have adopted are from the Nepalese organization Namsaling Community Development Centre, Ilam. This is because of the cultural as well as climatic similarities of the region. Kitchen and adoption of the type of “chulah” or stove has a lot to do with culture. And unless the models are made appropriate to the local culture, communities will not accept such technologies.

IPS: Who are the beneficiaries?

SK: Beneficiaries are local communities from 30 villages we work in as these people are entirely dependent on the fuel wood and live in the forest fringes.

SK: Women spend the most time in the kitchen, which means young children who are dependent on the mothers also spend a large part of their time in the kitchen. The smokeless environment in the kitchen definitely must be having a positive effect on health, especially respiratory conditions. Also the kitchen is cleaner and so are the utensils. And then using less fuel wood means women spend lesser time collecting them thus saving themselves the drudgery.

IPS: What is the feedback from the beneficiaries?

SK: The feedback has been positive from people who have adopted this technology. They say that ICS takes less fuel wood and it gives them a lot of comfort to cook in a smoke free environment. Women told us that their kitchens are looking cleaner as so also the utensils.

IPS: How much it costs to have a clean stove? And can a household get it on its own?

SK:  It costs around INR 2500 (37 dollars) to make a stove. ATREE supports only the labour charges for making a unit. Of course we support all the training, mobilising, monitoring and outreach and extension. Yes, there are many houses outside of our project sites who have also adopted this technology. The material used for making the clean stove is made locally like bricks, cow dung, salt, molasses and some pieces of iron.

IPS: Since you say that you are training local people to make these stoves, do you have any target how many households you want to cover in a certain time-period?

SK:  We are looking to provide 1200 units to as many households. But, depending on the uptake, we will scale up. Our main objective is to make this sustainable and not something that is handed out as free. Our model is to select community members and train them.

We want these trained community members become resource persons and organise themselves into a micro-enterprise of ICS promoters. We want these people to sell their skills to more and more villages because we believe people will pay to make and adopt this technology. We are noticing that this has already started happening.

IPS: Have you provided this technology to any hostels, hotels etc?

SK: Yes, government schools who have the midday meal systems have also adopted this. There are about half a dozen schools which are using ICS and we are mobilizing more to adopt this technology.