PALLUPITIYA, Sri Lanka, Apr 17 2012 (IPS) - Reacting to a series of deadly crocodile attacks, the Sri Lankan government has drawn up plans to capture the free-ranging beasts and confine them to parks. Conservationists oppose this move. 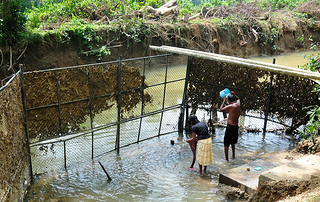 Villagers bathe behind wire mesh to ward off crocodiles in the Nilwala river. Credit: Amantha Perera/IPS

On Apr. 12, Sri Lanka’s wildlife department ordered an operation to capture crocodiles lurking in the rivers and estuaries of this island country and relocate them in conservation parks for the safety of citizens – and that of the protected animal.

What triggered the wildlife department’s move was an attack on an 18-year-old woman in the Nilwala river, just outside this village, on Apr. 4. Nuwanthika Sathsaran’s remains were recovered by villagers.

Wildlife officials later captured a four metre-long crocodile that was believed to have attacked Nuwanthika and also dragged away a mother of three who was washing clothes in the river, a week earlier.

Whether the wildlife department will persist with the capture programme is uncertain and it is currently in consultation with experts and conservationists. Meanwhile the department has also undertaken a crocodile census, the first in the country.

Encounters with crocodiles – living fossils that once breathed the same air as the dinosaurs – can and should be avoided, says Anslem de Silva, vice-chairman of the crocodile specialist group at the International Union for Conservation of Nature in South Asia and Iran.

“I have told the government that setting up conservation parks is not feasible. With this new plan, whenever people see a crocodile, they will ask authorities to come and catch it, even if it is a harmless one.

“We should be paying attention to educating people and stopping them from encroaching on crocodile habitats,” de Silva told IPS.

Herpetologists estimate that over the past 15 years more than 130 people have been attacked by crocodiles, resulting in 35 fatalities. At least 50 crocodiles have also been killed in encounters with human beings in the same period.

De Silva says the wildlife department’s plans to set up crocodile conservation centres – in Kirala Kele in the Southern Province and in the Muthurajawela wetlands in the Western Province – are unsound.

Muthurajawela, a heavily populated area north of Colombo, has vast stretches of scrub and marshlands which are crocodiles habitats. Rathmalana, a marshy area south of the capital city, is also steadily being encroached upon.

While the government remains undecided on how to deal with crocodiles and encroachments, people have begun retaliating against known man-eaters in their neighbourhoods – though this is illegal because crocodiles are protected animals.

On Feb. 12, the residents of Ragama town, north of Colombo, used a large hook baited with a chicken to capture and kill a five-metre specimen, weighing more than 1,000 kg, believed to have been responsible for the disappearance of Sebastian Angelo Uday Kumara, 36, who went missing on Jan. 26.

“What is happening is that human beings are increasingly encroaching on crocodile habitats. There have been crocodile attacks reported from the Nilwala river for hundreds of years – but this is a crocodile habitat,” Namal Kamalgoda conservationist and former president of the Sri Lanka Natural History Society, told IPS.

Citizens compelled to share streams and waterways with crocodiles see the situation differently. “Look, I have been living here all my life and these creatures were never here until about 5-6 years ago,” says Kuruppuarchachi Dharmapala, a middle-aged resident of Pallupitiya village.

Dharmapala told IPS that the animals have seriously disrupted life in the village where it is customary for people to bathe and wash clothes in the river. “We are now forced to bathe in wire mesh cages,” he said.

Survivors of crocodile attacks are certainly not impressed by the fact that the crocodile is a living fossil or by its status on the food chain, but see it as a serious menace.

Six months ago, Sunil Shanta was taking a dip in a stream that runs behind his house in Pallulpitiya when he felt a stabbing pain in his buttocks. “I turned around to see a long snout and a pair of shining eyes,” he told IPS.

The predator tried to drag Shanta into the water, but he managed to grab an overhanging tree branch and scream for help. His neighbours were able to beat back the beast, leaving a severely injured Shanta to spend the next two months in a hospital.

Other crocodile attack victims who have saved themselves by screaming for help include M. Seneviratne, a politician belonging to the left-wing Peoples’ Liberation Front, who was set upon by a reptile while fishing in Anuradhapura, a famed pilgrimage and tourist centre, in 2010.

Attacks are not confined to the rural areas, and sightings are now being frequently reported in the urban areas of Sri Lanka, a sign that the crocodile population is growing.

De Silva said increasing salinity in the island country’s estuaries and rivers, attributable to climate change and rise in sea levels can affect crocodile populations. “There is evidence to suggest that the crocodile population increases when salinity and acidity levels rise.”

As Sri Lanka urbanises conflict is inevitable, says Kamalgoda. “We are forcing crocodiles to eat us as there is nothing else left for them to eat.”

Kamalgoda said the situation of the crocodile is no different from that of other Sri Lankan wildlife such as elephants and leopards that are being crowded out by human settlements. “This is the inevitable path of development and animals will always be the losers,” he said.