SRINAGAR, India, Apr 1 2012 (IPS) - Naseema Akhtar, 38, worries that her daily treks to collect clean water from the mountain springs around her village of Bonpora, in Kashmir’s Kupwara district, are getting longer. She is already doing more than seven km every day. 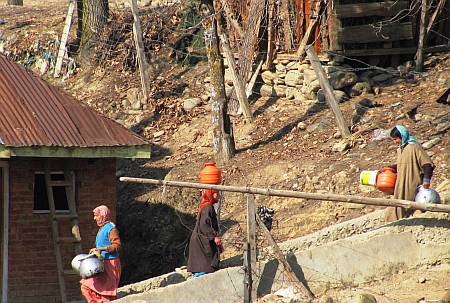 “The higher up you go, the cleaner the water is likely to be, but there is a limit to how far one can climb to fetch a pitcher of water,” she told IPS. “On days when I’m in a hurry I make do with water downstream, though I know it is badly contaminated.”

Akhtar, and other women from Bonpora, 110 km north of Srinagar, carry pieces of cloth with them to strain the water – though this is poor defence against dangerous water-borne pathogens.

“We know that the cloth only removes insoluble solids, but what can we do? There is no other source of safe water for our daily needs,” said Akhtar. People in most of Kashmir’s hamlets rely on water from mountain springs or, if unable to walk distances, resort to the risky streams and ponds nearby.

Kashmir, a distinct region in the Indian state of Jammu and Kashmir, has seen armed separatist militancy since 1989, complicated by territorial claims over the region by neighbouring Pakistan.

“When the mountain springs get scanty or dry up, we are forced to use the stagnant water in small ponds around our village,” says Shahzad Mir, a resident of Badibera village, also in Kupwara district.

Badibera, since December, has the benefit of water pumped out of a bore well installed by the state government, but the water is hard with dissolved minerals, including fluorides. The residents complain that the supply is erratic and may fail for days together.

“In the summers, people here regularly fall sick and children seem particularly prone to diarrhoea and other ailments,” said Mir. “Doctors tell us that this happens because of drinking dirty water.”

Zareefa Begam, a 43-year-old woman in Mir’s village, has learnt it the hard way. “Last year, all my three kids suffered severe diarrhoea and I had to stay away from work for more than a week to look after them.”

Other villagers said they were spending more out-of-pocket than ever before for treating stomach ailments, especially young children.

Poor rural families, says Kousar, suffer on many counts. “They end up spending money on transportation and medicines, apart from having to take out time from earning livelihoods. And the women, as caregivers, take the brunt of it.”

Under-five mortality rate in Jammu and Kashmir state is 43 per 1,000 – nowhere near achieving the United Nations Millennium Development Goal of reducing the rate to 31 per 1,000 by 2015.

Tufail Mattoo, director of rural sanitation in Kashmir, identifies the major cause of diarrhoea and other water-borne diseases to open defecation in the rural areas. “The rains leach the faecal matter into the water bodies, making them unsafe.

“We are trying very hard to discourage open defecation, but it is going to take time to convince the people,” Mattoo told IPS.

Srinagar’s State Medical Hospital treats thousands of patients for diseases like typhoid, cholera and hepatitis in the summer months. “About 90 percent of the patients come from villages where contaminated water is emerging as a huge health risk,” Rafreeq Ahmed, a doctor at the hospital, told IPS.

A government survey released in March said that more than 65 percent of Kashmir’s seven million people drink untreated water and that the bulk of the population depends on water from ponds, streams and wells.

The survey, taken together with a study released in February by the Integrated Disease Surveillance Unit (IDSU), showing high coliform bacteria count in Kashmir’s water bodies, gives clues to why diarrhoeal diseases are on the rise in the region. Coliform bacteria found in water, soil and on vegetation warn of the presence of dangerous faecal pathogens, including bacteria, viruses, protozoa and larger parasites.

Said Dr. Sajjad Ahmed who was part of the team of doctors who carried out the IDSU study: “There is a dangerous trend in which raw, untreated sewage is channelised into water bodies without any treatment, and that is why the water sources are showing such high levels of contamination.”

“In all the rural areas of Kashmir, toilets are build close to water bodies,” says senior gastroenterologist at the Sher-e-Kashmir Institute of Medical Sciences, Ghulam Mohammad Malik.

Malik also laid blame on security forces – deployed in Kashmir to fight separatist militancy and stop infiltration from Pakistan – who often bypass sanitation rules. Some 500,000 troops are presently stationed in Kashmir, most of them deployed in the strategic upper reaches, adding to the contamination of the natural springs.

“Security personnel form a good percentage of the population of Kashmir and obviously their behaviour is a major influence,” says Rishab Khanna, president of Indian Youth Climate Network (IYCN). “We are seeking to engage them as part of our awareness campaigns.”

Kashmir’s status as a major tourist and pilgrimage destination contributes to the waste disposal problem. According to official information, there are 4,300 hotels in 22 tourist resorts and towns across Kashmir functioning without proper sewage disposal facilities.

IYCN, which has been organising environmental safety campaigns in Kashmir for the last two years, advocates green solutions such as converting the human waste into organic fertilizer.

“Right now Kashmir imports vast quantities of synthetic fertilizer from outside the state,” Khanna said. “Converting the waste into fertilizer will make for safe disposal as well as savings on farming inputs,” he said.