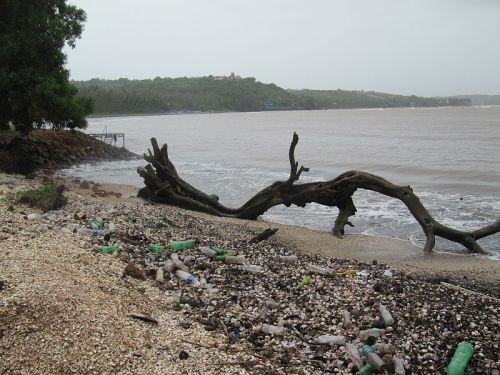 Plastic debris washed up on Coco Beach in Goa, India, where the Mandovi River empties into the Indian Ocean. Credit: Hajjo ms/CC BY 3.0

UXBRIDGE, Canada, May 10 2012 (IPS) - Plastic trash is altering the very ecology of the world’s oceans. Insects called “sea skaters”, a relative of pond water striders, are now laying their eggs on the abundant fingernail-sized pieces of plastic floating in the middle of the North Pacific Ocean instead of relying on a passing seabird feather or bit of driftwood.

With an average of 10 bits of plastic per cubic metre of seawater, there are now plenty of places for sea skaters to lay eggs in a remote region known as the North Pacific Subtropical Gyre, 1,500 kilometres west of North America. Not surprisingly, egg densities have soared, a new study has found.

“We’re seeing changes in this marine insect that can be directly attributed to the plastic,” says Miriam Goldstein, study co-author and graduate student at the Scripps Institution of Oceanography at UC San Diego.

This is the first proof that plastics in the open ocean are affecting marine invertebrates (animals without a backbone), which will have consequences for the entire marine food web.

“We simply don’t have the data to know what those consequences will be. It is a very remote region of the ocean, hard to get to and expensive to conduct research,” Goldstein told IPS.

The North Pacific Gyre is one of five large systems of rotating currents in the world’s oceans. It has become better known in recent years as the “Great Pacific Garbage Patch”. It has at least 100 times more plastic today than it did in 1972, according to the study published this week in the journal Biology Letters.

“There were no hard surfaces before in the North Pacific Gyre other than the occasional feather and piece of wood,” says Miriam Goldstein, study co-author and a graduate student at the Scripps Institution of Oceanography at UC San Diego.

“The ocean looks pretty normal out there in the gyre. There is no floating island of trash as some people imagine,” Goldstein told IPS.

It would be far better if there was a plastic island in the gyre. It would be possible to clean it up and likely have less of an impact on marine life, she said. Nearly all plastics break down into smaller and smaller pieces and everything from turtles to seabirds and fish mistake bits of plastic as food.

Researchers at Scripps have also reported that nine percent of the fish collected during their expedition to the Gyre had plastic waste in their stomachs. They estimated that fish in the intermediate ocean depths of the North Pacific Ocean ingest plastic at a rate of roughly 12,000 to 24,000 tonnes per year.

At least 95 percent of Northern fulmars, a common seabird in the North Sea numbering in the millions, have one to several dozen bits of plastic in their stomachs, Andries van Franeker, a seabird expert, told IPS previously. Van Franeker is a biologist with the Institute for Marine Resources and Ecosystem Studies at the University of Wageningen in Holland.

A related species, the tiny Wilson’s storm petrels, unknowingly transport an estimated 35 tonnes of plastic in their stomachs during their annual migrations between the North Atlantic and the Antarctic, he said.

No one knows how much plastic is in the oceans. Another expedition in the Pacific recently concluded that waters between five and 30 meters deep contained at least 250 percent more and as much as 27 times more plastic than the top three or four metres.

“Almost every tow we did contained plastic regardless of the depth,” said expedition leader Giora Proskurowski, a researcher at the University of Washington.

Until now, decades of research into how much plastic litters the ocean was done using fine nets to skim the surface and underestimated the true amount of plastic debris in the oceans, Proskurowski said in a release.

Proskurowski and colleagues found that winds push the confetti-size pieces of plastic debris deep into the water, and they then float back up when winds calm. Based on these findings and multiple measurements at various depths, they determined there is far more plastic in world’s oceans than anyone realised.

In 1950, just five million tonnes of plastic was manufactured globally – about two kgs for every person. Today, each person in developed countries uses about 100 kgs of plastic annually and less developed use 20 kgs, although that number is growing rapidly.

The UNEP-Global Programme of Action (GPA) estimates that about 80 percent of the plastics and other human-made debris originates from land sources not from shipping.

California nearly became the first U.S. state to ban plastic bags but a multi-million-dollar lobby effort by the plastics industry killed the proposed legislation as it came to a final vote, said Kirsten James, water quality director of Heal the Bay, a California environmental group.

“Less than five per cent of the 19 billion plastic bags used in California every year are recycled,” James previously told IPS.