WELIGAMA, Sri Lanka, Mar 10 2012 (IPS) - The gentle waves of Weligama bay that lap at the small, tight-knit fishing village of Kaparratota, 140 km south of Colombo, can be deceptive. 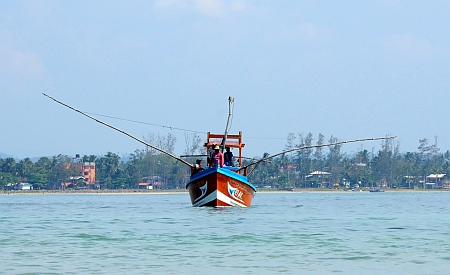 On Nov. 25 last year, tragedy struck Kaparratota when gale-force winds moving north churned up the seas leaving 14 fishers from this village dead – the bodies of 11 of them were never recovered.

A total of 29 people had died along Sri Lanka’s southern coast, and over 10,000 buildings damaged, though Weligama was the worst affected area. Many who faced the storm were left stunned by its ferocity as well as the suddenness with which it whipped up and died down.

“We never knew a storm was coming, no one told us…suddenly the sea just rose,” Lamahevage Chandana, a fisher told IPS. He survived by floating on the waves for seven hours, his small boat smashed.

Experts say the tragedy could have been avoided if ordinary folk like Chandana, as well as authorities, had paid better attention to changing weather patterns around this island country.

Of late, extreme weather events have increased in frequency, Mudalihamige Rathnayake, who heads the geography department at the Ruhuna University in southern Sri Lanka, told IPS.

“Gale-force winds hitting towns and villages are being reported as cyclones, or mini-cyclones, which they are not,” he said. “They are the creation of cooler air rushing in to fill the vacuum created by an extreme temperature rise in a small area.”

Gale-force winds are defined as those reaching a speed of up to 117 km per hour on the Beaufort scale and though not as strong as hurricanes, they create exceptionally high sea waves and are capable of uprooting trees.

Statistics show that there are now fewer rainy days, with the monsoon now dumping its water in a shorter time span. This was what happened between January and February 2011, when a year’s worth of rain fell on parts of the Eastern Province in one month, flooding hundreds of villages.

Nimal Dissanayake, who heads the Rice Research Institute of Sri Lanka, told IPS that the changing rain patterns have forced experts to develop quick maturing rice varieties. “We have developed them, but need a better understanding of the rain patterns to recommend them,” he told IPS.

Rathnayake recently carried out a survey of awareness levels among ordinary people in southern Sri Lanka of changing weather patterns and was disappointed with the results.

“There is hardly any knowledge of climate change or changing weather. No one is really interested in knowing how to cope with natural disasters,” he said.

Rathnayake found the lack of knowledge and the disinterest surprising given that the southern coast of Sri Lanka was pulverised by the 2004 Asian tsunami. Signboards that dot the coast do indicate higher, safer ground to run to in the event of a tsunami.

“Everybody knows that they have to run if a tsunami is coming, but they don’t know how to deal with a cyclone, or fast moving winds that come in short bursts. No one even thinks that a prolonged drought may have been caused by changing climate,” he said.

Only around 20 percent of Sri Lanka’s 1,520 km coast is prone to erosion, but the bulk of it is in the densely populated southern and western coasts that take the brunt of the monsoons.

Much of the erosion-prone coast is protected by a sea wall of boulders, a solution that the Coast Conservation Department (CCD) has now found to be counter-productive.

Anil Premarathne, CCD director-general, told IPS that the barriers built of boulders limit economic activity and transfer the erosion from one part of the shore to another.

The CCD is now encouraging ‘softer solutions’ like wider beaches, sand filling, mangroves and strict zoning regulations. But with the coast thickly populated, Premarathne says it is difficult to even discuss these options.

“In Sri Lanka we need strict zoning measures,” Premarathne said. “But unless there are beaches where there are no houses or businesses nearby – which is hardly the case in the south and the west – it is not easy to implement.

“Because erosion takes place over many years, even decades, there is not much concern. People don’t seem to notice it happening nor are they worried,” he said. Already some coastal urban areas are at risk from rising sea levels.

Coastal districts like Gampaha, that lies just north of Colombo, meet at least 40 percent of water requirements by pumping out groundwater, increasing the risk of saline ingress.

“Salinity will rise in coastal areas if sea levels rise,” said Premarathne. “We have also seen that wave heights are tending to get higher during the monsoons,” he added.

Since stopping climate change is unrealistic, the NCCAS focuses on preparing and understanding what needs to be done by way of preparation, economically and environmentally.

Yet, most ordinary people do not take climate change seriously. Chandana, even after his near death experience, says nonchalantly: “These incidents happen…we just have to live with them.”

Such indifference, says Rathnayake, is cause for concern. “These things are beyond our control, but we can be better prepared to face them and save lives.”