SRINAGAR, India, Mar 23 2012 (IPS) - As separatist militancy peters out in Kashmir, the valley is beset by armies of tourists who bring in the dollars but devastate the fragile ecology of ‘Asia’s Switzerland’. 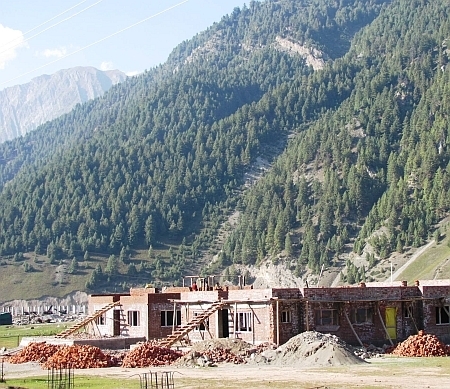 Alarmed at the rapid destruction, the state’s environment and remote sensing department has called, in a report, for immediate remedial measures against unplanned construction at the resort of Sonamarg, 87 km north-east of this city, summer capital of Jammu and Kashmir state.

“While development of modern infrastructure is of paramount importance for meeting the needs of tourism industry, it is important to design such development in an eco-friendly fashion to preserve and conserve the fragile ecology and environment of Sonamarg,” says the yet unpublished report.

“The development which has already taken place at Sonamarg, or is in progress, has serious, adverse impacts on the ecology and environment,” the report, made available exclusively to IPS, warns.

According to the report, the waste generated by hundreds of thousands of tourists is disposed of untreated and no thought given to scientific management while effluents are finding their way into the Sindh River, which flows through the resort.

“This causes extensive pollution of the river because no sewerage treatment plant (STP) is in place and the same needs to be planned at the earliest,” the report says.

“Municipal Solid Waste (MSW) is not managed scientifically as prescribed under the municipal solid waste management rules under the Environment Protection Act 1986. For this purpose a modern landfill site needs to be developed as is mandatory under the Act, to manage MSW.”

Environment activists in Kashmir, which forms part of the Indian state of Jammu and Kashmir, say that Sonamarg has so far been spared the havoc visible in other famed tourist spots in the state such as Gulmarg and Pahalgam.

“Unfortunately, this pristine valley is going the same way as the other major tourist spots and the same kind of degradation is now to be seen in Sonamarg,” Musavir Ahmed, an environment activist with Serene Kashmir, a non-governmental organisation (NGO), told IPS.

“Pahalgam and Gulmarg have been turned into concrete jungles through unplanned construction that ignored such basics as treatment for liquid and solid waste,” Ahmed said.

Kashmir’s tourist spots attracted visitors through the last two decades of violent insurgency, but the footfalls are increasing as peace descends on the valley.

About half-a-million people are directly or indirectly associated with the tourism industry in the Kashmir region, which accounts for seven million of Jammu and Kashmir’s 12.5 million strong population.

Such is the rapidity of the degradation that environmental groups fear that the very features that attract tourists to Kashmir will now work towards their destruction.

The Pahalgam Peoples Welfare (PPW), an NGO, has filed a public interest litigation (PIL) in the Jammu & Kashmir High Court asking for intervention in stopping illegal constructions in Pahalgam and the court has already served notices to the government and its arm, the Pahalgam Development Authority.

“Through the PIL, we have conveyed to the court that building bylaws are being violated,” said Reyaz Ahmed, member secretary of PPW.

“Powerful officials and influential businessmen have converted the green zones in the master plan into areas for construction after purchasing chunks of land in Pahalgam,” Ahmed said.

Environmental activists are encouraged by the fact that the court has taken oversight of the government’s plans to cleanse Srinagar’s famed Dal lake, which has turned into a vast cesspool as result of raw sewage being discharged into it.

Sabah ul Solim, senior scientist at Kashmir’s Lakes and Waterways Development Authority, says the Dal has now become a repository of nutrients, which is upsetting its ecological balance.

“The Dal lake has become so rich in nutrients that farmers use the silt for organic manure in their orchards during the de-silting operations,” Solim told IPS. The nutrients foster the growth of stubborn underwater weeds that are choking out other plant species and reducing the depth of the lake.

“We have around 6,000 people living around the lake while there are 600 houseboats that accommodate tourists,” said Solim. “All the raw sewage from homes, hotels and houseboats is discharged into the lake with unfortunate results.”

“We tried installing mini-STPs in the houseboats, but they proved impractical to operate and maintain,” Solim said.

According to Shahid Ahmad, who teaches environmental science at the Sri Pratap College in Srinagar, the lake has also shrunk in size. “Massive encroachments and the erection of many structures and hotels along the banks have led to a serious reduction in the total area of the lake.”

According to official estimates the Dal lake has lost 10 sq km to encroachments since 1953 when the it measured 25 sq km.

The Dal lake’s case is not an isolated one in Kashmir. Ahmad says that the Wullar, Mansbal, and Anchar lakes are likewise under threat. “Wullar, among the largest freshwater lakes in Asia, has shrunk from 190 sq km to about 72 sq km.”

Gulmarg, 50 km north of Srinagar, has no waste treatment facility although thousands of tourists throng the ski resort every summer, leaving behind large amounts of waste.

Atal Dillu, tourism commissioner, acknowledges the many loopholes in Kashmir’s tourism policy. “Yes there are lacunae. We are working on installation of STPs and incinerators at the major tourist sites.”