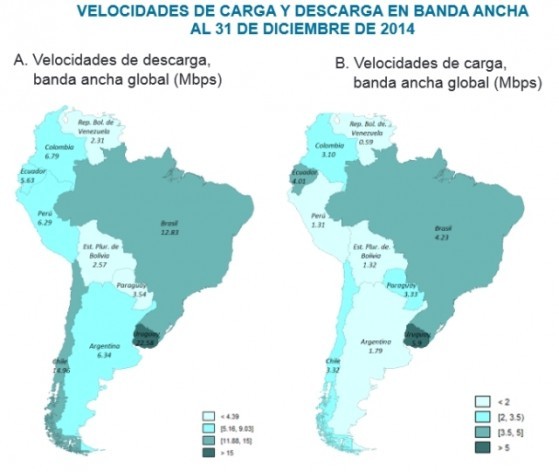 Map of broadband speed in Latin America in late 2014, according to a report by the Economic Commission for Latin America and the Caribbean. Credit: ECLAC

MEXICO CITY, Aug 28 2015 (IPS) - The Sustainable Development Goals (SDGs) will include targets for information and communication technologies, such as strengthening the Internet. And Latin America will be behind from the start in aspects that are key to increasing its educational and medical uses, bolster security and expand bandwidth.

That lag is especially visible in the construction of Internet exchange points (IXPs) and the upgrade of the Internet protocol from IP version 4 (IPv4) to IP version 6 (IPv6).

In the first case, the construction of neutral IXPs allows faster handling of greater data flows, because they circulate in the national territory without the need for access outside the country. This reduces costs and improves the quality of service.

But Lacier Dias, a professor with the Brazilian consultancy VLSM, said the advances made in his country have fallen short.

“Investment and infrastructure are lacking,” he told IPS. “It’s a challenge to expand it to the entire country, because of the size of the territory and the distance. Another challenge is offering broadband to all users.”

In the region, Brazil has the highest number of IXPs: 31, according to the 2014 study “Expansion of regional infrastructure for the interconnection of Internet traffic in Latin America”, drawn up by the Corporación Andina de Fomento (CAF), a regional development bank.

The progress made in Brazil is due to a public policy that foments this infrastructure, combined with an effective multisectoral agency, the Brazilian Internet Steering Committee (CGI), which administers the country’s network with the participation of the government, companies, academia and civil society.

In 2004, the CGI launched the “traffic exchange points” initiative to open more IXPs to connect universities and telecommunications and internet service providers.

The 31 IXPs cover at least 16 of Brazil’s 26 states, with a peak period aggregate traffic of 250 GB. An additional 16 potential IXP points have been identified, while at least 47 are under evaluation. 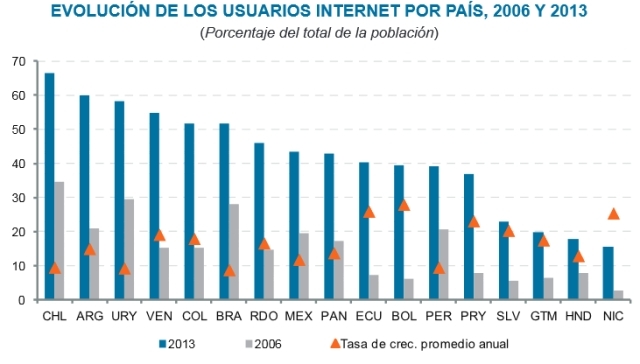 Growth of Internet users in Latin America, country by country, between 2006 and 2013. Credit: ECLAC

In Argentina, the first IXP was opened in 1998 and 11 now operate in five provinces. They connect more than 80 network operators through a hub in Buenos Aires. Total traffic is over eight GB per second.

The hub is managed by the Argentine Chamber of Databases and Online Services, which represents Internet, telephony and online content providers.

Mexico opened its only IXP in 2014, administered by the Consortium for Internet Traffic Exchange, made up of the University Corporation for Internet Development and Internet service providers.

The users of these sites include Internet providers, educational systems and state governments.

The 17 SDGs will be adopted at a Sep. 25-27 summit of heads of state and government at United Nations headquarters in New York, with 169 specific targets to be reached by 2030.

And target 9c is “Significantly increase access to information and communications technology and strive to provide universal and affordable access to the Internet in least developed countries by 2020.”

In Latin America, unlike in Europe, regional IXPs do not yet operate to aggregate traffic between countries.

Chile, Argentina and Uruguay, in that order, are the countries with the highest proportion of Internet users, while Guatemala, Honduras and Nicaragua have the lowest, in a region marked by an enormous gap in access between rural and urban areas.

With respect to broadband, or high-speed Internet access according to U.S. Federal Communications Commission standards, the ECLAC study indicates that Uruguay, Argentina, Chile and Mexico report the largest number of connections over 10 MB per second, while Peru, Costa Rica, Venezuela and Bolivia have the smallest number. 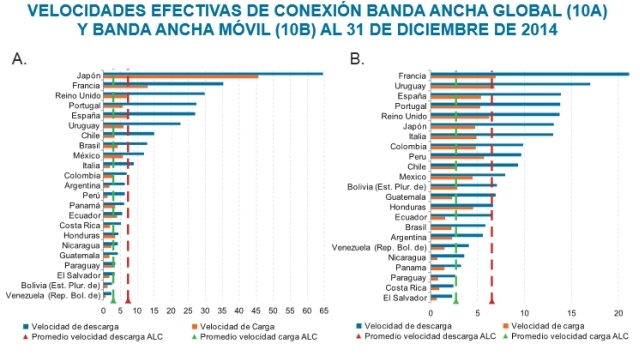 Broadband speed in fixed and mobile connections in several countries of Latin America, compared to selected In the industrialised North. Credit: ECLAC

Meanwhile, the highest level of consumption of mobile broadband devices is found in Costa Rica, Brazil, Uruguay and Venezuela, and the lowest in Paraguay, Guatemala, Peru and Nicaragua.

“The region must become more interconnected, and in order for that to happen, regional traffic and IXPs must be fomented,” David Ocampos, Paraguay’s national secretary of Information and Communication Technologies, told IPS. “There is a lot to be done in terms of traffic exchange. There are no hubs. Infrastructure has to be built, with regional rings.”

Only 30 percent of the content consumed in Latin America is produced in one of the countries in the region, which can be attributed to the availability of broadband and to infrastructure like IXPs and IPv6, according to the study “The ecosystem and digital economy in Latin America” by the Telecommunications Studies Center of Latin America (CET.LA).

Of the 100 most popular sites in Latin America, only 26 were created in the region, although consumption of cyber traffic per user rose 62 percent in the last few years, higher than the global increase.

In the countries of Latin America, 150 billion dollars have been invested in telecoms in the past seven years, but another 400 billion are needed over the next seven years to close the digital gap.

CAF proposes the construction of three inter-regional IXPs, in Brazil, Panama and Peru, as well as three kinds of national connections in the rest of the region, to be included in the inter-regional ones.

With respect to IPv6, which was launched globally in 2012, Latin America and the Caribbean are slowly moving towards that standard.

In June 2014 the region officially ran out of the IPv4 address space it had been assigned.

“With IPv6 all Internet users can be covered, with third generation mobile networks. As of this year, Brazil is only buying technological equipment that supports IPv6,” said Dias of Brazil.

“Everyone is looking to IPv6; it’s the natural Internet upgrade. With more IXPs comes the step to IPv6. Broadband drives adoption of IPv6 and allows an increase in users,” said Campos of Paraguay.

The Union of South American Nations, which brings together 12 countries, is building a ring of more than 10,000 km of fiber optic to link the members of the bloc.