Headlines, Latin America & the Caribbean, Radio for the 21st Century 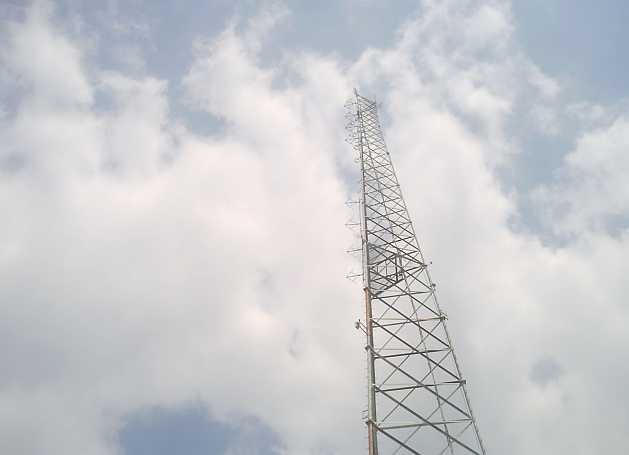 The last broadcast antenna installed in Kingston in the 1990s by Power 106 FM, a subsidiary of the Jamaica Gleaner newspaper. Credit: Zadie Neufville/IPS

KINGSTON, Mar 3 2012 (IPS) - In the last 25 years, there has been an explosion of commercial radio stations in what Jamaican broadcast professionals describe as “a revolution” that has extended the “mobility of radio”.

Radio remains the island’s most effective and fastest growing communications medium. From four stations in the late 1990s, Jamaicans today are able to access more than 70 stations – 30 of them are owned and operated on the island.

Radio Jamaica‘s (RJR) Yvonne Wilks told IPS that the rapid growth in the number of radio stations is due primarily to two events: the deregulation of the local tele-communications sector in 1999 and the simultaneous but lengthy divestment of the state-owned Jamaica Broadcasting Corporation (JBC) and its three satellite stations.

The former opened the telecoms sector to competition and the rapid expansion of the mobile telecommunications and Internet sectors; and the latter gave birth in the 1980s and 1990s to new programming formats.

The more flexible licensing regime allowed programme producers to start their own radio stations and diversify their offerings. In the modern radio landscape, the stations offer a diet of music, religious broadcast, talk shows, news and information.

Divestment continued to stimulate the growth of radio stations in the 1990s as the original investors supplemented operational costs by “‘renting space” on their broadcast towers. This among other things, created a dynamic competitive market place by removing the costly investment needed for start-up.

Alongside the divestment, deregulation had fuelled a rapid increase in the use of cell phones in Jamaica. From 90,000 users in 1999 at the end of Cable and Wireless’s monopoly on telephone service, the number of cell phone subscribers had grown to an estimated 3.1 million active users in 2010.

After its April 2001 launch, the Irish mobile phone company Digicel grew its customer base by 100,000 in its first 100 days. Wooed by Digicel’s offerings of low-cost mobile telephones and instant connection, Jamaicans took to the new technology.

Today, the company reportedly has a customer base of more than two million active subscribers. The introduction of feature and smart phones have also revolutionised the way radio and TV are delivered.

The state-of-the-art outside broadcast (OB) units, once owned by only the richest station owners, have been replaced by a variety of tools including cell phones, laptops, wireless broadband modems, and wireless transmitters.

Obsolete too are the dedicated phone lines that were absolutely necessary if broadcasts were to be carried from locations outside the studio, and the costs associated with them, radio engineer Melvin Cummings told IPS.

“Set-up has been reduced to hours and in some cases minutes, instead of days,” the 16-year veteran of radio broadcasts noted, adding that beginning with the introduction of transistor radios, innovation has been rapid and non-stop.

Cummings agreed that the speedy pace of development in a climate created by the combination of communication technologies and equipment related to mobile phones, radio and computing often sees broadcast professionals playing catch-up.

It was RJR that first introduced mobile phones to live broadcasting. The technology helped the station to retain its number one status – usually the first to file breaking news – until the late 1990s when it was toppled by some of the very stations it enabled.

According to former broadcaster Michael Bryce, the introduction of mobile phones to live reports revolutionised broadcast radio. It enabled journalists to file reports faster and from places previously inaccessible to traditional transmission means.

Bryce, a member of the reporting team covering Nelson Mandela’s visit to Jamaica in 1991, explained that the team was able to transmit live along the entire route from the Norman Manley International Airport to the Mona Campus of the University of the West Indies via a mobile phone that had been “rigged into the mobile unit”.

The now head of Consumer and Public Affairs in the Office of Utilities Regulations further explained, “We had to say on air that we were speaking from places we wouldn’t have been able to transmit from before we got the phone.”

When RJR shut down Jamaica’s last functioning AM transmitter on Mar. 30, 2009, it completed almost two decades of transition which saw a move from the AM band to FM and digital broadcast.

RJR’s leadership in the development of local radio goes back to 1939 and the half-hour weekly wartime broadcasts made by John Grinan, via his ham radio from his home in Kingston. Radio VP5PZ – Grinan’s call sign- was renamed ZQI in 1940 and later Radio Jamaica.

Fast forward to 2001 when veteran radio talk show host Barbara Gloudon visited and beamed her show from New York, a month after the 9/11 terrorist bombing of the World Trade Centre.

Radio Jamaica’s Yvonne Wilks noted that the entire talk show was broadcast from Ground Zero via cell phone. It was, she said, an indication of how far the technologies had come and a demonstration of the continued interdependence between radio and telecommunication technologies.

“There has been a convergence of technologies that has helped to keep radio alive at a time when TV has become a dominant medium,” she noted.

Since its early beginnings, developments in tele-communications and radio broadcast have been inextricably linked. These days, it is not unusual to see live broadcasts being transmitted via a wireless broadband modem affixed to a laptop.

“Radio is no longer a box on the table,” Wilks added, pointing to the newest trends of listening to radio via cell phone, television, or Internet. Radio currently operates four (three on cable) and TV three radio stations under the banner RJR Communications Group.

But inspite of its reach and flexibility, local researchers note, that there has been a fragmentation of the markets, accompanied by a falloff in ownership of radio units and listenership.

Whilst the fragmentation of radio markets has been in attributed in part to the growth of alternative stations, Bryce notes that the alternative listening devices like mp3 players has resulted in a more selective audience.

Some believe that in certain respects, technology has pushed Jamaica backward, to a time when “nighttime radio was a playlist on a reel- to-reel”. As stations cut costs to stay competitive, the all-night disc jockey has virtually disappeared, to be replaced by a computerised play list; stations now depend on centralised news production teams and salaries are very low.

But in the words of one veteran, mobile technology has enabled broadcasters to be more responsive to their audiences and made coverage more immediate.