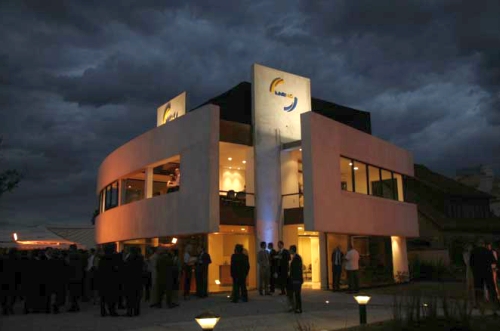 MONTEVIDEO, Apr 18 2012 (IPS) - The capital of Uruguay has become the headquarters of Latin America’s six leading Internet organisations, brought together in the same building.

The Tuesday Apr. 17 inauguration of the Casa de Internet de Latinoamérica y el Caribe, the regional Internet centre, on the seaside avenue along the Río de la Plata (River Plate) estuary in the upscale neighbourhood of Carrasco, makes Montevideo the foremost hub of organisations of this kind in the world.

“There is no other city in the world, or building, where so many organisations involved in this issue come together,” Raúl Echeberría, chairman of the Internet Society (ISOC) and executive director of the Internet Address Registry for Latin America and the Caribbean (LACNIC), told IPS.

The first of the six organisations is the regional chapter of ISOC, an international non-profit founded in 1992 dedicated to ensuring the open development, evolution and use of the Internet for the benefit of people throughout the world.

LACNIC, for its part, allocates and administers IP addresses in the region.

The Latin American and Caribbean Federation for Internet and Electronic Commerce (eCOM-LAC) is devoted to promoting the development of ICTs and e-commerce throughout the region.

The initiative of bringing these organisations together “in one place improves coordination and strengthens the institutionality of the sector and its capacity to assist in the process of development of the Internet,” a LACNIC press release says.

Broadband Internet access is key to economic development and social equality in the region, said Uruguay’s minister of industry, energy and mines, Roberto Kreimerman, who took part in the ceremony along with President José Mujica.

At the Sixth Summit of the Americas, held Apr. 14-15 in the Caribbean port city of Cartagena, Colombia, there was a consensus among the 34 participating countries that broadband Internet access is one of the keys to bolstering social equality, along with regional integration, and increasing value-added and technology in regional production.

The minister also referred to the work of the Union of South American Nations (UNASUR) to install a fibre-optic broadband ring in the region, to cut costs and improve connectivity.

There is no doubt “about the Internet’s potential for development,” Echeberría told IPS.

Of the approximately 600 million people in Latin America and the Caribbean, 40 percent have access to the Internet. Echeberría estimates that the proportion will climb to 60 percent by late 2015.

The region is in a process of “economic growth that is unique in its history,” the Uruguayan expert added. “This is the decade of Latin America. And to continue growing, we need strong, stable, secure, open Internet, with models of participative governance and the involvement of all actors.”

But many challenges remain, because Latin America still has the world’s largest gap between rich and poor.

According to ECLAC Executive Secretary Alicia Bárcena, “Broadband should become a regional or global public good, which is not for free but has to be for everybody.”

In Bolivia, for example, “if you are a farmer who is living away from urban areas, you have to come to the city to find out about product prices, for trading and for getting information. All that is key for your small and medium-sized businesses. Then you save a lot of money in terms of travelling, communication and paper work,” she told IPS in an interview in New York.

In that impoverished Andean nation, “if you want to have access to broadband of two megabytes you have to pay 300 dollars a month, which is 17 percent of the per capita income. That is the level of the gap. Internet access in Bolivia is thereby probably 40 times more expensive then in France and 100 times more expensive than in (South) Korea.”

In this respect, Echeberría said “we are facing the challenge of increasing the number of users, but also of reducing the internal gaps in the region. If we manage to do that, we will achieve an open, participative Internet that serves as a platform for the development of our population and as a catalyst for exercising human rights.”

Uruguay, where Internet penetration is 60 percent of the population – one of the highest rates in Latin America – was chosen to host the Casa de Internet de Latinoamérica y el Caribe because of a legal framework conducive to the installation of non-governmental international bodies, which are given tax breaks, the expert said.

The quality of telecommunications and the stability of the financial system also influenced the choice of Montevideo as a headquarters, he added.

* With reporting by Rousbeh Legatis in New York.