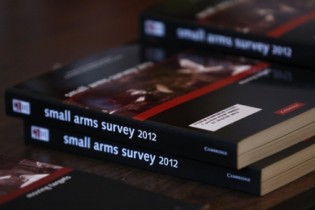 By Coralie Tripier
The Montreal Protocol, a climate treaty that gathers all U.N. member countries behind the goal of protecting the ozone layer, may not be the "most successful international agreement" anymore, as former U.N. secretary general Kofi Annan used to put it.

By Coralie Tripier
As heated negotiations on a global Arms Trade Treaty near their close Friday at United Nations headquarters in New York, members of civil society as well as some U.N. member states are highly disappointed by what they call the draft text's numerous loopholes.

By Coralie Tripier
The United States is suffering one of its most severe droughts in decades, leading to both widespread crop failures and increased public concern about the impacts of climate change.

By Coralie Tripier
Ecovillage at Ithaca (EVI), located in the beautiful Finger Lakes region of upstate New York, is an intentional community of 160 people striving for greater sustainability, a better quality of life, and perhaps even a new model for urban planners the world over.

A Sustainability Paradise : Ecovillage at Ithaca

By Coralie Tripier
Why can't we live a different way? That’s the question asked by a pioneer community of 160 trying to achieve greater sustainability and a higher quality of life.

By Coralie Tripier
In Uganda, like in many sub-Saharan African countries, same-sex relationships are illegal and punishable by incarceration in prison for up to 14 years, legislation that is supported by a majority of Ugandans and influenced by the lobbying efforts of U.S. evangelical churches.

By Coralie Tripier
On Saturday, Jun. 9 2012, the annual Capital Pride Parade brought together hundreds of thousands of lesbian, gay, bisexual and transgender (LGBT) people marching with their allies in the sunny streets of Washington DC.

By Coralie Tripier
The US military is facing one of its biggest scandals, depicted in "Invisible War", Kirby Dick and Amy Ziering's latest documentary.

By Coralie Tripier
The high seas, crucial regions of the world's oceans that are beyond national jurisdiction, account for 45 percent of the planet, but are today under severe threat from overfishing and pollution.

By Coralie Tripier
On the eve of the Rio+20 Summit in Brazil, the U.S.-based Natural Resources Defense Council (NRDC) released a report Monday ranking the world's biggest countries on their use of renewable energy.

By Coralie Tripier
The student movement that erupted in February following the announcement of a 75-percent rise in university tuition fees is now becoming a violent struggle for democracy in Quebec.
ADVERTISEMENT ADVERTISEMENT