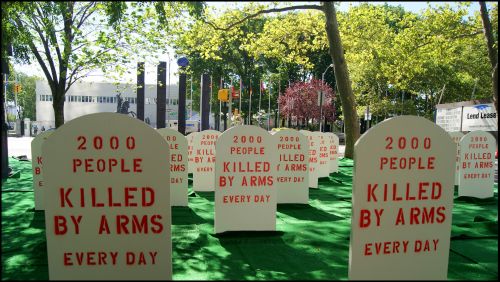 The Control Arms coalition demonstrated in front of the United Nations two days before the ratification of the Arms Trade Treaty, reminding delegates of the price paid every day by armed violence. Credit: Coralie Tripier/IPS

UNITED NATIONS, Jul 26 2012 (IPS) - As heated negotiations on a global Arms Trade Treaty near their close Friday at United Nations headquarters in New York, members of civil society as well as some U.N. member states are highly disappointed by what they call the draft text’s numerous loopholes.

The ambitious and long-awaited treaty, which is to be ratified on Friday, aims to “prevent, combat and eradicate the illicit trade of conventional arms”.

The text is “not looking good”, according to Control Arms, a global movement that campaigns for a legally-binding Arms Trade Treaty.

After days and nights of protracted negotiations, the 193 state parties seem to have come to an agreement that falls short of high expectations.

“This text is a leaky bucket, it has too many loopholes and gaps in it,” Anna McDonald, head of arms control for Oxfam, told IPS.

Among other things, observers are calling for countries to include ammunition in the treaty, which would currently cover only a handful of conventional arms.

“At the moment, the treaty is covering some weapons but not bullets, which are literally the fuel of conflict,” McDonald said.

“A gun without a bullet is just a heavy metal stick,” she added.

The treaty is based on a consensus agreement, which means that all 193 state parties involved have to agree for any clause to be adopted, thus leading to hours-long negotiations that have sometimes ended in the middle of the night.

Most of the regions of the world that suffer from high levels of armed violence, such as Africa, the Caribbean and the Pacific, have clearly stated that they wanted ammunition to be included in the treaty, but the United States firmly opposes it.

The inclusion of ammunition is also backed by most U.N. Security Council members, including Germany, France and Britain.

Its absence is a “massive weakness of the treaty,” Helen Hughes, a lead researcher on military and security issues for Amnesty International, told IPS.

The U.S., which is the world’s largest arms exporter, has explained its decision not to include ammunition by arguing that the regulation would be too complicated to implement.

“It doesn’t make sense,” McDonald told IPS. “The U.S. is the government that’s holding out the strongest against the inclusion of ammunition, but it actually regulates its own ammunition exports.”

NGOs such as Amnesty International, Oxfam and Control Arms are now calling on Washington to urgently change its position.

“The U.S. must listen to the voices of African states, to the ones that are experiencing problems of armed violence and conflict,” McDonald said.

With just three months to go before the U.S. election, President Barack Obama is thought by many observers to be afraid of angering the powerful gun lobby in the United States.

“Sadly for the millions of lives at risk elsewhere in the world, U.S. politics in an election year prevents the Obama administration from taking a bold stand to champion its own model laws,” Kathi Austin, executive director of the Conflict Awareness Project and former U.N. arms investigator, told IPS.

“President Obama is a crucial decision maker and the U.S. could stand up firm in terms of ensuring that these loopholes are closed in the final day of negotiations,” Hughes added.

But the exclusion of ammunition is far from the only disappointment in the draft text, activists say.

The section of the text dealing with arms middlemen, who are the biggest suppliers of weapons to terrorists and warlords, is only one sentence and has also come under a lot of criticism.

“Each State Party shall take the appropriate measures…to control brokering,” the draft states.

That is one “weak, watered down sentence with no teeth and no requirements”, according to Austin.

“The draft treaty language appears designed to let illegal gunrunners off the hook,” she told IPS.

“That is not exactly going to make the world a safer, better place,” she added.

According to the draft, it would also be the responsibility of each government to make a risk assessment before allowing an arms transfer.

State parties would thus have to ensure that their export of arms would only contribute to peace and security, but many have criticised what they consider an “escape clause”.

“(The governments) can still decide to go ahead if they want to,” McDonald told IPS.

“There must be unambiguous rules. The text should clearly state that when there is a risk that these arms might end up in the hands of human rights abusers or warlords, then that transfer must not go ahead.

“It’s as simple as that,” McDonald said.

According to Hughes, the text should contain a practical methodology of how to make that risk assessment.

“(Amnesty International) believes that you can objectively assess arms transfer… we look forward to how this could take place,” Hughes said.

Finally, sanctions following a violation of the treaty are not mentioned in the draft text, thus failing to provide a real legally-binding agreement.

“At the moment there is no provision on the criminalization at the national level… and (Amnesty International) would want that in,” Hughes said.

The absence of such sanctions means that a government’s arms exports could be used to commit violations of international humanitarian law, international human rights law as well as acts of terrorism and organised crime, thus debilitating the treaty.

One day is left to reach consensus before the Arms Trade Treaty, which was initiated at the U.N. six years ago, is ratified.

Observers are concerned that the treaty might not reduce the number of deaths and injuries which occur as a result of armed violence and conflict, should the draft be adopted in its present form.

According to Control Arms, nearly 750,000 people die from armed violence each year, and two of three live in countries at peace. A full ten percent of the world population owns small arms.

“The governments have got two days to change that text and turn it into a treaty that will really save lives and livelihoods,” McDonald told IPS. “Today is the day that they need to make these changes happen.”