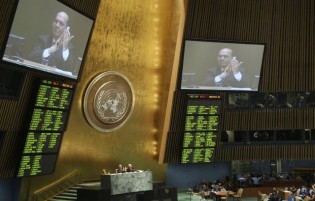 By Thalif Deen
When the United Nations hosted its biennial review meeting on the illicit trade in small arms last month, the conference room was overflowing both with pro-gun and anti-gun lobbyists.

By Thalif Deen
When the United Nations set out to draft a politically-sensitive Arms Trade Treaty (ATT), ever since negotiations began in 2006, member states agreed to take the final decision by "consensus".

By Carey L. Biron
U.S. weapons sales around the world have massively expanded over the past year, setting several records. Agreements for foreign arms sales in 2011 totalled around 66.3 billion dollars – three times higher than the previous year and constituting an "extraordinary increase", according to the Congressional Research Service.

By Emilio Godoy
“The United States should stop producing so many weapons, which cause us so much harm. That country also suffers from so much violence, as billions of dollars go into manufacturing guns.”

By Coralie Tripier
As heated negotiations on a global Arms Trade Treaty near their close Friday at United Nations headquarters in New York, members of civil society as well as some U.N. member states are highly disappointed by what they call the draft text's numerous loopholes.
Next Page »
ADVERTISEMENT ADVERTISEMENT