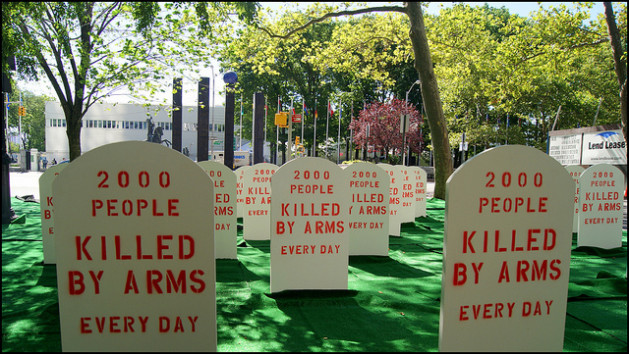 The Control Arms Coalition demonstrated in front of the United Nations in July 2012 to remind delegates of the price paid every day by armed violence. Credit: Coralie Tripier/IPS

WASHINGTON, May 31 2013 (IPS) - Advocacy groups here are stepping up a campaign to pressure President Barack Obama to quickly sign on to a new United Nations treaty aimed at regulating, for the first time, the international small-arms trade.

The Arms Trade Treaty (ATT), adopted by the U.N. in April following on years of preparation, opens for country signature on Monday. It passed with just three “no” votes, coming from Iran, North Korea and Syria, and will require the ratification of 50 countries to come into effect.

"The issue here is simply the symbolism of saying that [the U.S.] is committed to this on an international level." -- Rachel Stohl of the Stimson Center

“The U.S. has said that it feels its export control system is one of the best in the world, and that it would like to see those standards replicated in the ATT,” Clare Da Silva, legal advisor on the ATT with Amnesty International, told IPS.

She says she is confident that the United States will sign on, though it most likely will not be on Monday.

“There is nothing in this treaty that requires the U.S. to do anything differently,” Rachel Stohl, a senior associate at the Stimson Center, a think tank here, said at a panel discussion Friday. “Rather, the issue here is simply the symbolism of saying that [the U.S.] is committed to this on an international level – that’s really important.”

For the first time, the ATT states that if a country knows its weapons will be used to commit genocide or violate a U.N. arms embargo, they cannot be transferred. Stohl believes the ATT has the potential to address some U.S. national security and foreign policy concerns, including terrorism.

A significant majority of U.S. allies, human rights and religious groups have supported the treaty, the passage of which was seen as a key victory for the United States. And while many groups are now calling on President Obama to sign on to the ATT immediately, others are saying he will need to do so no later than the U.N. General Assembly meeting in September.

“If he doesn’t do that, the momentum behind the force will be undermined,” Daryll Kimball, executive director of the Arms Control Association, a bipartisan advocacy group here, said Friday.

“U.S. credibility will be questioned, we are going to be pulling the rug out from under our allies, and the president is going to have a lot of explaining to do.”

According to both Kimball and Stohl, other countries will be looking to the U.S. to sign on before they make their final decisions. Neither Russia nor China, for instance, has announced whether they will sign the ATT, and analysts suggest that these decisions will hinge on the U.S.’s own moves.

“The U.S. is the largest weapons exporter in the world,” Stohl says. “So people will look and say, well if its okay with the United States, then [signing the ATT] must not be too damaging to legitimate trade.”

The Obama administration has formally supported the ATT, a turnaround from previous U.S. policy under George W. Bush.

Nonetheless, it appears unlikely that the United States will sign the treaty on Jun. 3. Observers say this is due simply to typographical errors in translations from the original English text, however, which are currently being corrected following which countries will have three months to lodge comments.

Even once the Obama administration does sign on, the U.S. Congress will still need to approve the ratification before it can be signed into law. According to Amnesty International’s Da Silva, many international treaties never get ratified, and she does not expect to see the ATT made into law anytime soon.

Indeed, Republican politicians have already moved to pass legislation specifically barring the United States’ ratification of the ATT, while gun-rights advocates here continue to see opposition of the treaty as a primary rallying point. The majority of this opposition has come from the National Rifle Association (NRA), a lobby group.

“The text of the approved treaty is deeply problematic and threatens the rights of privacy of American gun owners,” the NRA says on its website.

In fact, the ATT deals solely with the international arms trade between governments. Nonetheless, this opposition has been so strong that U.S. delegation specifically wrote into the ATT text language that no infringement will occur for recreational, cultural, historical and lawful ownership.

Still, the Stimson Center’s Stohl notes that there remains an important opportunity for the United States to set an example.

“The symbolism is not that there has to be any change to U.S. law,” she told IPS. “Rather, it would be sending a signal to the rest of the world that the United States, which is responsible for 75 percent of the arms trade, is taking on this obligation as the world’s largest [arms] exporter.”

Following a recent legislative defeat of President Obama’s attempts to strengthen domestic gun laws – unrelated to the ATT – Stohl notes that the treaty could be an opportunity for the administration, as well.

“Here’s an opportunity to say, the NRA didn’t like this and we did it anyway,” she says.

“Do they sign it in a moment when the world is paying attention? We hope so,” he said at Friday’s panel discussion.

“Do they wait until Congress isn’t paying attention and the NRA has probably gone to bed for a couple of weeks? We hope not. We hope they use the moment to continue to build political momentum”.