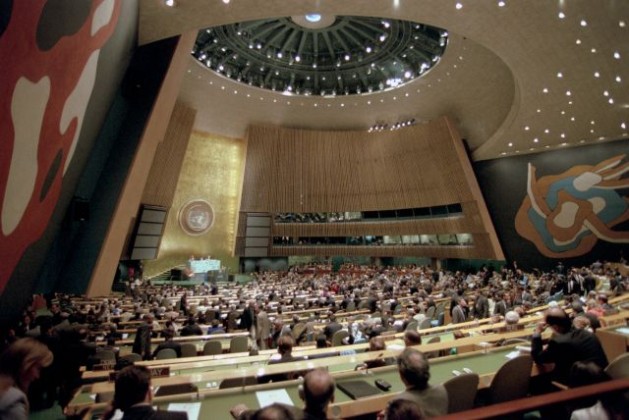 With just three countries opposing it in the General Assembly, the ATT will be open for signature on Jun. 2. Credit: UN Photo/Susan Markisz

UNITED NATIONS, Apr 11 2013 (IPS) - When the 193-member General Assembly voted overwhelmingly for a long outstanding Arms Trade Treaty (ATT) last week, there was a lingering question left unanswered: how long will it take to reach the 50 ratifications necessary for the treaty to be legally binding?

Asked for his prediction, Ambassador Palitha Kohona, a former head of the U.N. Treaty Section, told IPS, “It is difficult to tell when this treaty will enter into force.”

She told IPS that in terms of ratification and entry-into-force (EIF), the ATT formulation of 50 is actually quite achievable within the next few years despite the political struggles inherent in national government ratification processes.

“I would say it is very likely that EIF will occur in less than five years,” she predicted.

Adopted by a vote of 154 (Angola has since switched from “abstain” to “yes” making it 155 countries supporting the treaty) to three against (Iran, Syria and North Korea), the ATT will be open for signature on Jun. 2.

But ratification of the treaty, mostly by legislative or executive bodies of each of the member states, could be a long drawn-out process.

Kohona said some important countries, including China, Russia and India, have expressed serious reservations about the ATT text.

Others may have to overcome domestic difficulties, he added.

“You will recall that the Comprehensive Nuclear Test Ban Treaty (CTBT), adopted by vote in September 1996 in the General Assembly, after failing to obtain consensus in the Commission on Disarmament, has still not satisfied the conditions necessary for entry into force (17 years after adoption),” said Kohona, who is also Sri Lanka’s Permanent Representative to the United Nations, and who abstained on the vote.

Asked whether General Assembly approval is only a political and moral obligation on the part of member states, and with no legal force, Kohona said under the Law of Treaties, a treaty on signature creates certain limited obligations for the signatory states.

“Adoption, per se, does not. It is on ratification/accession and entry into force that a treaty imposes binding legal obligations on the parties,” he explained.

Prizeman said taking into consideration the wide and robust support for the ATT across Africa, Latin America and the Caribbean, as well as the European Union, it is likely that 50 states would ratify the treaty within the next few years.

The majority of states – reflective of the 155 votes in favour of the resolution – have expressed relatively categorical support for the ATT, if not calling for even more robust provisions than what is found in the text, she added.

Last week, a coalition of about 50 U.S. senators said they will oppose ratification, amid an anti-ATT campaign spearheaded by the National Rifle Association (NRA), one of the most powerful pro-gun lobbies in the United States.

Widney Brown, senior director of International Law and Policy at Amnesty International, told IPS, “The key to enforcement is transparency and peer pressure.”

She pointed out that the important elements of enforcement are that all exports must be reported to the Secretariat and that information will be shared with other states.

“If one state thinks another is failing to comply with the terms of the treaty, there will be a dispute mechanism to address the issue. But peer pressure to conform will be strong,” she added.

Secondly, even if China (currently about number six on the list of arms exporters) does not ratify, “I think we will see what we saw during the negotiations” — there will be strong pressure from African states on China to support the treaty, Brown said.

Russia, she said, is more problematic — particularly as it is trying to regain lost market share.

Brown said India did not play a helpful role in the negotiations, but like other emerging powers wants to be seen as a key player on the international stage and may be vulnerable to pressure to adhere to the treaty, even if it does not ratify.

“The United States, as you know, voted for the treaty although ratification is unlikely, but I think we will see significant compliance,” she said.

Where it will get tricky will be in decisions regarding transfers to Washington’s Gulf allies such as Bahrain, said Brown.

Prizeman told IPS that previous iterations of the ATT text had featured higher formulations (65), which would have, of course, elongated the EIF process.

The ATT “supportive” states were keen to lower the EIF formulation so that the ATT would not become a victim of the perpetual “waiting-to-enter-into-force limbo” that the Comprehensive Test Ban Treaty (CTBT) endures.

Moreover, also unlike the CTBT model, additional EIF obstacles such as qualitative provisions, including a requirement that the 10 largest exporter states ratify the treaty before EIF, ultimately did not make it into the final ATT text – although such proposals were supported by a group of states, mostly the emerging importer states concerned over potential manipulation of the treaty’s provisions, she added.

Brown said, “As someone who has worked primarily with human rights treaties, it has been quite interesting to understand the dynamics of what is in part a trade treaty.

“Also remember that there are only about 40 countries that actually do trade in arms, ammunition and parts and components, but the five permanent members of the U.N. Security Council (the UK, United States, France, China and Russia) plus Germany account for the vast majority of those transfers. So the remaining 36 states account for perhaps 30 percent of all transfers.”

If one state does its assessment and finds under the terms of the treaty that the transfer should not happen and another state swoops in a grabs that deal – the second state is going to be called out by the first state, Brown said.