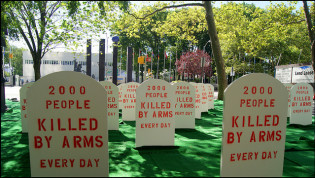 By Johan Galtung
The media did their best to make the U.S. presidential election look important, the altar on which democracy is built. But there has been a problem ever since the Supreme Court legalised unlimited campaign spending (six billion dollars this year), thereby authorising one more freedom of expression, called "commercial speech" even though much of this speech is libellous, often neither true nor relevant.

By Coralie Tripier
The protracted negotiations on an Arms Trade Treaty (ATT) with the ambitious aim of eradicating the illicit trade in conventional arms hit a deadlock Friday at United Nations as Washington, Moscow and Beijing required "more time" after six years of preparatory meetings.
ADVERTISEMENT ADVERTISEMENT