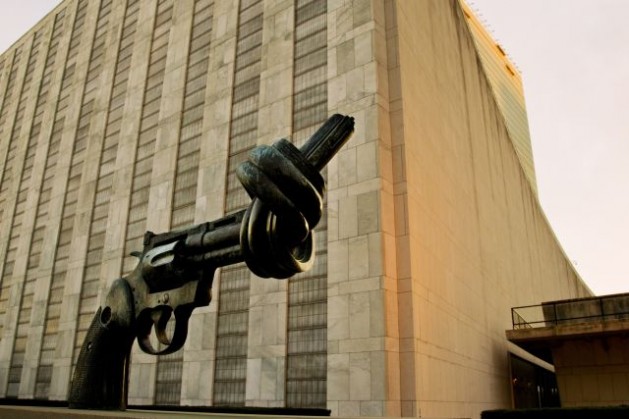 UNITED NATIONS, Dec 27 2012 (IPS) - Amidst a politically divisive debate on gun control in the United States following a rash of mass shootings, the United Nations will meet in March to finalise an Arms Trade Treaty (ATT) after nearly two decades of negotiations.

Dr. Natalie Goldring, a senior research fellow at the Center for Security Studies at the Edmund A. Walsh School of Foreign Service at Georgetown University, told IPS the upcoming conference probably represents the last opportunity to reach an Arms Trade Treaty within the U.N. structure.

“If this conference fails, supporters of an ATT are likely to look outside the U.N. for the next stage of negotiations, as was the case with the Landmine Treaty,” said Goldring, who has been monitoring negotiations since the early 1990s.

She said the real test of the ATT will be whether it helps set strong international standards for the arms trade.

If it helps bolster international human rights and humanitarian law, she argued, it will be a success, and it will save lives.

“If a weak ATT is negotiated, it may undermine existing practice and international law. Simply put, a weak ATT could be worse than not having an ATT,” warned Goldring.

All six major arms-exporting countries – China, France, Germany, Russia, the UK and the United States – voted for the resolution.

The conference is expected to approve a treaty to regulate the estimated 73-billion-dollar global arms trade. In 2011, the United States alone concluded arms agreements worth 66.3 billion dollars, according to the Congressional Research Service.

The current draft text, which will be the negotiating document next March, has been kicked around since July 2012.

The National Rifle Association (NRA), the most powerful gun lobby in the United States, has opposed the treaty on the mistaken belief it will hinder or deprive gun ownership in the country.

Brian Wood, arms control manager at Amnesty International, said the upcoming meeting will be the final leg of a 17-year campaign by his London-based human rights organisation and its partners.

The primary objective, he said, was to achieve an arms trade treaty to help protect people on the ground who, time and again, have borne the brunt of human rights violations during armed repression, violence and conflicts around the globe.

“We know sceptics will keep trying to undermine the human rights rules in the final treaty, but Amnesty International and its partners will keep up the pressure to secure the strongest possible text that protects human rights,” Wood said.

Last July, after nearly a month of negotiations, U.N. member states were close to an agreement on the proposed treaty.

But the U.S. delegation announced on the last day of the conference that it would not be able to support the draft treaty text that had been negotiated, and that insufficient time remained to reach agreement on a revised text.

With that statement, and the concurrence of other key arms suppliers, the talks collapsed.

Since the mid-1990s, the NRA has opposed U.N. efforts to reduce gun violence. It was unsuccessful in blocking the Programme of Action on Small Arms and Light Weapons in 2001.

“And I believe they will also fail in their efforts to prevent the signing of an Arms Trade Treaty,” Goldring predicted.

The proposed ATT does not affect civilian possession of weapons, and NRA efforts to claim otherwise are at best misleading, she said.

“The NRA’s outrageous statements about the ATT seem designed to mobilise their supporters. Their tactics may also be effective as a fundraising tool. But there’s no factual basis for the NRA’s claims,” Goldring added.

Ironically, the NRA’s trumped-up objections to an ATT free the U.S. government to negotiate a strong treaty, she said.

“If an ATT is unlikely to be ratified in the United States in the near term, there’s little incentive to compromise with U.S. senators who oppose a strong treaty,” she said.

“The political environment is quite different (since the November presidential polls). My hope is that President (Barack) Obama’s convincing re-election victory last month will help ensure that the U.S. delegation advocates a strong ATT now and in the negotiating conference next spring,” Goldring said.

Meanwhile, the biggest stumbling block to a strong ATT is the continued emphasis on consensus. If even a single delegation announces that it is unable to support consensus on the treaty, it will not be agreed.

“By insisting on consensus adoption of a treaty, the U.S. government has a veto over a prospective treaty,” said Dr Goldring.

“But it also gives every other country a veto, including sceptical delegations such as Iran, Pakistan, Cuba, and Egypt. This reduces the likelihood of success in March,” she added.

The U.S. government has made clear its refusal to accept a treaty with any provisions that would restrict civilian possession of firearms in the United States. It has even published its “diplomatic redlines” on the Department of State website, an action that may be without precedent in this context.

Thus far the U.S. government has also opposed any inclusion of ammunition or explosives in the treaty, which Goldring considers “short sighted”.

“At a minimum, all countries should be required to track ammunition when it is exported, as the United States already does. To be effective, an ATT must include all types of transfers and all types of conventional weapons, including their parts, components, and munitions,” she said.