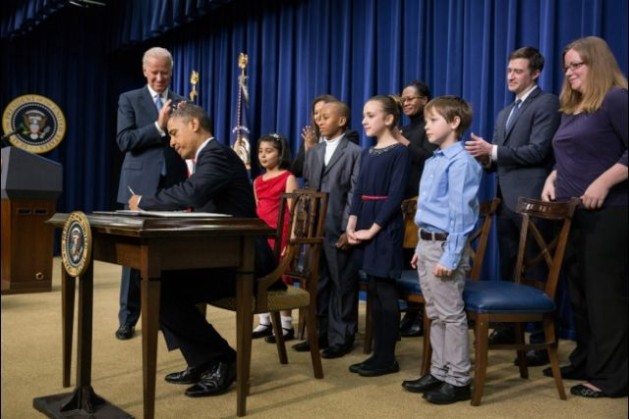 The call comes just ahead of a final round of negotiations towards an Arms Trade Treaty (ATT), slated to be held Mar. 18-28 at the United Nations in New York. Advocates, particularly in Africa and Latin America, are pushing for an ATT that would fill a longstanding and fundamentally dangerous anomaly – the almost complete lack of international regulation on the international trade in conventional arms, worth an estimated 70 billion dollars a year.

“The U.S. and other arms supplier states have both a moral duty and a national security interest to achieve such a Treaty in order to protect human rights and save the lives of innocent civilians caught in the crosshairs of conflicts fuelled by the irresponsible international conventional weapons trade,” the laureates state in an open letter.

“The absence of effective, legally binding international rules regulating the arms trade represents a colossal failure of the international community. Now is the moment to right this profound injustice. It is time to act to end this humanitarian and human rights crisis.”

The focus on Washington’s role in the ATT negotiations is particularly pertinent for two reasons. First, the United States is by far the world’s largest producer and exporter of weapons, in 2011 exporting nearly 10 billion dollars’ worth of arms, according to the Stockholm International Peace Research Institute.

Second, it was U.S. negotiators that ended the last round of ATT talks – which stretched for nearly a month last July – inconclusively, stating on the last day of discussions that they needed additional time to study the draft text.

“They’ve had that time now, and during that period more than 300,000 additional people have lost their lives due to violence – time is running out,” Anna Macdonald, an arms control campaigner with Oxfam International, a humanitarian aid organisation, told IPS.

“We really need the U.S. to be a part of this and, really, there’s no reason it shouldn’t support the ATT. The United States already has pretty strong regulations in place on this issue, and there’s nothing in this treaty that could be considered a threat. It’s also consistent with the government’s stated aims on seeing a reduction in armed conflict and violence.”

Politically, however, the issue remains fraught in Washington. The powerful U.S. gun lobby has long used the “threat” of an ATT to raise contributions, warning that the treaty’s passage would infringe on the U.S. Constitution’s Second Amendment, on the “right to keep and bear arms”.

In the lead-up to next week’s discussions, however, ATT advocates have mounted a campaign to assure U.S. gun-owners that the treaty would not impact on the domestic industry. This stance was bolstered in late February when the American Bar Association, the country’s premier legal grouping, published a briefing paper that found that “the proposed ATT is consistent with the Second Amendment”.

Next week’s talks will again require full consensus by negotiators, a rule that allowed July’s sessions to be scuttled. In the U.N. General Assembly resolution that mandated the upcoming ATT session, however, countries voted overwhelmingly to require any unagreed-upon text to progress to the General Assembly for a simple majority vote.

For this reason, most observers are expecting a treaty of some kind to be agreed upon this year. As such, advocates say, next week’s talks will be the last chance to close a series of loopholes that could compromise the efficacy of the draft text.

A new brief, released Tuesday by Oxfam and Saferworld, a UK advocacy group, notes that the draft treaty includes “some very positive elements”. But it warns over “numerous caveats and exemptions” that would keep the treaty from reining in the “unscrupulous middle-men who are so often at the centre of illicit and irresponsible international arms transfers.”

The organisations are drawing particular attention to the fact that the ATT draft currently exempts military aid and defence cooperation, and does not cover ammunition.

The defence cooperation exemption was introduced by India during the July negotiations, but reports suggest that many countries are against its inclusion. Oxfam’s Macdonald says that, today, the provision would allow the Russian government to continue to arm the Syrian government, despite the clear human rights implications.

“This Russia-Syria situation is one of our litmus tests: Would the ATT make those transfers illegal?” Macdonald says. “The new ATT needs to be strong enough to be able to send a clear signal to those using weapons for genocide, etc., that the majority of the world’s governments have said enough is enough.”

She continues: “We’ve seen this with other international treaties – for instance, on the use of landmines. Even if governments don’t sign up to the treaty, they still basically adhere because the agreements have created such a high standard.”

Inclusion of ammunition is also widely seen as a crucial provision in the new ATT. Ending this loophole is being actively pushed by African and Latin American countries – those that have been most devastated by gun violence.

“As an African physician, I have seen too much personal human suffering from gun violence,” Robert Mtonga, co-president of International Physicians for the Prevention of Nuclear War, a 1985 Nobel prize recipient and signatory of the new letter to President Obama, said Thursday.

While Mtonga too is urging President Obama’s support, noting it would “enhance the prospects for achieving this urgent humanitarian agreement”, Washington is actually one of the staunchest proponents of the ammunition loophole. And that does not appear to have changed in recent months.

According to an unusually lengthy statement to the press in late February, a U.S. government spokesperson made a case that ammunition is a “fundamentally different commodity than conventional arms … and cannot be marked in any practical way that would permit it to be tracked or traced.”