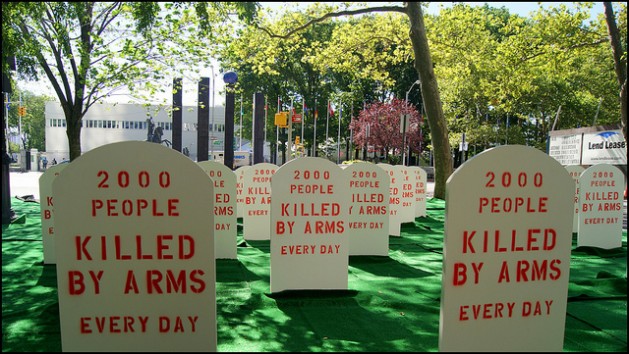 The Control Arms coalition demonstrated in front of the United Nations on Jul. 25, 2012, reminding delegates negotiating the ATT of the price paid every day by armed violence. Credit: Coralie Tripier/IPS

WASHINGTON, Feb 12 2013 (IPS) - With a new round of negotiations for an international treaty regulating the international trade of small-scale weapons slated for next month, advocates here have stepped up a campaign to clarify what exactly the treaty is trying to accomplish – and to eliminate some opposition to the treaty from within the U.S. Congress that, they say, is based on misinformation.

The National Rifle Association (NRA), a lobby group, “and its allies have mounted a campaign of lies and deliberate distortions to build American opposition to an international Arms Trade Treaty (ATT) that will keep weapons out of the hands of human rights abusers around the globe,” according to a campaign launched Tuesday by Oxfam America, an international humanitarian group.

Warning that there are far more regulations on the international sale of fruit or electronics than for many weapons, Oxfam and other campaigners are calling for a treaty that includes a prohibition on arms transfers if it is clear they will facilitate mass atrocities; that includes all “conventional” weapons and ammunition; and that does not include loopholes for any specific countries.

“Prior to the last few months, the ATT seemed like a way for the NRA to mobilise its base when there was no real discussion in Congress on gun control – they had to find a new bogeyman, and that was the U.N.”

Under the auspices of the United Nations, negotiations towards an ATT will recommence for 10 days in late March in New York.

Following three years of preparations, a month of talks on a draft ATT were shelved in late July when representatives from the United States, together with the Russian and Chinese delegations, made a surprise announcement that they needed more time. That declaration came after civil society observers had expressed increasing frustration at procedural delays and an apparent lack of seriousness on the part of some negotiators.

The end of the July round of talks also coincided with a forceful campaign against any treaty by the NRA, which for years has been the strongest voice against gun control here in the United States.

In late July, the NRA publicly took credit for “killing” the ATT, and for letters to the president from dozens of members of the U.S. Congress (from 51 senators and 130 representatives) noting “strong opposition” to any treaty.

But just a day after his re-election, in early November, President Barack Obama signalled his intent to move forward on a new round of talks.

“Just as the NRA warned would happen,” the group stated in response to Obama’s statement. “Needless to say, our position will remain the same on any treaty that could adversely affect the rights of American gun owners.”

In mid-January, a Republican state senator in Virginia tabled a resolution opposing any future ATT, despite the fact that the treaty’s text remains far from finalised.

The NRA’s position is based on two purported grievances: first, that an ATT would infringe on the Second Amendment of the U.S. Constitution (on the “right to keep and bear arms”), and, second, that such a treaty would require countries to create national registries on gun owners.

Yet according to a new Oxfam America policy brief distributed to members of Congress on Tuesday, neither of these points holds up under any scrutiny.

On the first point, the draft ATT text, which will serve as the starting point for the March negotiations, states that regulation of conventional arms within national territory will remain the “sovereign right and responsibility” of each national government. It also explicitly recognises the traditional uses of guns for hunting and related activities.

On the second point, the treaty only covers the official import or export of weapons by national governments, and does not extend to domestic ownership. Further, the draft text only directs importing states to take steps to prevent weapons from entering the “illicit market or for unauthorized use”.

(By deadline, the NRA had not responded to request for comment for this story.)

“While it’s hard to say exactly what the impact of the NRA’s advocacy was on the negotiations, it’s interesting that most of what they were discussing was outside of the scope of the ATT talks,” Scott Stedjan, Oxfam America’s senior policy advisor, told IPS.

“Prior to the last few months, the ATT seemed like a way for the NRA to mobilise its base when there was no real discussion in Congress on gun control – they had to find a new bogeyman, and that was the U.N.”

As Stedjan notes, however, following the killing of more than two dozen people at an elementary school in the state of Connecticut in December, Washington lawmakers are currently engaged in the most significant policy discussion on gun control in decades, and the NRA is widely seen as being on the defensive.

It is important to note that there is no direct connection between the Washington discussion on domestic legislation and the upcoming ATT talks in New York. In this new context, however, Stedjan says his office is “hopeful” that the NRA will turn its focus to the domestic policy debate and roll back its opposition to the ATT.

Others too are cautiously optimistic about the outcome of the March negotiations, citing extremely high international support and new procedural considerations.

An indication of that support came following the breakdown of talks in July. During a subsequent gathering of the U.N. General Assembly, there was unanimous backing for another round of related negotiations – the first time this had happened.

Further, in voting to allow another round of talks, the General Assembly tweaked the rules for agreement.

Ahead of last year’s discussions, President Obama had stipulated that any eventual ATT draft had to be agreed upon by consensus. If no agreement is arrived at in March, however, the issue will now be allowed to go to a vote in the General Assembly, where no consensus is required.

“There is reason for optimism that states will conclude an Arms Trade Treaty this year, but what’s most important is creating a strong treaty,” Jeff Abramson, director of the secretariat for Control Arms, an international civil society network, told IPS.

“Given that a treaty text will still be allowed to move ahead later in the year even if a single or small minority blocks consensus in March, this arrangement should enable states that want a strong treaty to succeed in securing one.”

Oxfam’s Stedjan agrees, noting that the ATT “must be able to impact on human rights around the world. If there is no agreement, we’re strongly encouraging negotiators not to sacrifice the substance of the treaty for the sake of consensus.”