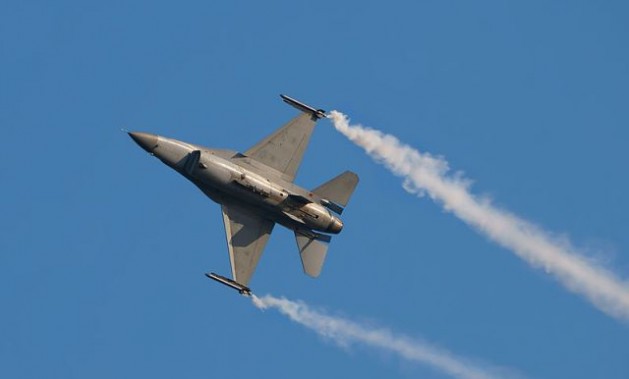 A Belgian F-16 Fighting Falcon during a training flight before the Air Show 2009 in Radom, Poland. Credit: Konflikty.pl/ cc by 2.0

UNITED NATIONS, Feb 21 2013 (IPS) - When a 20-year-old went on a deadly shooting spree killing 26 students and teachers in an elementary school in Connecticut last December, there was the inevitable outcry either for a ban or a tight control on gun shows, where firearms can be purchased over the counter with no background checks on the buyer.

But there are no such controls on weapons buyers at international trade fairs, resulting in arms sales to some of the world’s most repressive regimes and human rights violators.

As military exhibitions and air shows continue to proliferate – from Paris and London to Moscow and Abu Dhabi – the United Nations will meet next month for its last stand on an Arms Trade Treaty (ATT) aimed at laying down guidelines for the international trade in weapons.

If their proposed human rights rules and brokering controls in the treaty remain weak, companies will continue to garner hundreds of millions of dollars worth of weapons deals for unscrupulous buyers.

Focusing specifically on the International Defence Exhibition (IDEX), currently taking place in Abu Dhabi, capital of the United Arab Emirates, the London-based Amnesty International (AI), says China, the United States, the European Union (EU) states and other arms-exporting countries must ensure that any deals brokered at IDEX do not result in weapons reaching countries where they could contribute to serious human rights abuses.

IDEX is described as one of the world’s biggest arms bazaars where most of the major arms exporters actively participate.

Helen Hughes, AI’s researcher on arms control, security trade and human rights, told IPS that arms fairs and exhibitions are used to identify and promote the demand and sources of supply for customers of particular military and security products and services, and for announcing major arms deals and contracts.

“Opportunities for brokering deals at such international fairs are numerous, yet there are usually no procedures to monitor or licence the brokering of specific arms deals as opposed to general sale promotions,” she added.

The upcoming international arms trade fairs include the Paris Air Show in June; the Defence and Security Event in London in September; MAKS 2013, billed as an international aviation and space salon, in Russia, also in September; the Singapore Air Show in February 2014; Eurosatory in Paris in June 2014; and the International Aviation and Aerospace Exhibition in China in November 2014, described as the “only trade show endorsed by the Chinese central government”.

In a statement released Wednesday, AI said IDEX is taking place less than a month before states convene at the United Nations “to finalize a historic Arms Trade Treaty where the United States, China and some other states are hoping to get weaker treaty controls”.

AI says it has repeatedly flagged how the poorly regulated global arms trade contributes to war crimes and other serious human rights violations around the world, and since the 1990s has highlighted the problem of unregulated arms brokering.

“The wide array of conventional weapons being displayed at IDEX stands in sharp contrast to the narrow scope of items proposed by the USA, China and other states for the draft Arms Trade Treaty,” says Brian Wood, AI’s head of Arms Control and Human Rights.

“And if their proposed human rights rules and brokering controls in the treaty remain weak, companies will continue to garner hundreds of millions of dollars worth of weapons deals for unscrupulous buyers,” he warns.

Among the more than 1,100 companies from almost 60 countries participating at IDEX, AI says it has been able to identify a number of manufacturers from key arms-exporting countries whose products have previously been used in areas where serious human rights abuses have taken place.

Asked about the “non disclosure” clauses in military contracts, Hughes told IPS, “Yes, most contracts will have non-disclosure clauses but often information about arms deals, arms sales or arms supplies will come out into the public domain, for example reported in the press.”

Interestingly, she pointed out, governments will cite “commercial confidentiality” when asked for more information about an arms export they have licensed, such as questions about the exact type of weapon, quantity, end-user and end-use even though some states do publish such information – albeit inconsistently, and not with enough detail to allow for adequate public scrutiny.

As part of the forthcoming final negotiations on an ATT, Hughes said, governments should agree that states’ annual reports cover data on all transfers and activities and be open to public scrutiny.

Meanwhile, AI points out that state-owned arms manufacturers from China, exhibiting at IDEX, have heavy weaponry, such as artillery systems, on display.

Among the manufacturers exhibiting such less-lethal weapons are two companies from the United States and France whose tear gas has been used in Bahrain.

AI also says that another U.S. firm has supplied such weapons to Egypt.

In both Bahrain and Egypt, protesters have died or been severely injured during 2011 and 2012 as a result of the security forces allegedly misusing tear gas.

And one exhibitor from South Korea is also promoting cluster munitions, an inherently inhumane weapon. So far 111 states have signed, ratified or acceded to a separate international treaty banning these weapons.