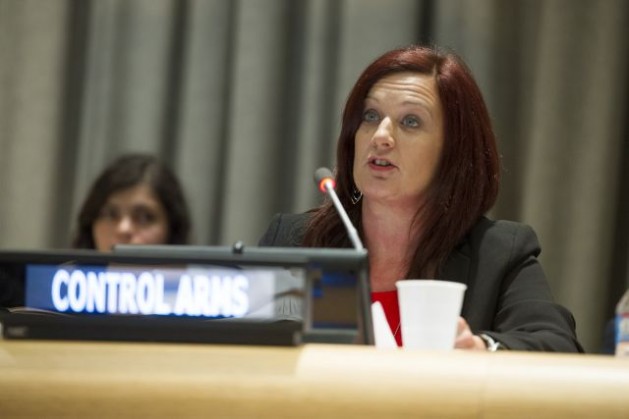 Anna Macdonald, Oxfam's Head of the Control Arms campaign, speaks at a special event marking the opening for signature of the ATT in June 2013. Credit: UN Photo/Eskinder Debebe

UNITED NATIONS, Jul 2 2014 (IPS) - When the United Nations hosted its biennial review meeting on the illicit trade in small arms last month, the conference room was overflowing both with pro-gun and anti-gun lobbyists.

Mercifully, no one was packing a gun, nor was anyone forced to surrender weapons at the door – wild West-style – in a world body advocating peace and disarmament.

"The simple truth is the ATT does not affect the domestic trade in weapons in the United States." -- Dr. Natalie J. Goldring

Of the 59 non-governmental organisations (NGOs) accredited to the meeting, about 15 percent were pro-gun groups whose longstanding refrain echoed in the chamber: “Guns don’t kill people, people kill people.”

The meeting was meant to review the 13-year old Programme of Action (PoA) to Prevent, Combat, and Eradicate the Illicit Trade in Small Arms and Light Weapons.

The gun lobbyists had one overarching message: about 60 percent of the world’s small arms were legally-owned and should therefore be excluded both from the PoA and the 2013 Arms Trade Treaty (ATT).

Rebecca Peters of the Women’s Network of IANSA, an international network of hundreds of civil society groups campaigning against gun violence, told IPS a positive outcome of the meeting was a gender-empowered message: women should play a larger role in national policies controlling guns.

She pointed out that most policies on guns do not take into account the experiences and views of women and most countries do not prevent domestic violence offenders from owning guns.

“This decision helps us to push for policies more in line with the interests of communities,” she added.

When the ATT was adopted by the General Assembly back in 2013, the vote was 154 in favour, three against and 23 abstentions.

The vote was necessary because Iran, Syria and North Korea blocked the consensus adoption of the treaty within ATT negotiations.

The treaty will come into force only with 50 ratifications. So far it has received 41, Sweden being the latest country to ratify.

Dr. Natalie J. Goldring, a senior fellow with the Security Studies Programme in the Edmund A. Walsh School of Foreign Service at Georgetown University, told IPS, “My best guess is that we’ll reach the 50 ratifications needed for entry into force within the next three to four months.”

She said some countries may be waiting to deposit their instruments of ratification during the high-level segment of the General Assembly in September in order to increase public attention to the treaty and to their participation in it.

“But if they want to be among the first 50 countries ratifying the treaty, they may not want to wait that long,” said Dr Goldring, who also represents the Acronym Institute on conventional weapons issues at the United Nations.

With 50 ratifications, the clock starts, and the treaty comes into force 90 days later.

Speaking at a special event marking the opening for signature of the ATT last year, U.N. Secretary-General Ban Ki-moon, a strong proponent of disarmament, said: “The world has decided to finally put an end to the free-for-all nature of international weapons transfers.

“It would make it harder for weapons to be diverted into the illicit market, to reach warlords, pirates, terrorists and criminals, or to be used to commit grave human rights abuses or international humanitarian law violations,” he warned.

Still, some of the major arms exporting countries have neither signed nor ratified the treaty.

The good news is that Germany, France, the UK, Spain, and Italy have all ratified the treaty, she said.

They are five of the 10 countries the Stockholm International Peace Research Institute (SIPRI) indicates were the top exporters of major conventional weapons from 2008-2012.

“Unfortunately, the United States, the world’s largest arms exporter, has signed but not ratified the treaty. Russia, China, Ukraine, and Israel haven’t even signed the treaty yet,” she added.

Dr Goldring also pointed out the political climate in the U.S. Senate does not support ratification, and may not for several years.

She said too many senators appear to have believed falsehoods about the treaty promoted by the National Rifle Association (NRA), the most powerful gun lobby in the United States.

Peters told IPS the ideal is to have all the major arms exporters ratify and comply with the treaty, but the absence of some of them isn’t fatal.

For one thing, she said, blocking some irresponsible arms transfers is better than blocking none.

“But also, we have seen with other treaties (eg the Mine Ban Treaty) that non-ratifying countries tend to move toward compliance anyway because of peer pressure but also market pressure”.

“So, when the treaty comes into force, it will definitely be a cause for celebration, even if China and Russia don’t ratify it. Of course, it will take a few years before we can tell what difference the treaty makes in preventing armed violence,” noted Peters.

Dr. Goldring said the ATT’s entry into force is a first step toward better control of the international trade in conventional weapons.

The real test will be the extent to which countries take a new look at the weapons they are importing and exporting and pay greater attention to the effects of these transfers.

Over time, she said, this treaty has the potential to significantly alter the global arms trade, just as the Ottawa Convention has done with landmines.

“But it’s likely to be a long process, we’re [only] at the beginning right now,” she said.