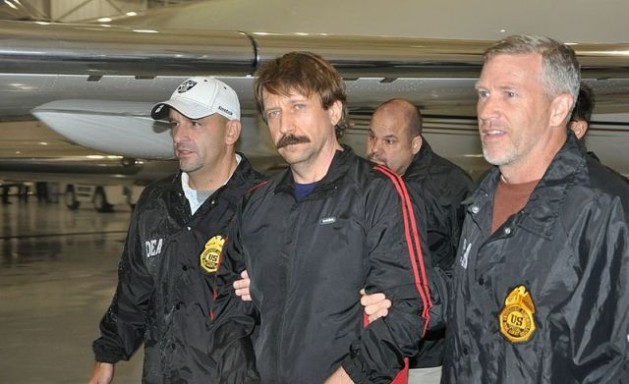 Viktor Bout is extradited to the United States aboard a Drug Enforcement Administration plane on Nov. 16, 2010. Credit: DEA

UNITED NATIONS, Mar 28 2013 (IPS) - Viktor Bout earned a few monikers in his heyday: “Merchant of Death”, “Sanctions Buster” and “Lord of War”. He’s the poster boy for illicit arms brokers – a guild of shadowy intermediaries who link arms suppliers to their end users.

While Bout sits in a jail in the southern U.S. state of Illinois, U.N. member states are concluding an Arms Trade Treaty (ATT) – an international agreement that hopes to control a trillion-dollar industry and curtail the use of arms for human rights violations.

They justify in the most compelling ways that what they do is actually good for the world, using phrases like ‘in defence of humanity’ and ‘arming people to keep the peace’.

But “arms brokering” in general was hardly brought up during ATT negotiations at U.N. headquarters, from Mar. 18-28, even though Bout’s like-minded successors and contemporaries – many of who fuel the abuse of arms – remain at large.

“Governments around the world depend on brokers to carry out their national security operations,” she told IPS, pointing out that brokers are the main facilitators of any arms trade.

“If you talk about including these actors (in the ATT), and if you talk about bringing stronger control, then you open a can of worms and put a lot of governments on the spot,” said Austin, who’s own efforts led to Bout’s capture.

The reason brokering was not discussed, suspected Austin, was that governments made up their minds about brokering before ATT negotiations even began.

“Had there more time for (member states) to better understand the role of brokers and transporters, than you might have seen a stronger lobby for brokering,” she said.

“I just think we ran out of time (to convince them),” she added.

Brian Wood, head of arms control at Amnesty International, told IPS that there is an absence of national and international regulations surrounding brokering. Over two-thirds of U.N. member states lack national laws regulating the activity.

They are currently involved in arming people in Iran, Syria, the Democratic Republic of the Congo and Sudan, said Austin.

“He is very smart, and knows how to build shell companies and front companies that obscure what his transactions are. He puts a lot of businesses in his wife’s name, for example. He is like Viktor Bout in that he uses other actors in the network to kind of be the front, so he continues to be in the shadows,” she added.

“Andrei on the other hand is a fairly charismatic, almost kind of bumbling type of arms trafficker,” said Austin, who said she met with him in Mauritius, at a tourist’s hotel and restaurant that he used to conduct his business.

“He’s a great vodka drinker and a great smoker. The (place) was right on the beach. That’s the kind of place Andrei likes to hang out in,” she said.

Austin said that the latter arms dealer was telling her about the atrocities he perpetuated with Bout, and “he was having a mea culpa moment about his businesses.”

However, “there is this kind of carefree attitude that for them this is a business and they’re making money, and if others are involved in killing each other in the Congo, that’s none of his business,” she said.

“A lot of governments and law enforcement officials believed that if you ‘cut off the head’ of Viktor Bout’s arms trading network, it would crumble,” she said.

“(But) the actors in those networks have continued to do business. They now see it in their advantage to no longer create this superstructure empire, but to fly their business in smaller mom and pop style – so it actually made them stronger,” she added.

The final ATT itself contains only one small paragraph on brokering, which starts, “Each State Party shall take measures, pursuant to its national laws, to regulate brokering under its jurisdiction.”

Wood noted the significance of the phrase “pursuant to its national laws”. He said, “If two-thirds of countries don’t have (national) laws regulating brokering, then (by definition) the activity is not going to be illicit.”

Many governments and corporations are largely intertwined with arms brokers, using them as intermediaries to pay bribes and conduct other shadowy activities, he explained.

“Virtually every individual broker who is engaged in massive illegal arms trading activity are at one time or another being accessed by one or more intelligence agencies in the world,” he said.

Feinstein noted that such collusions might have played out during ATT negotiations.

“Defence companies, defence contractors and the defence sector are enormously powerful,” he said. “The ways their voices are heard are through the power they wield over governments.”

“These industries have incredibly close relationships with governments… They have an access to government which is quite unique,” said Feinstein, who served as a member of parliament for the African National Congress (ANC) in South Africa.

He also noted the U.K.’s position in the ATT talks. “The U.K. has been positive about some of the (strong ATT) measures imposed, but the way in which the U.K. engages in the trade is that they use a huge number of intermediaries from the world for the illicit trade,” he said.

“I think the U.K. is supporting transparency measures with the knowledge that the really big players (U.S., Russia and China) are going to put it back, and I don’t think they’re actually going to be that disappointed with it,” he added.

Feinstein warned that if the final ATT is too watered down, it might be worse than not having a treaty at all.

“It (would) effectively provide a stamp of approval for the status quo as it currently functions, a status quo that only intensifies conflict… and most ironically make the world a more dangerous place,” he said.

Who are the arms brokers?

Wood of Amnesty International told IPS, “The top arms brokers are what I call professors of the arms trade.

“They work systematically. They have a breadth of technical and legal knowledge. They have commercial acumen. They know the right people, and they’ll offer a ‘one-stop-shop’ type of service,” he said.

However, few people have a clear view of the arms brokering network. “No one has a list of arms brokers, because the governments don’t control them… We (only) get a snapshot of what’s happening,” said Wood.

The most “nefarious” brokers are the ones who are corrupt and who work to circumvent U.N. arms embargos, he added.

Feinstein, who spoke with an arms dealer as recently as last week, told IPS, “They have certain common characteristics. The first that strikes me about all of them is that they’re all these absolutely charming, larger than life, charismatic characters.”

Another characteristic, said Feinstein, is that “to a sociopathic extent”, these brokers are unable to comprehend the effects of their actions.

“They justify in the most compelling ways that what they do is actually good for the world, using phrases like ‘in defence of humanity’ and ‘arming people to keep the peace’,” he said.

“They’re unable to see the other side of what they do, the real human consequences of the ways they make huge amounts of money,” he added.

Brokering in the future

“There’s loads of submarkets for different things, thousands of products… this is tens of thousands of items being traded every day,” said Wood.

“The arms market themselves have become more differentiated,” he explained. “A lot of the stuff that’s traded are parts or components, so they’re not the finished systems.

“You have a lot of people who specialise in particular kinds of equipment. It’s a niche market,” he added.

“If they are not regulated… people may wake up and realise that brokers have taken them for a ride,” he warned.