BOOKS: In the Shadow World, Only Blood, Gold and Gunpowder

WASHINGTON, Feb 9 2012 (IPS) - They called themselves the “cut hands commandos” because they lopped off their victims’ hands with machetes; the “burn house unit”, for the thousands of families who were locked into their homes and roasted alive; the “born naked squad”, in reference to the hapless hundreds who were stripped naked and raped before being bludgeoned or burned to death. 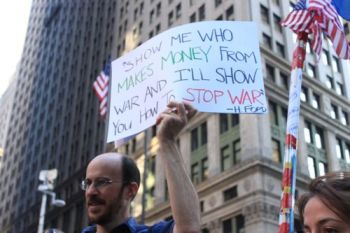 A Nov. 8, 2011 rally at Occupy Wall Street where Feinstein spoke about his book. Credit: controlarms/CC-BY-2.0

The perpetrators were not savages operating alone in Freetown, Sierra Leone’s capital, during the two-day horror that marked the climax of that country’s 11-year civil war in January 1999.

Rather, Andrew Feinstein writes in his new book “The Shadow World: Inside the Global Arms Trade”, the swarms of men – most of them teenagers driven to madness from forcible injections of crack cocaine into their heads – were a machine oiled by the dollars of some of the world’s biggest arms traders, who handed the rebels caches of weapons in exchange for unfettered access to the timber fields and diamond mines of West Africa.

Those same weapons – carried into Liberia and passed across the porous border into warring Sierra Leone aboard a British Aircraft Corporation (BAC) 1-11 jet owned by the notorious Ukrainian-born Israeli arms dealer Leonid Minin – were used to murder 6,000 civilians, maim and mutilate tens of thousands more and send 100,000 fleeing for their lives.

Industrial giants such as the notorious Merex – an arms company with links to the Nazi regime – as well as a plethora of others including Lockheed Martin, Boeing, Northrop Grumman and affiliates like KBR, Halliburton and Blackwater, are hauled into the limelight; but a quick look at the history of corruption meeting justice erases hopes that even blatant public exposure can halt the industry.

Since the U.N. established its official arms embargo in 1999, just 502 violations have been brought to light. Of these, just one has led to legal accountability in a case that ended in an acquittal.

As long as governments are chained to those who profit incomparably from revenues of one death parade after another, it is impossible to imagine the particularly heinous violence that has come to define the 21st century abating anytime soon.

"In the U.S., the military- industrial-congressional complex has such a hold on the state, and is such a systemically important component of the capitalist economy that to delink it is extremely difficult," said Feinstein.

"A crucial dimension of this process is informing taxpayers and voters about what is being done in their name and with their money: not only the perpetuation of the illegal trade in arms but also the squandering of billions of dollars for the benefit of a tiny elite, which spending also undermines 'national security' rather than bolsters it as claimed."

Such exchanges – of lives for “business as usual” – are the subjects of “Shadow World”, the first account of its kind to chronicle the corruption, collateral damage and protagonists involved in the world’s most lucrative business.

Feinstein writes, “Global military expenditure is estimated to have totaled 1.6 trillion dollars in 2010, 235 dollars for every single person on the planet. This is an increase of 53 percent since 2000 and accounts for 2.6 percent of global GDP.

“The trade in conventional arms, both big and small, is worth about 60 billion dollars a year,” he notes.

The U.S.’s national security budget alone reaches a trillion dollars a year, with a defence portfolio topping 703 billion annually, but it is by no means the only, or even the worst actor in the war economy. China, Russia, the United Kingdom, Germany, Sweden, Holland, Italy, Israel and China are also formidable players in the arms game.

Citing statistics from the U.S. department of commerce, Feinstein reckons that the global arms trade accounts for almost half – 40 percent – of total corruption in world trade.

Rarely occurring out in the open, Feinstein posits that arms deals occupy a shadow land, midway between legal but opaque “grey” transactions and the utterly lawless black market.

Here, “buyer” and “seller” are fluid terms, and could refer to anyone from government agents and gunrunners to pariah states and private detectives to guerilla fighters and corporate CEOs.

He writes, “From world wars to the Cold War to the War on Terror… arms dealers, weapons manufacturers and governments have fuelled and perpetuated tensions in pursuit of profit, on occasion selling to all sides in the same conflict.”

China and Russia provide much of the firepower needed to maintain dictatorships and regimes of terror in Syria, Burma, Sudan, North Korea, Zimbabwe and Sri Lanka, watching impassively as weapons large and small lay waste to whole neighbourhoods, villages and cities from “Darfur to Mallaitivu”.

When Egypt’s Hosni Mubarak finally fell from power, China, Russia, the UK, the U.S. and France slipped slowly into the shadows, offering token denunciations of the regime while stuffing away the bank slips documenting their years-long arms deals with Egypt.

And when NATO flew its sorties over Gaddafi’s incendiary Libya last year, the righteous warplanes were on the lookout for weapons bearing the names of Russian, French, German and Italian arms manufacturers: in effect spending millions to eradicate arms provided by its own member states.

The book traces the "unholy alliance" between governments and the arms industry, noting, "Nowhere is this more apparent than in the U.S…. The pervasive, largely unchallenged common interest of defence manufacturers, the Pentagon intelligence agencies, and members of Congress and the executive suggest that the U.S. is effectively a national security state."

Though he is no stranger to shocking facts and figures, Feinstein admits to being "surprised by the extraordinary lack of meaningful checks and balances in the U.S. domestic weapons procurement system."

"For instance," he told IPS, "the Pentagon has not been audited for over two decades and says it will miss an imposed deadline of 2014, but hopes to be audit ready by 2017."

The UK is similarly bound to a fraternity between manufacturers like BAE Systems and the government's executive arm.

In fact, writes Feinstein, BAE was party to the largest arms sale – known as the Al Yamamah, meaning "the dove" in Arabic – the world has ever seen, in which the government of Margaret Thatcher agreed to provide Saudi Arabia with a plethora of military hardware in exchange for 400,000 barrels of crude "black gold" per day.

In France, parts of the weapons industry are still in state hands, while German, Swedish and Italian companies also receive massive assistance from their governments, which provides a bulletproof chamber of impunity against investigation or prosecution.

In Italy and Sweden, where the Swedish aerospace and defense giant Saab works hand in glove with BAE, investigations into corruption are virtually non-existent.

"The role of weapons business is a crucial component of the People's Liberation Army's vast and commercial empire, which has become a defining feature of China's autocratic command capitalism," Feinstein added.


From these double-dealings arise the kind of silence and secrecy that are almost impossible to breach.

“Well over 80 percent of the people I approached wouldn’t speak to me, or didn’t even answer requests,” Feinstein told IPS.

“When I first emailed Joe der Hovsepian (the notorious Armenian- Lebanese weapons titan who had never given an interview prior to his talk with Feinstein), he responded along the lines of, ‘In my long life I’ve never done anything for nothing. Why should I start now?'”

Feinstein also hounded the World Trade Organisation about why its “defence is the one sector in which economic offsets are allowed to be used in public procurement decisions.” He is still waiting for an answer.

Feinstein’s dogged pursuit of the trail of bloody footsteps and smoking gun-barrels across the killing fields and into government offices or corporate boardrooms arose not only from an urge to expose the corruption that makes the world more vulnerable to inexorable warfare.

He also sought to expose how the torrent of money expended on bloodletting represents a massive diversion of public funds that could, instead of gushing into the off-shore bank accounts of a handful of profiteers, build solid health, educational and social infrastructure to provide the “stability and security” that warmongers claim to bankroll.

As a former member of the African National Congress (ANC), the author was first awakened to the opportunity cost of the shadow world when he discovered that the newly-elected government of post-apartheid South Africa spent close to 10 billion dollars on arms and weapons in its early years in power, even while lamenting vociferously its lack of funds to provide antiretroviral drugs to the country’s six million HIV-positive citizens.

Half a decade later, while the freshly acquired war machinery grew rusty in warehouses, 355,000 South Africans had died preventable deaths.