MÁLAGA, Spain , Oct 15 2012 (IPS) - At the height of the economic and financial crisis, the Spanish government is promoting the export of weapons, creating concern among civil society organisations that say commercial interests are prevailing over the law and human rights.

“At a time when commercial considerations are more prominent than regulations, arms are being sold to countries where human rights are violated and global conflicts are nurtured,” said Jesús Núñez, the co-director of the Institute of Studies on Conflicts and Humanitarian Action (IECAH).

Spanish law on foreign arms trade specifies that sales are not permitted when there is reason to believe that the weapons may be used in actions that disturb the peace, security and human rights in destination countries.

Núñez, an economist and retired military officer, told IPS this law “is not observed” because the economic interests of the government of the day prevail, especially since the Defence Ministry has had its budget for 2013 reduced by six percent compared to 2012, and is in debt to the tune of billions of dollars. 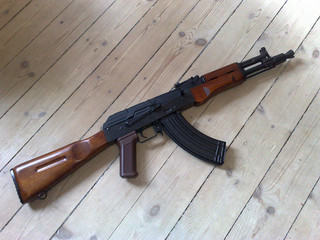 Weapons exports are flourishing in Spain. Carsten Lorentzen/CC BY 2.0

Over half the sales were destined to Venezuela, followed by Australia, Norway, and to a lesser extent Colombia, Israel, Morocco and Pakistan, among others, according to the report “Spanish Statistics on the Export of Defence Material, Other Material and Dual Use Items and Technologies” by the Ministry of Industry, Tourism and Commerce.

“There’s a clear relation between the rise in arms sales and the increase in conflicts in the world,” Jordi Garrell, head of the Catalan Peace Association and coordinator of the campaign “Hidden Businesses”, promoted by Catalan social movements to denounce military security and armament build-up between Spain and Israel, told IPS.

“Operations that cannot be justified under Spanish law have been carried out, involving defence products reaching destinations where there is a risk that they will be used to commit or facilitate serious violations of human rights,” says a report issued by IECAH.

The report contains figures for sales of military equipment to Egypt, Bahrein and Saudi Arabia during the so-called Arab Spring, when popular uprisings in many places were violently repressed or gave rise to armed internal conflicts.

In fact, Carlos Villán, the president of the Spanish Society for International Human Rights Law (AEDIDH), complained to IPS that the European Union did not establish “a real control mechanism” to make member states respect the ban on exporting “military technology and equipment” to countries with civil wars or where rights are violated.

In a Sept. 30 televised interview, former Spanish defence minister Eduardo Serra said he would not approve of sales of arms and defence material to a country if there was a risk of contributing to human rights violations. But he also said that to get things done, it was necessary to get one’s hands dirty.

Villán criticised the government’s lack of transparency on this issue because in Spain, already in sixth place for the volume of its arms exports in the world, civil society “cannot exercise effective control over sales by companies supported by the ministries of defence, foreign affairs and cooperation.”

Citizens do not have access to the information because sessions to regulate the government in parliament “are secret,” he said.

“This absurdly large sum of money only benefits arms traders and exporters,” said Villán, who said this “clearly immoral” trade prospered because of the lack of international regulation.

In Villán’s view, the main arms exporting countries, headed by the United States, caused the negotiations to fail, and the arms trade continues to feed the 40 armed conflicts ongoing in the world today.

Resources that states devote to purchasing arms “are to the detriment of the economic and social development of their people,” he said.

U.S. President Barack Obama “did not cooperate to come up with a treaty,” Núñez said.

“The idea is not to ban the arms trade,” said Núñez, but there is evidently “a lack of political will” to reach an international agreement on the issue, because “governments prefer to have carte blanche.”

China, France, Germany, Russia, the United Kingdom and the United States supply around three-quarters of the world’s weapons, according to human rights watchdog Amnesty International’s web site. Of these countries, only Germany is not a member of the U.N. Security Council.