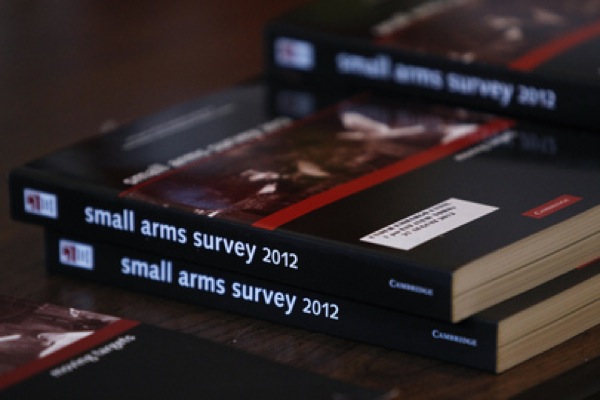 According to the 2012 Small Arms Survey, as much as 8.5 billion dollars is spent every year on the legal trade of small arms and light weapons. Credit: UN Photo/JC McIlwaine

UNITED NATIONS, Aug 28 2012 (IPS) - The goal of curbing small arms proliferation appears more elusive than ever, according to a report released this morning by the independent research project Small Arms Survey.

As much as 8.5 billion dollars is spent every year on authorised international transfers of small arms and light weapons, more than twice the previous estimate of 2006, according to Small Arms Survey’s annual flagship publication, the 2012 edition of which is titled “Moving Targets”. The project, based in Geneva, has been investigating small arms and light weapons across the world for more than 13 years.

Small Arms and Light Weapons (SALW), which range from handguns to landmines or hand grenades, cause many deaths and injuries across the world. The United Nations (U.N.) has been trying to reduce SALW trade for years.

“The casualties include children, the stability of entire societies, and public confidence in institutions,” Ban added.

The Small Arms Survey’s new report was released on the first day of the second review conference of the U.N. Programme of Action (PoA), at U.N. headquarters in New York.

U.N. member states agreed upon the PoA in 2001 with the goal of reducing the “human suffering caused by the illicit trade in small arms and light weapons” through “the promotion of a culture of peace”.

Yet more than a decade after the signing of the programme, the findings of the Small Arms Survey show that the PoA still has much to achieve.

The long-awaited Arms Trade Treaty (ATT), which fell short of being ratified a few weeks ago at U.N. headquarters, could have been a major actor in reducing the trade in SALW. But the ATT negotiations did not reach an agreement, with countries opting for further talks and a possible General Assembly vote in October.

“(The ATT) is an ambitious undertaking and we will continue to watch it. It’s not yet a success, but we would not define it as a failure either,” Eric Berman, the managing director of Small Arms Survey, told IPS.

According to researchers, expansion in small arms trade is caused by both civilians and governments, with U.S. citizens spending more on small arms than ever and a concentrated handful of governments purchasing arms on a larger scale, mainly for armed forces involved in fighting in Iraq and Afghanistan.

“Recreational hunters and other private individuals buy millions of imported rifles, shotguns and rounds of ammunition each year,” the survey said.

The 367-page long volume also presented a list of the main importers and exporters of SALW, with the United States topping both categories.

Despite the survey’s length, however, gathering data on SALW is no easy task, and the Small Arms Survey must deal with the overall lack of transparency of governments. The report pointed out that “in the past ten years, 29 countries published a national arms export report at least once; 25 of them are European states.” Of the non-European states, “only Australia, Canada, South Africa, and the U.S. have published national arms export reports.”

To address this problem, the Small Arms Survey’s experts created a transparency barometer, enabling them to evaluate each country’s willingness to share information.

“We’re still at a very low number, but the trend is upwards,” Berman told IPS. “The major exporters are improving their reporting and their data provision, and I’m optimistic that we’ll continue to gain greater bind from governments to share information,” he added.

The Small Arms Survey’s yearbook is then to be used as a resource for many, including governments and policy-makers. “It is usual for countries to use our data,” Small Arms Survey’s research director Anna Alvazzi del Frate told IPS. “It’s an instrument that helps them.”

The extensive volume broaches many topics, such as illicit small arms in war zones, Somali piracy, drug violence, guns in Latin America and the Caribbean, non-lethal firearm violence, Kazakhstan or the rise in private security companies, which all highlight the toll taken by SALW and the need to limit their number.

Despite the sheer volume of research and data collected by Small Arms Survey, however, much is left to be done to reduce SALW trade. The U.N. has made doing so a top priority, with Ban calling for an end to “the big problems caused by small arms”. With the recent failure in negotiations at the U.N. in July, however, perhaps the only certainty in the effort to curtail SALW trade is that significant challenges remain.