NEW YORK, Jun 12 2012 (IPS) - On the eve of the Rio+20 Summit in Brazil, the U.S.-based Natural Resources Defense Council (NRDC) released a report Monday ranking the world’s biggest countries on their use of renewable energy.

It shows the European Union’s clear leadership in the field, but also the significant progress made by developing countries. 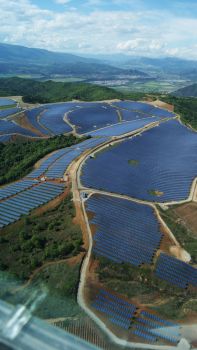 The last time that world leaders met to discuss sustainable development was at the Rio+10 Earth Summit in Johannesburg a decade ago. Since then, significant changes have been made in terms of renewable energy.

“We decided to look at the progress made since 2002 and check how countries were doing,” said Jake Schmidt, international climate programme director for NRDC, a nonprofit environmental organisation.

The report shows that the world’s biggest countries have taken some steps towards a more sustainable world.

“Since 2004, new clean-energy investment in the G20 countries has grown by almost 600 percent,” the report says, but there is still much work to be done, as renewable energy only accounts for 2.6 percent of the overall energy for the G20 as a whole.

European countries get more of their electricity from wind, solar, geothermal, tidal and wave power than any other region in the world. Germany is leading the way in green energy, followed by the EU as a group and Italy, according to the NRDC.

The NRDC scorecard also shows clear gaps in terms of renewable energy among the countries of the G20. Indeed, while a substantial 10.7 percent of Germany’s energy comes from clean sources, only 2.7 percent of the United States’ energy does, and some of the world’s biggest countries such as Russia are still investing very little in renewable energy.

Some developing countries, while still playing a minor role in green energy, are increasingly investing in clean sources. China, Brazil and Turkey are leading the way for developing nations, with China showing a staggering 7,605 percent increase in clean energy investments since 2002, according to the report.

“You see a diverse list of countries with South Africa, India, China, Indonesia and a lot of others playing key roles as well as the traditional G20,” said Dan Kammen, a professor in the Energy and Resources Group at the University of California, Berkeley.

Although the results show some significant progress coming from a range of countries, it is far from enough. Under current trends, the amount of energy produced from renewable sources throughout the world should increase from about two to seven percent by 2020, a number that has to be doubled, according to the report.

As countries are focusing on Rio, they are working on long-term targets, which are critical but not essential, according to Schmidt.

“What we really need at Rio is a set of targeted short-term commitments from individual countries, companies, cities, to really scale up renewable energy,” he said.

“It is more important that key actors come to Rio+20 with individual country commitments to increase the amount of renewable energy to 15 percent of total electricity by 2020,” he added.

Urgent actions are also needed to elimiate Environmentally Harmful Subsidies (EHS), through which polluting energies are funded, according to Kammen.

“While the overall investment in renewables, estimated to have been around 160 billion dollars last year, is very impressive, we must also keep in mind that the the global subsidies are estimated to be around 400 to 500 billion dollars… and that’s just for fossil fuels,” he said. “The landscape is truly far from level.”

“That’s not just a threat to the thousands of new jobs being created by the renewable energy industry, but also a threat to our health, our environment and our planet,” Schmidt added.

In order to achieve these short-term goals, the cooperation between countries must increase, according to NRDC’s experts.

“There’s always a lot of collaboration around renewable electricity, in terms of helping countries overcome technology barriers, or cost barriers, and we need to take that to the next level. We need to step up the efforts to work together,” Schmidt said.

The benefits would be substantial. “There is a very diverse set of benefits, some local benefits ranging from improvement in the local air quality, local water quality, to diversifying the energy mix and of course global benefits as well,” Kammen said.

But for these benefits to become a reality, the progress made needs to be tracked overtime and regulary published in scorecards.

“We need to make sure that commitments are followed through. We need to hold them (governments) accountable for the progress, or lack of progress,” Schmidt warned.

The Jun. 20-22 summit in Rio is widely viewed as a once-in-a-lifetime chance to gather world leaders, participants from governments, the private sector, NGOs and other groups to discuss renewable energy, one of the top priorities of the conference.

But the outcome of Rio+20 will mainly depend on the involvement of the participating states, and only six out of the G20 countries have already confirmed that their leaders would attend the meeting.

“The G20 countries are not essential, but they are major economies around the world, so whether or not their head of government comes and makes a commitment would be a marker of the success at Rio,” Schmidt explained. “It is a clear signal of the will of these countries to put the world on a more sustainable growth.”

“There’s still a lot of work to be done but the progress is quite impressive,” Kammen concluded. “The challenge is to move along.”