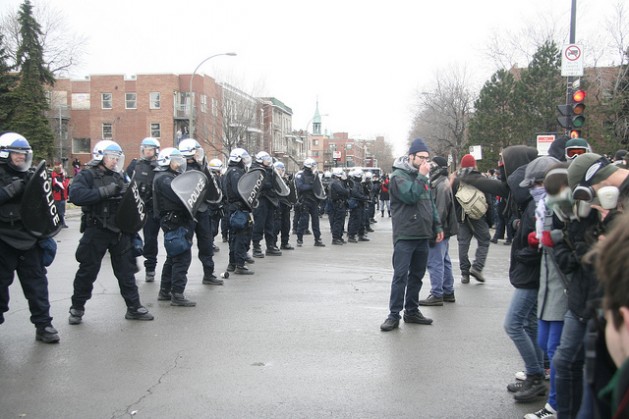 UNITED NATIONS, Jun 8 2012 (IPS) - The student movement that erupted in February following the announcement of a 75-percent rise in university tuition fees is now becoming a violent struggle for democracy in Quebec.

“I felt betrayed by the government. I felt like it was the end of democracy,” said Martha Stomal, a student at Université de Montréal, proudly wearing a red square pinned on her shirt – first a symbol of the student protest against the tuition hike, and now a condemnation of the provincial government.

“When I forget to wear my red square, I feel like there’s something missing,” the young woman told IPS.

In a move to raise funds for its universities, the Quebec government announced at the beginning of 2012 that there would be a 75-percent rise in tuition fees over the next five years. Needless to say, the news angered a majority of students who started protesting, supported by many teachers.

Their action has now become the longest-running and biggest student strike in Canadian history.

“I haven’t had any classes for three months,” Stomal told IPS.

The new education “reform” policy, designed to solve the problem of supposedly underfunded universities, was seen by many as abusive and unnecessary.

“The government ended up convincing itself that it was simply at the head of a big company. Big mistake there,” Christian Nadeau, a professor of political philosophy at Université de Montréal and the creator of one of the movement’s famous video clips, told IPS.

Not everyone agrees. Kristine Larivière, a student at Université Laval, approves of the five-year plan. “Everybody wants the best education possible, top-notch technology, prestigious teachers, etc. That has a cost, as everything else does in life,” Larivière told IPS.

The underlying debate is over how the budget is being spent. “I don’t think that there really is a problem of underfunding, as the government states it. Rather, we are facing a problem of bad allocation of the money available … I am convinced that a free education system could be sustainable in Quebec,” Sylvie-Anne Boutin-Panneton, vice-president of the Montreal-based student association Aellfum, told IPS.

But what really angered the Quebecois and attracted the attention of international observers was the government’s response to the peaceful student uprising: violent repression by anti-riot police, and the implementation of a new law, the controversial Bill No.78, which levies stiff financial penalties up to 125,000 dollars per student and outlaws many protests in what many view as an authoritarian bid by the government to quash dissent.

As a result, what started as a student movement soon became a popular struggle against draconian policies implemented by the provincial government, including environmental, economic and labour issues.

The protestors’ motto can be seen during demonstrations that sometimes surpass 40,000 people: “If the strike is a student one, the struggle is a popular one.”

“I think people realised that there is another society possible, and that they have the power to change it,” Stomal said. “We are not only fighting against the rise of tuition fees, but also for a democracy that prioritises our rights and not the capitalistic interests of our government.”

Critics of the government’s reaction to the protests have widened beyond the student body to include teachers, lawyers, U.N. officials and NGOs such as Amnesty International, which charged that Bill 78 violates fundamental rights.

Hervé Philippe, a teacher and researcher at Université de Montréal, published an open letter to Prime Minister Jean Charest: “Mister Prime Minister, how can I accept to see such an infringement of the basic principles of democracy by a government supposed to work towards the development of democracy?”

Even the Russian government of Vladimir Putin criticised the new law and expressed concern over the violence of the police force towards students, including hundreds of arrests.

The police repression has indeed been harsh. “Every time, there are people who get injured… The other day, we heard a huge blast. We could smell tear gas and people started running away. We then realised that the police had thrown a flash-bang grenade. We tried to go away, but the police were blocking every exit and they pepper-sprayed everyone,” Stomal told IPS.

“Police brutality is unfair and can only make things worse,” added Boutin-Panneton.

These incidents are documented in numerous videos posted online, but no actions have yet been taken by the government to stop escalation of the violence.

“Police violence has gone crazy, but nothing is being done to prevent it. Citizens will have trouble trusting institutions such as the government and police for many years,” Nadeau said.

“I think the government just proved that it didn’t deserve to rule anymore,” said Boutin-Panneton.

For now, the students and the government haven’t been able to establish a dialogue, and seem to have reached a deadlock that could jeopardise democracy in Quebec.