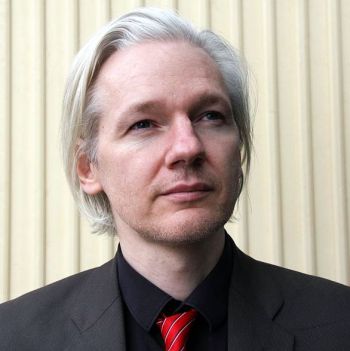 But with Sweden and the United States pursuing him for potential criminal charges, Assange is unlikely to make his way out of the U.K., which has threatened to break in to the embassy to arrest him.

Assange has been avoiding extradition to Sweden for months, where he is to be questioned over sex assault claims, a mere “attempt to get (him) into a jurisdiction which will then make it easier to extradite (him) to the U.S.,” he told the Sun in December.

The Ecuadorean government said that the decision was taken after the UK, Sweden and the U.S. refused to guarantee that once extradited to Sweden, Assange would not be sent to Washington to face additional charges.

The three countries “would not provide any guarantees that he would not be sent to the U.S. to be tried for political crimes,” Mark Weisbrot of the Center for Economic and Policy Research (CEPR) told IPS.

“So (Ecuador) had no choice under international law but to grant him asylum,” Weisbrot said.

“We believe (Assange’s) fears are legitimate and that he could face political persecution if the measures are not taken,” Ricardo Patino, Ecuador’s minister of foreign affairs, said Thursday at a press conference in Quito.

The famous hacker, once called a “hi-tech terrorist” by the Barack Obama administration, fears that he would then face other charges for having leaked top-secret information, including 400,000 documents about the Iraq war and U.S. torture of detainees.

He has thus far found refuge in the premises of the Ecuadorean embassy in London, where he has been sleeping on an air mattress since June. If he sets foot outside of the building, he will be arrested by the British police, sent to Sweden, and possibly the United States.

Thursday, applause from many of Assange’s supporters could be heard outside of the embassy as news came that Ecuador had granted diplomatic asylum to their Australian refugee.

“I am grateful to the Ecuadorean people, President Rafael Correa and his government. It was not Britain or my home country, Australia, that stood up to protect me from persecution, but a courageous, independent Latin American nation,” Assange wrote on WikiLeaks before posting “Gracias a Ecuador y ustedes” (Thanks to Ecuador and to you) on his Twitter.

If extradited to Washington, the famous whistleblower would likely face heavy charges.

“Assange would risk the severest penalties – life imprisonment or even the death penalty – if he were tried in the U.S.,” Reporters Without Borders’ Delphine Halgand told IPS.

“The resources deployed by the U.S. authorities to track down WikiLeaks activists and supporters and obtain their personal data can only reinforce these concerns,” she said.

But while the announcement of asylum came as good news for Assange and his numerous supporters, it did not change his situation in any way, with the U.K. police now surrounding the embassy in a “menacing show of force”, according to WikiLeaks.

Should Assange attempt to leave his safe haven, he would be arrested before reaching the airport.

“We will not allow Mr. Assange safe passage out of the U.K., nor is there any legal basis for us to do so,” the British foreign secretary said in a statement released Thursday.

“The U.K. does not accept the principle of diplomatic asylum,” the statement read.

London had previously threatened to enter the Ecuadorean embassy to arrest Assange. However, such a move would blatantly infringe on the inviolability of diplomatic premises as defined under the Vienna Convention, according to Michael Ratner, a legal adviser to WikiLeaks.

“The fact that the British – and I was as shocked as anybody – said yesterday that they might invade the embassy to get their hands on Julian Assange is an incredible violation of international law that is unheard of,” he told Democracy Now.

“I mean, think about the Chinese going into the U.S. embassy to get Chen out in China… This is unheard of in law, it’s unheard of in diplomacy, and it’s an outrageous and egregious undermining of the right of a country to give asylum,” Ratner added.

Other legal experts doubt the UK would actually follow through on such threats.

“(The UK) mentioned revoking diplomatic status for the embassy… Too legally risky in my view,” Carl Gardner, a former lawyer for the British government, told IPS.

If he still refuses to surrender, Assange has two options – holing up in his hideout or trying to reach an airport via an embassy vehicle, which would very likely lead to his arrest.

“I’d be tempted to advise him to go to Sweden and defend himself if there’s a trial. I think that’s inevitable in the end. I don’t think I could offer him any hope of a way out,” Gardner told IPS.

But Gardner adds, wryly, that there’s yet another possibility: “Ecuador could name Assange its representative to the United Nations. That would make him immune from arrest while traveling to U.N. meetings around the world.”