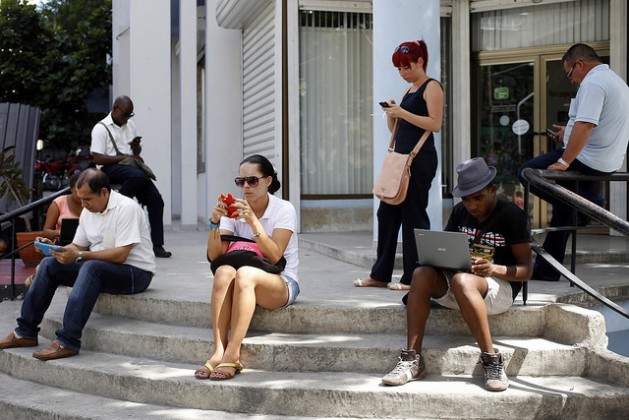 A group of people outside the medical library in the central Havana neighourhood of El Vedado, where Wi-Fi connection is now available. It is one of the 35 hotspots opened by the government telecoms monopoly around the country. Credit: Jorge Luis Baños/IPS

HAVANA, Sep 9 2015 (IPS) - Young people in Cuba are anxiously awaiting an acceleration of the informatisation of society, which is apparently moving ahead at the same pace as the current reform process, “without haste, but without pause,” according to the authorities.

“Where I would really like to have Internet is at home,” Beatriz Seijas told IPS, sitting in the entrance to a building on Avenida 23, a street in downtown Havana better known as La Rampa, where the state telecoms monopoly ETECSA opened one of the 35 new Wi-Fi access points around the country in July.

Seijas said she came to try the connection here, for two dollars an hour. “As a Cuban, I had never connected to the Internet by telephone or tablet,” said the 19-year-old university student.

“Connecting to the Internet is just a normal thing to do,” said the young woman, who despite the technological and connectivity problems in this Caribbean island nation, sees the new information and communication technologies (ICTs) as a natural part of life, like many of her peers around the world.

Today six out of seven people across the globe have a cell phone and more than 3.0 billion of the world’s 7.1 billion people use the Internet, according to the United Nations, although there is a large gap in ICT access – another reflection of global poverty and inequality.

Digital natives is a term used to refer to people born after 1980, who had access to computers, video games, the Internet, and mobile phones from a young age.

Young people, who represent 26 percent of Cuba’s 11.2 million people, are the main voices calling for greater openness to ICTs. 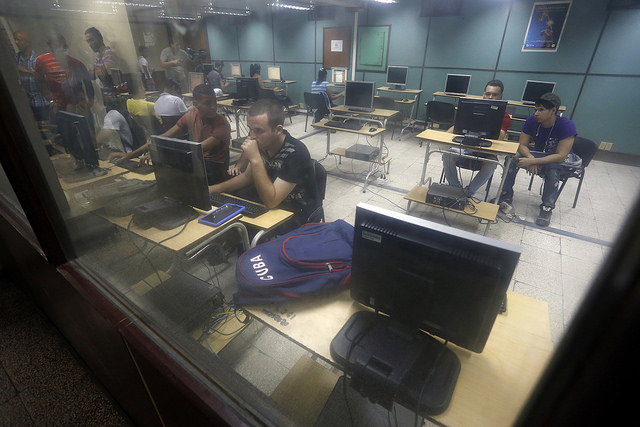 Internet parlour at the University of Camagüey in eastern Cuba, where the first social network developed entirely in this country, Dreamcatchers, was born. Credit: Jorge Luis Baños/IPS

The U.N. agency estimated that only 3.4 percent of Cuban households had private but state-regulated Internet connections in 2013, most of them via dial-up modems and a small proportion through DSL service, which is limited to certain professions, such as journalists and artists.

In June, ETECSA reported that there were more than three million cell phones in the country.

In 2013, Cuba’s national statistics office ONEI registered 2,923,000 users of the Internet and the country’s state-controlled intranet, where a limited number of international and local sites can be accessed.

For decades, Cuba cited financial problems as well as the U.S. embargo to explain the limited availability of Internet in this socialist nation.

But things should change with the thaw between the two countries, which led to the reopening of embassies on Jul. 20.

Other U.S. companies that have presented proposals to the government of Raúl Castro are Netflix, Apple, Amazon and Airbnb. In addition, IDT reached an agreement with ETECSA in February to offer direct telephone services between the two countries.

In a Jul. 6 online forum in the local media, the Communist Youth Union stated that “more than 60 percent of the people online in Cuba are young people,” without specifying whether they were referring to the Internet or the intranet.

“The prices are not affordable, but people make the effort. I’ve seen that demand outstrips offer,” said Seijas, who uses her allowance to surf the web for fun.

In 2013 Cuba expanded connectivity, opening 118 public Internet cafés, but at a cost that was unaffordable to the average Cuban: between 4.50 and 6.00 dollars an hour.

Until then the Internet was available only in certain government institutions, schools and Young Computer Club community centres, as well as to tourists in hotels.

In 2014, mobile phone email service was made available.

The 35 Wi-Fi hotspots created by ETECSA are on sidewalks and in parks in 16 cities around the island, and up to 50 or 100 users can log on simultaneously at a speed of one megabit a second.

But although the price of surfing the net for one hour at the 35 public spaces with Wi-Fi is two dollars, down from 4.50 in the state-owned Internet parlours, that is still prohibitive in a country where over five million people earn a public sector salary averaging 23 dollars a month.

The demand is driven by a segment of the population who are earning more in the growing number of private businesses, receive remittances from family members abroad, or have better-paid jobs in foreign companies.

It is also fuelled by people’s hunger for new things or the search for higher speed Internet.

Although they can log on at the University of Camagüey, a young professor, José Carlos Hernández, and students Merín Machado and Dany Avilés told IPS that they sometimes pay the 4.50 dollars an hour rate at the cybercafé in the city of Camagüey, 578 km east of Havana.

The team maintains the social network Dreamcatchers, which emerged in 2012 as the first one totally developed by young Cubans – computer science students and professors from the University of Camagüey. The network, which now has 15,000 users, “bolsters research and development in the university community,” explained the 21-year-old Avilés.

Also available over Cuba’s intranet, Dreamcatchers promotes itself as a collaborative social network based on ideas, which brings together “like-minded people,” the computer science student said. It offers a messaging and chat platform and a page for sharing ideas.

The three young people said they were sure there would soon be more Internet access in Cuba which, they stressed, would be a very positive thing for their project.

The socialist government faces the commitment to reach the International Telecommunications Union’s target of 50 percent household Internet coverage and 60 percent cell-phone coverage by 2020 in developing countries.

To meet this and other international goals, early this year the authorities launched a plan to expand computer use in Cuban society and boost the social use of the web in sectors like health, education and science, increase access in public site like cyber salons and parks, and lastly provide access at home.

The programme’s aims include: developing the country’s fixed and mobile telecoms infrastructure, using Wi-Fi and optic fibre to bring in broadband, reducing Internet costs, and fostering e-commerce and the computer industry.

Authorities in Cuba, which has been caught in the grip of economic crisis for over 20 years, have not specified the funds to be allotted to the plan. But they did say it was backed by China and Russia.

The ICT sector does not form part of the package of business opportunities presented in 2014 with the aim of attracting 8.7 billion dollars in foreign investment.

Based on these announcements, experts anticipate that Cuba plans to continue to regulate public access to the Internet along the lines of China and Russia, whose governments exert control over the web.