Q&A: CAPTCHA Creator Would Like to Tap Crowdsourcing to Fight Crime

GUATEMALA CITY, Jul 20 2011 (IPS) - If you use the internet, you will have come across CAPTCHA, a test to determine whether the computer user is human or a machine. What you may not know is that one of its inventors, mathematician Luis von Ahn, comes from one of the poorest countries in Latin America, Guatemala. 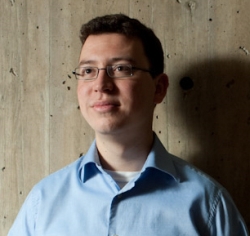 CAPTCHA (Completely Automated Public Turing test to Tell Computers and Humans Apart) displays those groups of distorted characters appearing at the end of many online forms. As they can only be deciphered by humans, they are used to prevent computer programmes or “bots” from using services like surveys and e-mail, and generating junk mail.

The ideas of Von Ahn, who was 21 when CAPTCHA was invented and is now 31, are aimed at making the internet a tool that everyone can contribute to building, and that is accessible to everyone.

One example is reCAPTCHA, a project he sold to Google in 2009. It is an extension of the CAPTCHA test that, at the same time, helps digitise books for use online. This method is being used to digitise 2.5 million printed books a year. Every time you decipher a reCAPTCHA, a word or phrase of a printed work is digitised.

Along the same principles, Duolingo is a system that will allow internet users to learn languages for free while helping to translate the web’s contents. This will overcome the language barrier that prevents sharing knowledge on the internet, and the limits of computers, which are unable to translate languages accurately.

Von Ahn has been shaping mass collaboration on the web since before the term “crowdsourcing” was coined in 2006. That year, he won the MacArthur Fellowhip, nicknamed the “genius grant”, which is awarded to U.S. citizens or residents who “show exceptional merit and promise.” In 2011, Foreign Policy magazine in Spanish named him the most influential intellectual in Ibero-America (Latin America, Spain and Portugal).

After Duolingo, Von Ahn, who is now a professor at Carnegie Mellon University in Pittsburgh, Pennsylvania, would like to “fight crime in Guatemala,” a problem that stands in the way of a focus on education, he told IPS in an email interview.

Q: Apart from producing tools that are useful for humankind, you are concerned about not wasting time. A: The time we spend doing things on the internet is enormous, and often we can make more use of it. This is what I have devoted myself to doing: finding ways of re-using, or making the most of, that time. In the United States, I believe people spend an average of three hours a day on social networks or YouTube.

What we are doing is providing a free language learning service, but at the same time people are translating part of the internet. So they are translating as they learn.

Hundreds of millions of people are excluded from enormous parts of the internet’s contents. Wikipedia in Spanish has only 20 percent of the contents in English. So we are excluding 500 million (Spanish-speaking) people from 80 percent of Wikipedia’s content.

The Duolingo project is nearly complete. We are just months away from launching it, and we will begin with translations into English, French, German and Spanish.

Q: You have used crowdsourcing as the basis of your initiatives. What potential does this method have to conceive solutions to technological or educational problems in poor regions? A: I would like to use it to help places like Latin America, and that is the reason I am working on Duolingo. With it, we will make all the contents of the internet accessible to everyone, anywhere in the world.

Q: Central America has very serious problems with poverty. Are you interested in making a contribution in this respect? A: I would love to. The main problem is that many of the things we do are based on the internet, and almost by definition, very poor people do not have access to the web. I think the first problem we will tackle will be crime. I don’t know how we will do it, but that is the kind of thing I would like to do after Duolingo.

Q: But why crime? Were you a victim of crime in Guatemala? A: No, fortunately I wasn’t. But I think I am the only person I know in Guatemala who has never been mugged or assaulted. And this happens not just in Guatemala, but in many parts of Latin America. It is something that is hampering our growth.

If we weren’t so worried about crime, perhaps we could be concerned about our education or something like that, but there is so much concern about crime that it simply has to be resolved.

Q: How do you see yourself contributing? A: The use of social networks and cell phones really helped the revolutions in the Arab world. And I believe that in the same way, it is possible for them to help address things like crime in Latin America, although I don’t know exactly how.

Q: Returning to the issue of poverty, do you think technology has advanced so much that the gap for the most dispossessed is insurmountable? A: I hope not. My dream is that technology will help poor populations to improve their lot.

One of the ways it might be achieved is through mobile phones, which are used by many more people than the internet. A lot of people have these phones, and eventually we are going to be able to connect them to the internet practically for free, I hope within the next five years.

At that point we will be able to reach more of the poor population. That could have an incredible impact on education. The proportion of the world population using the internet is still less than 30 percent, and the other 70 percent is made up of the poor.