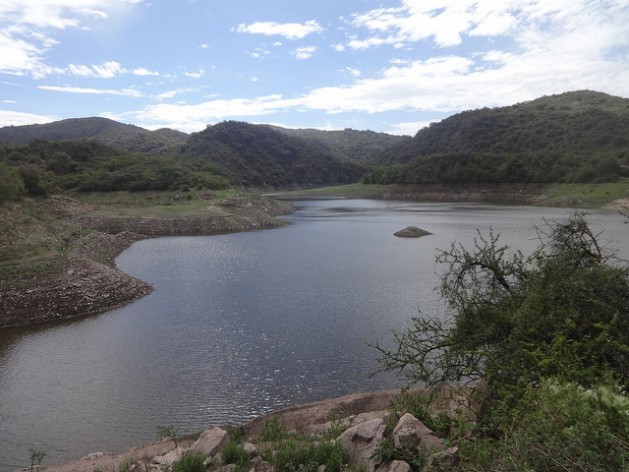 The water level in the Dique La Quebrada, the reservoir seven km from Río Ceballos, has never been lower. Credit: Fabiana Frayssinet/IPS

RÍO CEBALLOS, Argentina , Dec 6 2013 (IPS) - This small town in the semi-arid central Argentine province of Córdoba now has a 24-hour hotline for people to report their neighbours for sprinkling their lawns or using water to clean off the sidewalks.

The water shortage is felt throughout the province, but it is especially bad in the most populous areas – the provincial capital Córdoba, the Sierras Chicas hills to the northwest of the city, and the Punilla valley.

Córdoba has the highest level of deforestation in Argentina. All that remains is five percent of the 12 million hectares of native forest that the province had at the start of the 20th century

And fires that broke out in August and September devoured 40,000 more hectares of forests and grasslands in the hills.

“Between 1998 and 2002, the equivalent of 67 football fields was deforested every day – an appalling figure,” Raúl Montenegro, the president of the Foundation for the Defence of the Environment (FUNAM), told IPS.

In recent times, rainfall has been scarce, and some towns in the hilly region have started to ration water, including Río Ceballos, a town of 30,000 located 30 km north of the capital.

The Dique La Quebrada reservoir, the town’s source of water, reached its lowest level ever – 13.5 metres below the height of the undersluice. The city government has scheduled 12-hour water cuts twice a week.

“We could see this coming,” local resident Omar Vergara told IPS. He has a collection of buckets scattered around his patio to catch rainwater and use it to water his plants and clean the floors.

Like other locals, he washes his car “with just a couple of buckets of water” and reuses “the less dirty” water from his washing machine, leaving the potable water for drinking and cooking.

And when people dare to use a hose to clean their sidewalk, they face the risk of being reported by their neighbours on a free round-the-clock hotline for complaints about wasteful use of water.

The more water a household consumes, the higher the rate charged. But filling a pool is still frowned on in this quiet town, where many people have come from the nearby city of Córdoba to live, drawn by the clean air and overall higher quality of life.

The local water company, the Cooperativa de Obras y Servicios Río Ceballos, is working to raise awareness on the need to save water.

The company manager, Miguel Martinesi, explained to IPS that consumption per person dropped from 270 to 170 litres a day, compared to 400 litres per person in the provincial capital.

“Everyone is on the alert. Locals warn each other not to water the lawn or plants, and not to wash their car or the sidewalk,” he said.

“We’ve been living in an emergency situation since 2005,” Río Ceballos Mayor Sergio Spicogna told IPS. He said the water crisis was due to a drop in rainfall, combined with explosive growth of the population since a new freeway was built connecting his town with Córdoba.

In the past, the reservoir, located seven km from Río Ceballos, also supplied two neighbouring towns, Unquillo and Mendiolaza, that have a total combined population of 40,000, “which made the situation much more problematic,” according to the mayor.

But the Dique San Roque reservoir, which supplies the capital, now also provides water to the two towns through a 30-km aqueduct. And the plan is to extend it to Río Ceballos.

The provincial authorities are planning alternative sources of water supply for the capital, so the surplus from San Roque can go to the Sierras Chicas.

But, Spicogna explained, they are costly plans that depend on “synergy” between the municipal, provincial and national authorities.

And piping the water long distances from the reservoirs isn’t the solution, according to Ricardo Suárez, the head of the Proyecto de Conservación y Reforestación de las Sierras de Córdoba, a local environmental organisation involved in the conservation and reforestation of the mountains.

”Bringing water from the Dique San Roque is a problem, because although the reservoir is bigger than La Quebrada, it is also below its normal level and has a much bigger – and growing – population to supply,” he said.

“The infrastructure works have always come late, consumption is much higher than what the works will be able to supply, and nature has a limit,” he said.

In the province of Córdoba, the second-most populous in Argentina, average rainfall is 779 mm a year and the shrinking of the native forest has increased evaporation of rainwater due to the lack of forest mass to retain it.

Little by little “this semi-arid system has become almost arid, with a tendency to turning into a desert,” Suárez said.

According to FUNAM’s Montenegro, the fires and indiscriminate logging undermined the functioning of the main water resources. “The ‘factories of water’ collapsed,” the biologist summed up.

The “more violent acceleration” of logging came in the 1990s, coinciding with the introduction of genetically modified crops like soy, maize and cotton, which also increased consumption of water, Montenegro said.

“Producing a kilo of soybeans means 1,500 to 2,000 litres of water have to go through the plant,” he said, to illustrate the problem.

“Many believe that most of the surface area in the province can be dedicated to agriculture, livestock and the planting of exotic trees, and that the tiny parks and reserves created by the governments are sufficient to preserve our native environments,” he said.

“But that is patently untrue. There is no future, and no environmental stability, without balanced coexistence of natural and productive environments,” he argued.

The construction of gated communities, industrial areas and major tourism complexes has also driven deforestation in the province.

Suárez said the solution would be a massive reforestation plan, rather than just new water infrastructure works.

“The Dique La Quebrada is going to dry up, it’s irreversible, because the basin is [85 percent] deforested. The soil is completely exposed,” he said.

Using volunteers and very few funds, Suárez’s organisation replanted 40 hectares of native forest, over the space of 14 years. “If reforestation plans were systematic, today the sierra would be one big native forest,” he said.

Martinesi, the water company manager, suggested other solutions. “We have to define which zones we want to grow, to be able to provide them with the necessary infrastructure, and which ones we don’t want to grow,” he said. “Otherwise we’ll have a serious problem in the medium term.”

He said climate change played a role in the water shortage, as there have been lengthy droughts, aggravated by the degradation of the ecosystem.

“But we should resolve the question of infrastructure, make sure the growth is orderly, and take full advantage of our water sources, before we say that things have become complicated because of the lack of rain,” he argued.

“Expecting a region to grow while depending on rainfall is irresponsible,” he added.