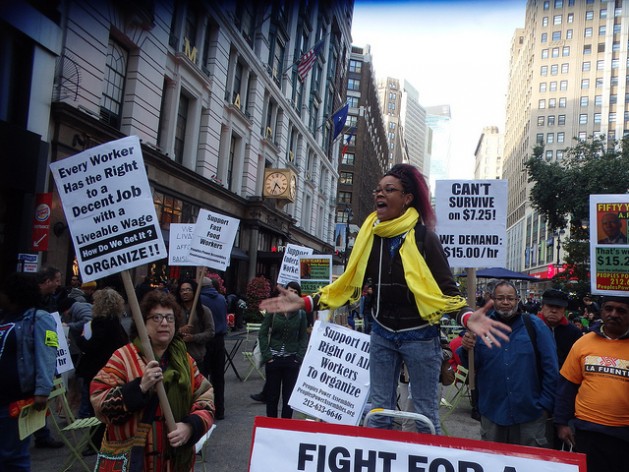 The same day, the president formally endorsed legislation that would incrementally raise the minimum wage to 10.10 dollars by 2016.

"When you’re cutting the pay for people at the bottom by one third, you shouldn’t be that surprised that you’re not making progress on poverty.” -- Jason Furman

“I think the fact that you see such a broad based list of economists there means that the economic case for raising the minimum wage is really mainstream and increasingly the consensus view of the economics profession,” Jason Furman, chair of the White House’s Council of Economic Advisers, told a panel at the Economic Policy Institute (EPI), a Washington-based think tank.

Labour rights advocates are also backing the proposal. “We call on Congress to enact a jobs bill, invest in our future, raise the minimum wage to $10.10, and devote its full attention to restoring full employment and raising wages,” writes Richard Trumka, the president of the AFL-CIO, a federation of unions.

The proposed legislation would raise the minimum wage by 95 cents per year over the next three years. This would increase the earnings of full-time minimum-wage workers from 15,000 dollars to 21,000 dollars per year.

Additionally, the bill would also seek to raise the minimum wage for tipped workers by 70 percent. Sen. Tom Harkin, one of the proposal’s co-sponsors, says the tipped minimum wage has not increased in 20 years.

Harkin argues that the fall in minimum wage is related to public policy that no longer guarantees an equal opportunity for low-income citizens.

“We used to agree that if you worked hard and played by the rules you could have a good economic stake in our society,” he said at Tuesday’s panel discussion. “But in recent years it’s been alarming to see how these fundamental principles and values are being degraded in our public policies.”

“Those in the corporate world, some of the largest corporations in the world, decided that they’re just going to take more,” he said Tuesday. “They’ve assembled enough poor workers to make themselves rich.”

Senate Democrats intend to introduce the bill later this month.

The White House’s Furman contends that the proposed legislation would lift 1.6 million people out of poverty, while 8.6 million would witness a wage hike. Lawrence Mishel, the EPI’s president, estimates that as many as 27 million people will benefit from the proposal.

By many analyses, the United States is vastly overdue for an increase in its minimum wage. Furman and other economists note that when inflation is taken into account, today’s minimum wage is below where it was in 1950.

“The minimum wage was on an upward trend and reached its peak in 1968 and has fallen by one-third since,” Furman says.

“If you look at the poverty rate and don’t take into account public policy, it’s actually gone up since 1967. When you’re cutting the pay for people at the bottom by one third, you shouldn’t be that surprised that you’re not making progress on poverty.”

Part of the reason for this tardiness clearly comes down to political wrangling. The Harkin-Miller bill would thus also link and “index” future wage increases to inflation, taking the decision-making process out of the polarised confines of the U.S. Congress.

“When our bill is fully implemented, the minimum wage will no longer be at poverty wage,” Harkin explained. “The other thing is indexing, so it can’t fall down below that [poverty level] again.”

Yet business interests have long rallied against this idea.

“Indexing the minimum wage to inflation means that employers will likely be faced with automatically increasing labour costs without an automatic increase in revenues or profits,” Randy Johnson, a senior vice-president at the U.S. Chamber of Commerce, the country’s largest business lobby group, told IPS.

Conservatives also contend that increasing the minimum wage would lead to an increase in unemployment. As businesses incur higher labour costs, they say, they will inevitably be less likely to hire.

Labour groups argue that employers will be able to compensate for higher wages because of increases in worker productivity. “If it [the minimum wage] had kept up with productivity growth [since 1969] it would be $18.72,” writes Trumka in an analysis sent to IPS.

The Chamber of Commerce also raises concerns about a spike in unemployment. “While raising the minimum wage may help some low wage workers who retain their jobs,” Johnson says, “it will lead to less job creation and higher unemployment that falls disproportionately on the weakest segments of society, those with few skills and lower training.”

Furman, however, asserts that “the vast bulk of studies find that minimum wage has zero effect on unemployment.” In fact, he suggests that a higher wage would have an opposite effect, helping to “attract, motivate, and retain workers.”

Despite this, most Congressional Republicans will likely oppose the proposal, particularly in the heavily conservative House of Representatives. Miller admits to heavy Republican opposition, but notes that some Republicans have indicated that they may be able to find a way to commit to the bill.

While Democrats are willing to negotiate with Republicans on the bill, they remain adamant about a commitment to 10.10 dollars an hour. Harkin says this is a “bottom line”.

“If we had kept up the minimum wage from 1968, it’d be about 10.75 dollars an hour,” he says. “So to somehow bring it below that and lock in a sub-par minimum wage for the future is just not acceptable.”

Harkin also believes that an election year is the most appropriate time to fight for minimum wage legislation. He notes that public pressure leading up to the 1996 elections prompted Republicans to vote in favour of increasing the minimum wage.

“The American people are calling on us to do this clearly and unequivocally, and pressure will build,” he says.