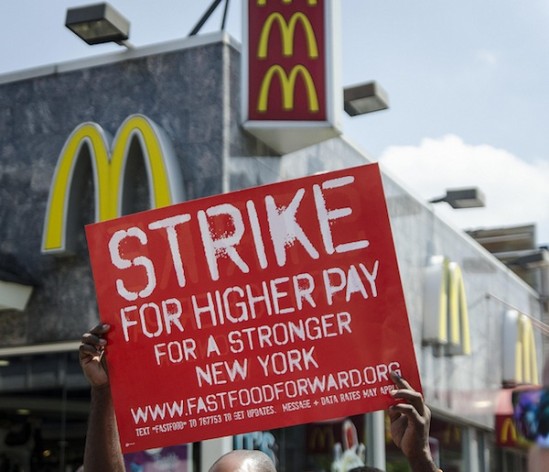 WASHINGTON, Aug 29 2013 (IPS) - Workers at fast-food restaurants in 60 cities across the United States went on a one-day strike Thursday, the largest action yet in a strengthening year-long push for higher wages and the opportunity to form unions without retaliation.

The strike affected around 1,000 stores, organisers said, and also included workers in some national retail chains. The push for higher wages coincides with a broader movement to raise the U. S. minimum wage of 7.25 dollars per hour, one of the lowest among developed economies.

For those who took part in Thursday’s strike, median wages were estimated at less than nine dollars an hour, which both workers and labour rights activists say is impossible to live on in almost any part of the country. They are demanding “living wages” of 15 dollars an hour, more than twice the current federal minimum wage.

“Raising wages for low-wage workers is an economic necessity for communities all across the country,” Pastor W.J. Rideout III, with the Inter-Faith Coalition of Pastors in Detroit, said Thursday. “The only way to get our economy going again is to put more money in the hands of consumers. These striking workers are the best stimulus our economy could have.”

Fast-food workers’ low wages stand in startling contrast to the sector’s reported profits of about 200 billion dollars a year.

"When a parent is forced to work two jobs and still cannot support his or her family, it is clear that there is something very wrong."
-- Mary Lassen

“For too long, large corporations have been able to ignore the needs of their employees while continuing to rake in huge profits,” Mary Lassen, managing director of the Centre for Community Change, a Washington advocacy group, told IPS in a statement.

“When a parent is forced to work two jobs and still cannot support his or her family, it is clear that there is something very wrong. It is time that corporations address the problems facing low-wage fast-food workers.”

The industry has responded by warning that higher wages would translate into fewer jobs. Critics also suggest that these entry-level jobs are mostly important only for teenagers and those starting out in the workforce.

“The story promoted by the individuals organising these events does not provide an accurate picture of what it means to work at McDonald’s,” a spokesperson for the restaurant chain told IPS. “Our history is full of examples of individuals who worked their first job with McDonald’s and went on to successful careers both within and outside of McDonald’s.”

Yet a recent study, released in July by the National Employment Law Project, found that little more than two percent of fast-food jobs are managerial, professional or technical, thus providing “significantly limited” opportunities for advancement.

Others note that low-wage jobs in the United States, including those at fast-food restaurants, play a central role for a broad cross-section of workers.

“It is a common myth that very low-wage workers – workers who would see a raise if the minimum wage were increased – are mostly teenagers,” write David Cooper and Dan Essrow, authors of a new briefing paper and researchers with the Economic Policy Institute, a Washington think tank.

As the United States has stumbled through the aftermath of the 2008-2009 economic downturn, fast-food and other low-wage jobs have become increasingly important, adding some 60 percent of post-recession jobs. That centrality looks set to continue, with government estimates projecting that fast-food jobs will post the sixth-highest growth of all jobs between 2010 and 2020.

For this reason, analysts are now suggesting that low-wage workers – long seen as particularly difficult to organise – will become an increasingly powerful voice in demanding higher compensation.

Thursday’s strike came just a day after tens of thousands of people turned out to mark the 50th anniversary of the March on Washington for Jobs and Freedom, one of the watershed events in the U.S. fight for civil rights.

At the commemoration, President Barack Obama reminded observers that the original marchers were demanding not only racial equality but also economic opportunity.

“It’s along this second dimension – of economic opportunity, the chance through honest toil to advance one’s station in life – where the goals of 50 years ago have fallen most short,” the president said Wednesday.

“[B]lack unemployment has remained almost twice as high as white unemployment, with Latino unemployment close behind. The gap in wealth between races has not lessened, it’s grown,” he stated. “The position of all working Americans, regardless of colour, has eroded.”

In the United States, upward mobility has become far more difficult over the past decade, the president noted, with labourers of all races seeing stagnating wages despite soaring corporate profits.

“The test was not, and never has been, whether the doors of opportunity are cracked a bit wider for a few,” he continued. “It was whether our economic system provides a fair shot for the many.”

One indicator of this lack of progress is that, during the 1963 march, protesters demanded a minimum wage that would translate to more than 13 dollars an hour at today’s rates. Even if the government had continued to update the minimum wage over the past half-century merely to keep up with inflation, this rate would today be around 10 dollars an hour.

Some legislative proposals have been made to set the minimum wage at this level, and in January Obama formally supported a modest rise to 9 dollars an hour. Yet all such proposals currently remain nonstarters in the Congress, evidently due to strong pushback from business groups.

Still, public support for an increase in the minimum wage is strong. According to polling carried out last month for the National Employment Law Project, 80 percent of U.S. adults support a 10.10 dollar minimum wage, with strong backing from all demographic and ideological categories.

In response to this public sentiment, U.S. states and cities alike have been stepping in and in just 2013, at least 13 states and several cities unilaterally raised their minimum wages.