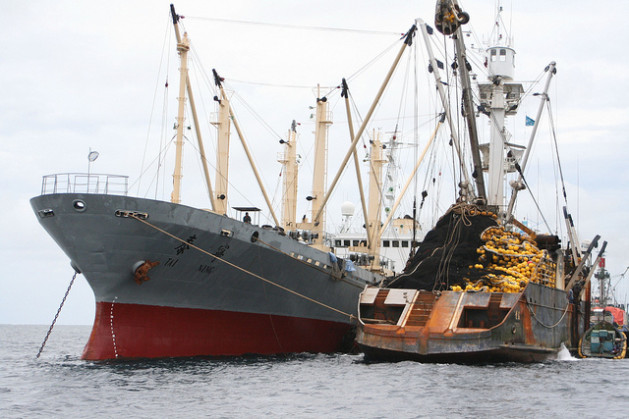 A purse seiner (right) unloads its catch of frozen skipjack and bigeye tuna to a freezer ship (left), for canning in Asia. Credit: Christopher Pala/IPS

Proponents are lauding both the strength and scope of the Maritime Labour Convention (MLC), agreed under the auspices of the U.N.’s International Labour Organisation (ILO). On Tuesday, the convention became binding law for the first 30 countries to have ratified the agreement.

Yet advocates are also now stepping up calls for the United States to sign on to the MLC, noting that the country is one of the last major holdouts on the accord.

“This is the most significant accomplishment in seafarers’ rights in the entire history of seafarers’ rights, which goes back thousands of years – consolidating in one document 60 or 70 ILO instruments,” Douglas Stevenson, director of the Centre for Seafarers’ Rights at the Seamen’s Church Institute, a legal advocacy group, told IPS.

“One of the big advances over prior conventions is that it includes really good enforcement mechanisms, leaving the primary responsibility up to the flag state,” referring to the country where a ship is registered.

Indeed, according to the ILO, “the requirements for the [MLC’s] entry-into-force were intentionally made the most stringent of any ILO Convention ever adopted in the Organisation’s 94-year history: This was done to avoid what is called a ‘paper tiger’ so that it would result in real change.”

The convention is widely known as the first maritime “bill of rights”, and covers issues of fair wages and benefits, working and living conditions, regulating recruiters and handling labour complaints. The MLC was to go into effect a year after the 30th country ratified it, a trigger point that was met last year when the government of the Philippines did so.

The Philippines is one of the top suppliers of ocean-going labourers, comprising nearly a quarter of the maritime workforce.

“As such, it consolidates the rights of seafarers to a safe and secure workplace, fair terms of employment, decent living and working conditions, social protection such as access to medical care, health protection and welfare, and, importantly, freedom of association.”

The chair of the ITF seafarers’ section, David Heindel, noted that the trade unions were now committing themselves to the “continuing quest” of encouraging more countries to ratify the convention.

“[We] hope to have the U.S. Senate vote on ratification before the year’s end,” Heindel, who also serves as secretary-treasurer of the Seafarers International Union of North America, told IPS.

“We owe it to the world’s seafarers and look forward to a speedy ratification and an effective enforcement policy.”

Before the U.S. Senate can vote on the issue, however, the administration of President Barack Obama must formally sign the convention and then request the Senate to authorise its ratification. Currently, an inter-agency advisory panel is looking at the specifics.

“The U.S. government believes the MLC is an important addition to protect workers at sea, and we welcome its entry into force for 30 countries this week,” a U.S. State Department spokesperson told IPS.

“The United States was actively involved in the negotiations, and we supported its adoption in 2006. At present we are reviewing the convention to determine whether to submit the convention to the Senate for its advice and consent.”

That review is being coordinated by the U.S. Coast Guard. While the Coast Guard did not respond to IPS requests for comment, analysts have suggested that the agency does support ratification, as the MLC offers a potent tool to crack down on ships in U.S. waters that are failing to adhere to international standards.

“It will be very important for the U.S. to ratify this convention, as doing so will go a long way towards eliminating substandard vessels from international commerce more generally,” the Centre for Seafarers’ Rights’s Stevenson says. “Further, given the size of the U.S. economy, it is almost impossible to make money operating a major ship without going through the United States.”

As of Thursday, some 49 countries had ratified the MLC, representing more than three-quarters of the global shipping industry.

In response, in early August the U.S. Coast Guard came out with a voluntary certificate programme aimed at easing this process for U.S.-flagged ships. But it is unclear whether other countries will accept this documentation.

The U.S. shipping industry is now mounting a strong push in favour of ratification, on the view that the new regulations ensure a level playing field for all shippers.

“The Chamber of Shipping of America is totally supportive of U.S. ratification of the MLC,” Joseph Cox, president of the chamber, an association of shipowners and operators, told IPS.

“We understand the administration is in the last stages of preparing the treaty and necessary implementing legislation for submission to the Senate. We are eager to work with the Senate and our seafarer colleagues to secure swift ratification of the MLC so the U.S. can join other nations in the maritime world in helping rid the ocean of substandard ships.”

Despite such broad industry, government and union support, it remains uncertain how much appetite for ratification there will be in the U.S. Senate, where Republicans have become increasingly suspicious of international covenants in recent years.

Last year, over the objections of industry and the military, conservative lawmakers sank a Senate push to ratify the Law of the Sea Treaty, a U.N. agreement that over the past three decades has been agreed to by nearly every country except the United States.