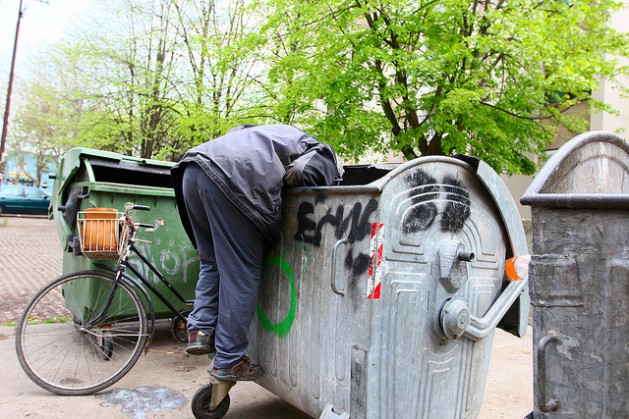 In 2010, 17.2 million households, 14.5 percent (approximately one in seven), were food insecure, the highest number ever recorded in the United States. Credit: Bigstock

In addition to conventional support for the economically vulnerable, such as extending unemployment insurance, Obama’s proposal, released Tuesday, seeks to expand tax credits for moderate- and low-income earners while replacing any revenue losses by closing tax loopholes on high-income earners.

With a very conservative, Republican-dominated House of Representatives, it is unlikely that Congress will cooperate with the White House’s proposal. Indeed, Obama’s proposal is all the more striking in just how diametrically opposed it is to a recent Republican report on U.S. anti-poverty efforts, itself released on Monday.

As the 2014 election approaches, conservatives seem determined to reemphasise their opposition to welfare programmes. On Monday, Paul Ryan, a member of the House of Representatives and the Republicans’ lead budget expert, released a report criticising social safety net programmes stemming from the “War on Poverty,” a 1960s-era initiative designed to combat the effects of poverty.

Ryan suggests that key War on Poverty programmes have had the perverse impact of keeping poor people poor.

“The president’s budget is yet another disappointment, because it reinforces the status quo,” Ryan, the party’s vice-presidential candidate in 2012, said Tuesday. “It would demand that families pay more so Washington can spend more.”

The White House says the budget calls for ending “inefficient and unfair tax breaks that benefit the wealthiest”. During his speech Tuesday, Obama supported “closing tax loopholes that right now only benefit the well-off and the well-connected.”

Obama’s budget does seek to expand certain tax credits, such as the Child Tax Credit and Earned Income Tax Credit (EITC), both of which give low-income workers a greater return on their tax refunds.

Under the proposal, the EITC’s maximum refund for childless workers would double to 1,000 dollars. The credit would also become available to young workers between the ages of 21 and 24 as well as older workers up to the full retirement age.

The proposal seeks to balance this expansion of the EITC by closing “tax loopholes” for high-income earners. As in previous years, the proposal also stipulates that millionaires must not pay less than 30 percent of their income, in order to prevent them from taking advantage of tax preferences that have allowed some high-income earners to pay less in taxes than middle-class workers.

While Ryan and fiscal conservatives have voiced their support for the EITC in the past, some conservative analysts are arguing against Obama’s proposal to make the EITC more accessible to younger workers and workers without children.

“[The EITC] is an effective measure that has encouraged work,” Rachel Sheffield, a policy analyst at the Heritage Foundation, a conservative think tank, told IPS.

“What the president is proposing is expanding the EITC to individuals who don’t have children, so single adults, and that’s problematic because it’s likely … to have marriage penalties. It would potentially reward fathers who don’t marry or support their children. When the person marries the subsidy would be eliminated.”

Sheffield considers an expansion of the EITC equivalent to expanding welfare programmes, long a target of conservative ire.

How to measure poverty

The proposals from both President Obama and Paul Ryan state that they have the best interests of the poor at heart. But on Tuesday, Democrats struck back at Ryan’s budget, suggesting that years’ worth of proposals from the Republicans would have negatively impacted poor communities.

“For several years now, Chairman Ryan has proposed annual budgets that would deeply cut programmes for the poor,” Sharon Parrott, a vice-president at the Centre on Budget and Policy Priorities, a left-leaning think tank, wrote Tuesday. “The Ryan budgets have consistently secured between 60 and 67 percent of their budget cuts from programmes for low- or moderate-income people.”

Ryan’s report argues that under the War on Poverty, the poverty rate in the United States has only decreased by 2.3 percent. But Parrot argues that Ryan misrepresents important statistics regarding poverty reduction.

Parrot contends that because the report relies on the official measure of poverty, rather than a calculation known as the Supplemental Poverty Measure (SPM), it ignores the role of certain social safety net programmes in fighting poverty, including the EITC, the Child Tax Credit and various low-income housing assistance programmes.

“Ryan buries this fact, failing to note the deep reductions in poverty under the SPM since the 1960s until page 201 of his report,” Parrot wrote.

Nonetheless, conservative analysts warn that the SPM has its own set of problems.

“By making it a relative poverty measure, even if the incomes of all Americans tripled over night, you’d still have poverty with this measure. The official poverty measure is a good measure of self-sufficiency, such as how many individuals are relying on government assistance.”

Meanwhile, economists cited by Ryan’s report have been claiming that their findings have been misconstrued.

For instance, the Columbia Population Resource Center’s Jane Waldfogel notes that Ryan only used the group’s data starting from 1969. In ignoring data between 1967 and 1969, she says, Ryan ignored 36 percent of the decline in poverty.

Likewise, Barbara Wolfe, an economist at the University of Wisconsin, says the report outright misstated her research on housing assistance and labour outcomes, while ignoring another of her studies that found that “the housing programme has more benefits than costs”.