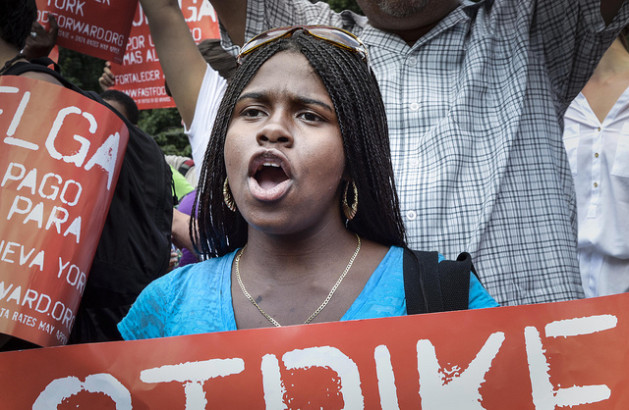 WASHINGTON, Sep 19 2013 (IPS) - Regulators here are proposing that most U.S. corporations be required to provide annual public reporting on how the pay received by their chief executive compares to that of their average workers, a requirement proponents say could be a first step in reining in an unprecedented swelling in executive compensation.

If the rule is adopted, corporations would need to calculate this ratio for all workers, “including full-time, part-time, temporary, seasonal and non-U.S. employees”, according to an official release. This would also apply to workers employed by a company’s subsidiaries, including those not located in the United States.

“It was misaligned pay that caused bankers to blow up Wall Street in the first place." -- Bartlett Collins Naylor of Public Citizen

The Securities & Exchange Commission (SEC), which voted to approve the proposal on Wednesday, was directed by the U.S. Congress to create the pay gap rule nearly three years ago. Although full details have not yet been made public, proponents of the rule say the proposal appears to have come out quite strong.

“We think it’s a home run – it includes basically everything we wanted,” Sarah Anderson, director of the Global Economy Project at the Institute for Policy Studies, a Washington think tank, told IPS.

“There was an intense effort made to water down this rule, particularly to allow companies to exclude overseas and part-time seasonal workers, so we’re thrilled to see the SEC stood up to that pressure. It’s important that shareholders and the public understand that the process of globalising the workforce and the extreme pay gap within companies have just as much of a detrimental effect for U.S. companies that might be operating in other countries as for U.S. workers.”

At 3-2, Wednesday’s vote by the SEC commissioners was close, with both “no” votes coming from Republican commissioners. Company executives and business lobby groups have repeatedly stated in recent years that the new rule would be burdensome, warning that the information is unnecessary and only feeds into populist attempts to embarrass top executives.

On Wednesday, the Centre on Executive Compensation, an advocacy group that has strongly opposed the pay ratio requirement, criticised the new proposal as a “political disclosure, rather than a substantive one”.

The U.S. Chamber of Commerce, the country’s largest industry lobby group, likewise came down on the rule as “another example of special interests promoting policies contrary to the interests of investors and the businesses they invest in”.

Yet the Institute for Policy Studies’ Anderson notes that since the late 1970s management scholars have been warning against allowing CEO-to-worker pay ratios from becoming too large. She points to years’ worth of research that suggests that extreme pay differentials are bad for worker morale and productivity, thus making companies and the overall economy less efficient.

Yet in the United States, this pay gap has grown larger than at any other point in modern history. While CEOs of major companies in 1982 ago took home around 42 times the pay of their average workers, by last year that number had grown to 354 times larger, according to analysis by the AFL-CIO, one of the country’s largest labour unions.

While the new disclosure is seen as empowering shareholder decision-making, Anderson says it could also have an impact on workers around the world.

“One argument by corporations was that this calculation was too difficult to figure out because they didn’t know how much they were paying workers in other countries – another sign of companies’ attempts to distance themselves from taking responsibility for their actions in other countries,” she says.

“The SEC clearly didn’t buy that argument, and this rule emphasises that U.S. corporations are responsible for their overseas operations. Perhaps this could now help with the broader push towards corporate accountability.”

The new proposal is part of a mammoth financial-services overhaul bill, the Dodd-Frank Act, that passed Congress in 2010 and aimed at dealing with the regulatory failures blamed for leading to the financial collapse of 2008-09. The pay-gap rule, known formally as Section 953(b), is one of several regulations the SEC has been mandated to write to tighten oversight of CEO compensation, particularly in the banking sector.

“It was misaligned pay that caused bankers to blow up Wall Street in the first place, though because CEOs are so overpaid they can afford to attack anybody that makes even a small effort to reform how much money is wasted on them,” Bartlett Collins Naylor, a financial policy advocate with Public Citizen, a consumer advocacy group here, told IPS.

“This new proposal seems generally fine, though it’s such a simple rule it’s hard to see how they could screw it up. Imagine – it only took the SEC 1,825 days to implement the first Dodd-Frank rule on pay reform!”

Naylor did express some frustration over some of the exemptions the SEC has included in the new proposal, however. These include small companies as well as “emerging growth” corporations, meaning those with less than one billion dollars in annual gross revenues.

In both instances, Naylor says, calculating the ratio between a CEO’s pay and that of a median employee should be very simple.

If the rule eventually passes, the United States would be the only country to require such disclosure. That may make sense, however, given that the pay gap between workers and company heads is larger here than anywhere else in the developed world – another indication of broader inequality that continues to grow.

On Tuesday, the U.S. Census Bureau released an annual study on poverty that found that both annual median income and the poverty rate failed to change over the previous year. This means that average full-time workers in the United States are actually receiving lower compensation than they were in the early 1970s, according to the Economic Policy Institute, a think tank here.

And last week, a California researcher published findings showing that U.S. economic inequality is currently worse than at any time since 1927. In looking at tax data, economist Emmanuel Saez found that, last year, the top 1 percent of U.S. earners took in some 19.3 percent of all household income, while the top 10 percent took in nearly half of all income.