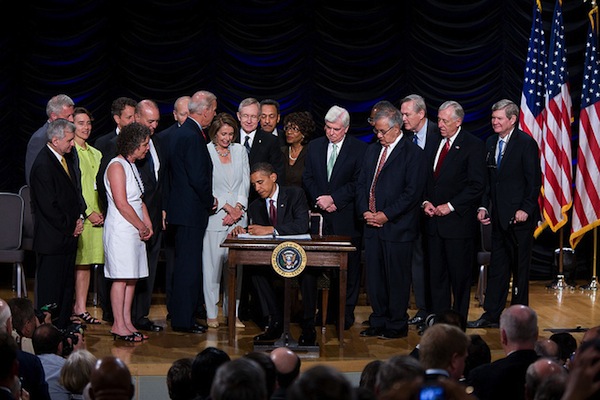 WASHINGTON, Aug 28 2013 (IPS) - Three years after the passage of landmark legislation aimed at strengthening regulation of major U.S. companies, one of the most criticised disparities characterising today’s corporate culture – the outsized compensation offered to top executives – continues to grow.

These extraordinarily lucrative salaries and benefits appear to have little connection to overall corporate performance. According to estimates released Wednesday, 38 percent of the top-paid chief executive officers (CEOs) of U.S. companies over the past two decades were fired or headed companies that were either bailed out by taxpayers or forced to pay significant fraud-related fines.

“An alarming number of CEOs are not adding exceptional value to [the U.S.] economy. They are extracting vast sums from it,” a new report from the Institute for Policy Studies, a Washington think tank, stated.

“An alarming number of CEOs are not adding exceptional value to economy. They are extracting vast sums from it.”
-- The Institute for Policy Studies

“American chief executive compensation continues on what has become an inexorable upward march, even as the overall economy sputters through five years of Great Recession and tepid recovery. The most widely heralded CEO pay reforms…have so far done little to slow the executive pay march.”

The study looks at the performance of the 241 CEOs who have ranked among the United States’ 25 highest-paid executives at some point over the past 20 years. Researchers found that many of their companies reported “blatantly” poor performances.

Nearly a quarter of the companies either shut down or received government bailouts following the 2008-2009 financial crash. Eight percent of these CEOs were fired but still received final bonuses averaging 48 million dollars, while an additional eight percent headed companies that had to pay fraud-related settlements of more than 100 million dollars per firm.

“Shareholder representatives say that the problem of excessive CEO pay is so widespread that even if you wanted to create a portfolio of those companies that enforce reasonable CEO pay, it would be very difficult to do so,” Sarah Anderson, an author of the new report and director of the Global Economy Project at the Institute for Policy Studies, told IPS.

“This is not just a problem of a few bad apples,” Anderson said. “Rather, it’s about a corporate culture that’s encouraging CEOs to demand this type of compensation – even though it’s bad for workers, shareholders and taxpayers.”

The average compensation for heads of the country’s 500 largest companies was around 12.3 million dollars in 2012, according to estimates by the AFL-CIO, one of the United States’ largest trade union federations. Excluding an unusual massive pay cut taken by one executive (Apple CEO Tim Cook), that figure rose five percent over 2011, despite the fact that median incomes for most U.S. households fell from 2009 to 2011 by 0.4 percent.

CEO pay has skyrocketed in recent years compared to average U.S. salaries. In 1993, executive salaries were around 195 times those of average workers, according to the AFL-CIO. Last year, they were 354 times larger.

“Two decades have essentially recalibrated our nation’s moral sensibilities,” the Institute for Policy Studies report states. “The outrageous has become the everyday.”

Meanwhile, this U.S. “model” of outsized executive salaries is widely credited with encouraging executives in other countries, particularly Europe, to push for similar levels of compensation, to the anxiety of top economic analysts.

“We must move in the direction of more prudent compensation practices,” Christine Lagarde, head of the International Monetary Fund, the Washington-based institution tasked with ensuring global economic stability, said in January at the World Economic Forum.

“Excessive inequality is corrosive to growth; it is corrosive to society…We can already see too many signs of waning commitment – dilution of reforms, delays in implementation, inconsistency of approaches.”

In the aftermath of the 2008-2009 financial crisis, much of the legislative push to reel in executive pay in the United States became part of a huge bill known as the Dodd-Frank Act, which is aimed at strengthening oversight of the financial services industry and broader corporate culture.

While that bill, signed into law in 2010, mandated federal regulators to take multiple steps to address the issue of excessive executive compensation, today relatively few of these rules have been finalised.

Some of those that have – including allowing shareholders to vote regularly on executive salaries – are less effectual than was anticipated. In fact, the new report includes a detailed “scorecard” of the efficacy of these reforms, both proposed and potential, that affect executive compensation in the United States and Europe.

“We’ve got more work to do,” Obama said on Jul. 24. “Nearly all the income gains of the past 10 years have continued to flow to the top one percent.”

“The average CEO has gotten a raise of nearly 40 percent since 2009. The average American earns less than he or she did in 1999.”

Some movement is ongoing to address executive compensation. In early September, the Securities and Exchange Commission (SEC), which regulates all companies listed on U.S. stock exchanges, is slated to finalise a rule that would require corporations to regularly publish the ratio of pay between its workers and executives.

While some business interests have derided such disclosure as unnecessary (and legislation proposed in June would undo it completely), at least one important lobby group, the Business Roundtable, told IPS that it would be withholding judgement until after details of the rule, known as Section 953(b), are published.

And while there is some concern over how the SEC will allow companies to define their employee pool when calculating this ratio, advocates of stricter regulation are saying this would be an important step.

“We do think this is a big deal, in that it legitimises the idea that narrow ratios are a good practice,” the Institute for Policy Studies’ Anderson says.

“Eventually, you could also use those ratios in other ways – considering that ratio when determining government contracts, for instance, or linking the ratio to favourable tax policies.”