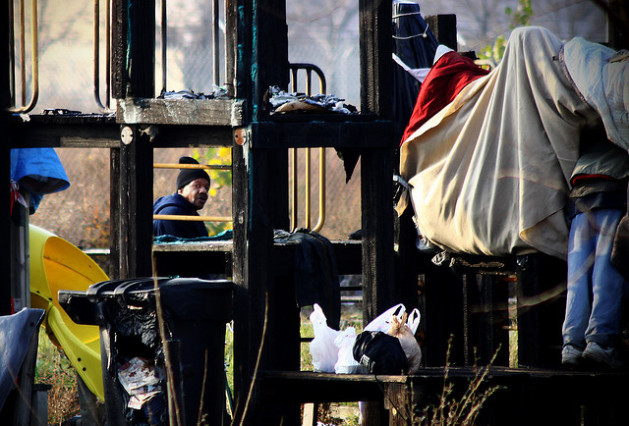 A homeless man looks from his makeshift playground shelter on Third Street in Detroit, Michigan. Credit: Jeffrey Smith/cc by 2.0

WASHINGTON, Jul 24 2013 (IPS) - President Barack Obama is vowing to spend his remaining time in office encouraging bipartisan efforts to strengthen the U.S. middle class by ensuring it is open to those from all backgrounds.

“Thanks to the grit and resilience of the American people, we’ve cleared away the rubble from the financial crisis and begun to lay a new foundation for a stronger, more durable economic growth,” the president said in a major address Wednesday. “We are not a people who allow chance of birth to decide life’s winners and losers.”

“In the civil rights movement, some blacks would refer to whites as allies, but in this fight for America’s soul and dignity and economic fairness, there are no allies. We are all in this thing.” -- Congressman Keith Ellison

Yet a new analysis is suggesting that a half-century after the apex of the U.S. civil rights movement, relatively little progress has been made in education, poverty and wages.

“The outlook of young people today would be so much different if they knew that when they finished high school or college, they could get a job,” Algernon Austin, director of the Race, Ethnicity and the Economy Programme at the Economic Policy Institute, a Washington think tank, said at a symposium this week.

“For young people of colour in particular, when they face such high levels of unemployment, it increases their changes of getting tangled in the criminal justice system.”

“We have to go from protest to action to outcome,” Ernest Green, a former assistant secretary of labour, told IPS. “What the [EPI] is doing is important – it’s obvious that in this atmosphere, no one person or organisation can carry the full load.”

The study’s release was timed to coincide with the March on Washington for Jobs and Freedom, a touchstone 1963 event that brought hundreds of thousands of demonstrators to Washington to urge equal civil and economic rights for African Americans. At the event, the civil rights leader Martin Luther King, Jr., gave his famed “I Have a Dream” speech.

“We are celebrating the 50th anniversary of the March on Washington for Jobs and Freedom, as we should be, and yet we have a racial wealth gap that’s growing,” Clarence Lang, a professor of African and African American studies at the University of Kansas, said at Monday’s symposium.

“We also have an unemployment rate that is catastrophic – if it characterised the majority of the country, we would declare a national disaster.”

According to the EPI researchers, the lowest black poverty rate on record was 22.5 percent in 2000, meaning that nearly a quarter of the African American population was still living at or below the poverty line. When the economic downturn began in December 2007, that rate rose to 27.6 percent, while the white poverty rate was only 9.8 percent.

In order to lift a family out of poverty, a full-time worker would have to be paid a minimum wage of 13 dollars an hour, experts have said. Yet the current minimum wage, after adjusting for inflation, is 7.25 dollars per hour.

Education has long been highlighted as one of the top ways to combat the high black unemployment and poverty rates, although the EPI study outlines several problems with this approach. During the 1960s, for instance, more than three-quarters of black children attended majority-black schools, while today almost the exact same proportion attends majority non-white schools.

Segregated schools have long been found to lack equal resources as schools with majority white students, which the EPI suggests violates the U.S. belief in equal opportunity.

According to William Spriggs, the chief economist at AFL-CIO, one of the country’s largest labour unions, education is only one of the solutions to this problem.

He cited the recent U.S. court case in which a neighbourhood watch member shot and killed a black teenager in Florida and was acquitted, arguably largely due to a law allowing the use of deadly force if one feels threatened, as an example of the race culture that  still exists.

“What people need to understand about the [Trayvon] Martin case is what that jury was saying about young black men,” Spriggs said. “Do you really have to ask why young black men are having a hard time getting jobs? In the African American community, yes, education is important, but there is a lot more going on.”

According to Lang, one of the key problems being little discussed in the public debate today is the general notion that a black youth walking around at night is “up to no good”.

“If we want to talk about what the key issue is, we have to talk about [racial profiling],” Lang told IPS. “It affects job prospects, it affects families and, indeed, it affects someone’s ability to walk around minding his or her own business and not being harassed.”

Such profiling, critics say, re-introduces a divisiveness that many saw as being weakened during the March on Washington and related awareness-raising of the 1960s.

“We are at a moment when there are no allies, there is just ‘us’,” Keith Ellison, a member of the U.S. Congress, said Monday. “In the civil rights movement, some blacks would refer to whites as allies, but in this fight for America’s soul and dignity and economic fairness, there are no allies. We are all in this thing.”