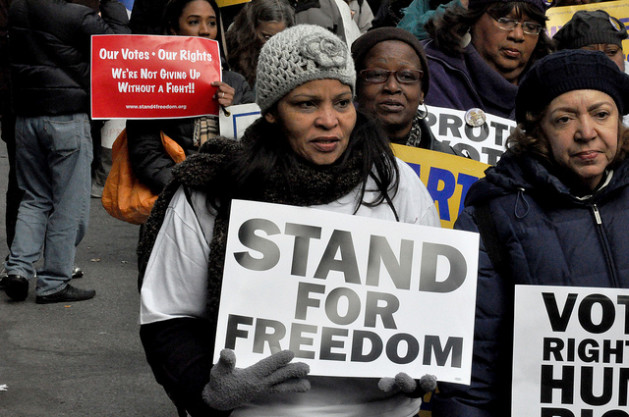 WASHINGTON, Jul 4 2013 (IPS) - Advocacy groups here are reacting with frustration as several southern U.S. states have moved to enact stricter voting requirements in the wake of a recent Supreme Court decision that rolled back key legislation that had safeguarded minority voters for decades.

Following last week’s five-to-four Supreme Court decision overturning a key part of the Voting Rights Act, nine southern states with a history of discriminatory voting requirements are now able to change their election laws without approval from the federal government.

“Basically the voter [photo] ID is a solution looking for a problem." -- Kathy Culliton-Gonzalez of the Advancement Project

Chief Justice John Roberts wrote the majority opinion, stating: “Our country has changed. While any racial discrimination in voting is too much, Congress must ensure that the legislation is passes to remedy that problem speaks to current conditions.”

Yet just 48 hours after the decision, Texas, Mississippi, Alabama and South Carolina announced plans to push through together voting restrictions that critics are warning could disenfranchise minority voters.

“Limiting the voices that can be heard is repugnant to what the country stands for,” Andrew Blotky, director of legal progress the Center for American Progress, a liberal think tank, told IPS. “We have always expanded the ability of people able to participate fully in our society, not restrict it.”

Just two hours after the Supreme Court decision came out, Texas announced that its voter identification law, requiring the presentation of a government-issued photo ID, would go into immediate effect.

Texas Governor Rick Perry also signed into law a new congressional voting map that is almost identical to the map that was ruled discriminatory last year, according to Kathy Culliton-Gonzalez, director of voter protection at the Advancement Project, an advocacy group.

“It’s not really that [southern states] weren’t treated equally; it’s about the fact that they earned this reputation to not be trusted,” Culliton-Gonzalez told IPS. “There is a reason that Texas, Mississippi, Florida and North Carolina were all covered in Section 4 [of the Voting Rights Act].”

Texas does offer free identification certificates for residents who lack other forms of photo ID, but the documents required to obtain these certificates are costly. According to Culliton-Gonzalez, some residents can be forced to drive up to 400 kilometres to apply for the free certificates, which is impractical for many voters, particularly those who are poor.

According to Think Progress, an advocacy group associated with the Center for American Progress, about 613,000 North Carolinians currently lack the required photo ID, and nearly one third of these are African American.

Florida, too, is looking to cut the option to vote early, which has been seen as a key tool by which to allow more citizens to vote. Analysts suggest that eliminating early voting will have particularly serious consequences for African-American voters, half of whom cast their ballots during the early voting period in 2008, and made up 22 percent of the early vote in 2012.

“It’s terrible,” Blotky told IPS. “Its not coincidence that these states have already tried to take advantage of the opportunity to enact laws that will restrict the votes of some people who really rely on the ability to have access to polls before the election because they have work or families to take care of.”

Looking for a problem

In Alabama, residents have already been required to show identification at the polls in the form of utility bills, Society Security cards, or a copy of birth certificates. Now, conservatives in the state legislature reportedly hope to have a new photo identification requirement in place by the June 2014 “primary” elections, during which voters will choose candidates for subsequent national races.

In next-door Mississippi, 62 percent of voters have said they approve of requiring photo ID at the polls, and are in favour of a new requirement that is now also aimed to be in place by June of next year.

“Mississippi citizens have earned the right to determine our voting processes,” Secretary of State in Mississippi Delbert Hosemann recently told the press, adding that ne one should have any barriers when casting their ballot. “Our relationship and trust in each other have matured. This chapter is closed.”

Supporters of a requirement for government-issued photo ID at polls say the move will combat a purported voter fraud problem. Opponents, however, claim this issue has been significantly over-exaggerated.

“In case after case last year, we found those allegations of voter fraud were just allegations – that’s all there was to it,” said Culliton-Gonzalez. “Basically the voter [photo] ID is a solution looking for a problem – it doesn’t solve anything at all.”

Photo IDs are intended to cut down solely on in-person fraud. Yet according to a study published in August 2012, there have been just 10 documented cases of in-person voter fraud throughout the United States since 2000. Three of those cases were in a single state, Texas, and there was one conviction.

The NAACP Legal Defense Fund, a legal assistance organisation that fights racial injustice, has stepped up its surveillance of the changes that are being implemented to voting requirements in the southern states that had been covered in Section 4 of the Voting Rights Act. The organisation says it intends to use these findings to show that the previous structure of the legislation was effective.

Importantly, the Supreme Court decision simply stated that the law was functioning off of an outdated formula for figuring out which states required federal oversight. The justices have struck down Section 4 only insofar as they have mandated that the U.S. Congress revisit the issue and come up with a new formula.

In that process, groups such as the NAACP see an opportunity to ensure that this legal cover is re-strengthened and continues as long as it’s required.

“There has been progress nationally and at the state levels, but that does not mean we’ve reached a place where those states are free from racial discrimination,” Leah Aden, assistant council with the NAACP Legal Defense Fund, told IPS. “The goal is to not only get people to register and turn out, but to make sure their votes are meaningfully counted.”