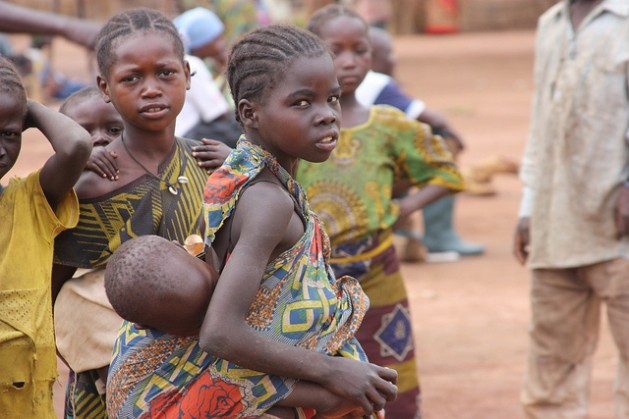 Since the Seleka coalition of rebels took power last March, over 200 000 people have been uprooted from their homes due to conflict. Credit: EU/ECHO/M.Morzaria/cc by 2.0

WASHINGTON, Jan 22 2014 (IPS) - The appointment of a new transitional president, Catherine Samba-Panza, in the Central African Republic (CAR) is generating optimism in some quarters that the country’s first female leader will manage to quell mounting ethnic strife.

President Samba-Panza was appointed on Monday, in the midst of inter-communal violence between Muslim Seleka and Christian militias.

“Right now the country’s on the brink of total anarchy.” -- Philippe Bolopion

“As CAR’s first woman head of state since the country’s independence, and with her special background in human rights work and mediation, [Samba-Panza] has a unique opportunity to advance the political transition process, bring all the parties together to end the violence, and move her country toward elections not later than February 2015,” John Kerry, the U.S. secretary of state, said Tuesday.

Yet some analysts here have quickly pushed back on the idea that the appointment of the new president offers a renewed chance for peace.

“There’s a predatory elite that has more or less sucked the country dry,” J. Peter Pham, the director of the Africa Centre at the Atlantic Council, a Washington-based think tank, told IPS. “Unfortunately they’ve just elected a member of that elite to be the interim head of state.”

While Samba-Panza is a Christian, she enjoyed close ties to the previous president, Michel Djotodia.

“She’s one of the Christian politicians who had thrown in their lot with the Seleka,” Pham says. “She has never been elected so much as a dogcatcher.”

Djotodia appointed Samba-Panza mayor of Bangui, the capital, in April, shortly after seizing the presidency. Although Samba-Panza was technically elected transitional president, the election took place within the National Transition Council, which is comprised of members appointed exclusively by Djotodia.

Pham believes that a Samba-Panza presidency raises questions about the international community’s long-term commitment to CAR.

“There’s no appetite in the international community, so there’s no long-term plan for the mission,” he says. “So I’m afraid what we’re actually facing is this so-called election spun in as positive a light as possible and used to cover an ignominious withdrawal.”

For the time being, the United States is still sending financial aid to help alleviate the crisis. On Monday, the government announced an additional 30 million dollars in relief funding for CAR, bringing the total U.S. contribution to humanitarian efforts in the country to approximately 45 million dollars.

“One fifth of Bangui is now living in a vast, miserable encampment as terrified citizens seek safety from violence and looting,” Nancy Lindborg, an official with USAID, Washington’s main foreign aid arm, said Monday after a two-day trip to CAR.

“The U.S. government has urgently ramped up our assistance to help deliver lifesaving food, water, and medical help to the more than 2.6 million women, children and men in urgent need throughout the country.”

“Since the Seleka took over power in March they have unleashed a wave of killings, burning entire villages, looting and viciously attacking civilians on a pretty large scale,” Philippe Bolopion, the United Nations director for Human Rights Watch (HRW), a watchdog group, tells IPS. “They descend on a village, kill a few people, chase everyone out of their houses, loot everything they can, burn the houses and move on.”

President Djotodia attempted to dissolve the Seleka because of the extremity of their war crimes and attacks on civilians.

“In late September, Djotodia decided he would dismiss [the Seleka] because they were getting out of control, and that’s when things went downhill,” the Atlantic Council’s Pham says. “He dismissed them but they had no place to go, and he never had the loyalty of the people on whom he hoisted himself.”

The Seleka continue to operate outside of government control and target civilians, which has led to clashes with the predominantly Christian militias. While former president Bozize initially created these militias – known as anti-balaka – to combat banditry, they began responding to Seleka abuses on Christians with similar attacks on Muslims, rapidly escalating the violence.

“They have targeted Muslim civilians only because they are Muslim. Their attacks are just as brutal and as vicious as the Seleka attacks were,” says HRW’s Bolopion. “When I was in CAR in November I talked to a Muslim villager who described how anti-balaka came to his house in the morning to take his grandkids, kids, and two wives out and slit every one of their throats.”

Although the conflict in CAR appears to be purely sectarian on the surface, the appointment of a Christian to the presidency by other Djotodia appointees indicates that the conflict is more nuanced. Pham posits that the violence is ethnic, rather than religious.

“The political elite have never had religion as a divisive issue, so religion isn’t really a source of conflict,” he says. “It’s not a religious conflict but religion marks people’s ethnic groups.”

The Seleka themselves have even killed Muslims living in majority Christian areas.

Tensions between the Seleka and anti-balaka reached a boiling point in December, as clashes between the two groups and their attacks on civilians drastically increased. Even though President Djotodia resigned on 10 January in an attempt to alleviate the chaos, the violence continues to raise fears of genocide.

“The situation has not stabilised at all on the ground, and we are very worried about mass retaliations against the Muslim population now that the Seleka are on the run,” says Bolopion. “Right now the country’s on the brink of total anarchy.”

As the violence continues, analysts have made proposals to help end the conflict.

“We think you need a two-track approach,” explains Bolopion. “One track is to bolster the capacity of civilian power on the ground. But we must also work on many tasks to reconstruct the country such as the longer-term solution of rebuilding the army, justice system and basic function of administration.”

France currently has 1,600 troops on the ground in CAR, while the European Union is expected to offer 500 soldiers to supplement French forces.

“They need all the help they can get because it’s very difficult,” Bolopion says.

Pham notes that the United Nations has authorised a force of up to 10,000, but states that nowhere near that number has materialised. “What we’re seeing in CAR is simply the evaporation of what few institutions there were,” he says.