ABIDJAN , Mar 14 2012 (IPS) - One-year-old Angama Ouattara lies on a rusted hospital bed, a drip attached to her tiny, left foot. Her mother, Minata, sits on the edge of the mattress, smoothing out the sheets she had to bring from home. 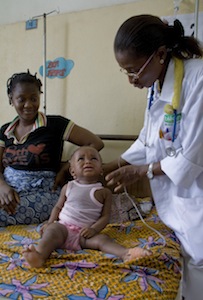 Six days ago, Angama was admitted to the paediatric ward of Abobo General Hospital in Cote d’Ivoire’s economic capital Abidjan. The little girl suffers from a severe case of meningitis, a dangerous inflammation of the membranes around the brain and the spinal cord. She is too weak to sit up or to even hold up her head.

A new national health regulation, which came into effect on Mar. 1, that offers free health services to pregnant women, children under five years and people suffering from malaria has saved her life.

“I just make enough money to put food on the table for me and my two children. I don’t have money to pay for hospital fees,” says the 27-year-old mother, who works as a fish vendor in a market in Abobo, Abidjan’s biggest slum. She could have not brought her daughter to the hospital if it wasn’t for free.

Ten months after the West African country started to emerge from a presidential election crisis during which almost all hospitals and clinics had to shut down for a good six months because they had been vandalised, looted and occupied, the new government under President Alassane Ouattara is trying to make public health care a priority.

Ouattara came to power in May 2011, six months after the country’s presidential elections, which were followed by a violent struggle for power between him and his predecessor Laurent Gbagbo, during which 3,000 people were killed and at least half a million displaced, according to the United Nations Refugee Agency.

One of the new president’s first actions was to ensure hospitals reopen their doors by implementing an emergency health care plan, called the Gratuité, which offered free health care to all citizens for nine months. This policy has now been replaced with a more permanent regulation targeting solely mothers, small children and malaria patients.

But in a country recovering from 12 years of political instability since a military coup in December 1999 that was followed by 10 years of Gbagbo’s autocratic rule, rebuilding a crumbling public health care system takes time. Hospitals have been suffering from lack of skilled staff, basic equipment and technology for years.

Last year’s post-election crisis made health care provision even worse, as armed forces and citizens stole whatever they could carry: medications, laboratory equipment, computers, beds and mattresses. Even ambulances were stolen, says Dr. Mamadou Keita, the national health department’s director of Abobo district. The slum, home to an estimated one million people, has currently only one ambulance.

“We haven’t been able to replace all equipment yet because we had to rebuild from zero. It’s a process that will take time since it’s very expensive,” he explains. “At the moment, we can only provide minimum services. We still don’t have lab equipment and lack basics like needles and thermometers. We often run out of drugs.”

Little Angama is a case in point. Even though the hospital does not charge for medical services and the bed, her mother has to purchase the girl’s IV liquids and medicines from a nearby pharmacy – because the hospital is out of stock. This costs her 20 dollars a day, while her average daily income is about four dollars.

“My daughter has been here for six days already. I have to borrow money from different family members. And while Angama is in hospital, I don’t work, so I don’t have an income at all. It will take me a long time to repay this debt,” Ouattara sighs.

The population’s need for good health services is greater than ever. During the post-election crisis between November 2010 and May 2011, many Ivorians were injured during clashes, and thousands of displaced persons lacked access to clean water, sanitation and were exposed to malaria.

In 2011, four million children were hospitalised in Abobo General Hospital alone, almost twice as much as the year before, says Dr. Tenedia Soro-Coulibaly, the hospital’s paediatrician.

“About 90 percent of those children had malaria. That was remarkable,” she says, even for a country like Cote d’Ivoire where malaria is the number one cause of child mortality, with about half of all child deaths caused by the disease, according to the World Health Organisation.

To make matters worse, markets and banks had to close when the country fell into crisis, meaning that people could neither access money nor food. As a result, malnutrition rates shot up, especially among children, the most vulnerable. “We also saw an increase in cases of cholera, meningitis and measles as well as diarrhoea and respiratory infections,” adds Keita.

The combination of looting and increased illness placed a burden on an already struggling health system that will take many more months to fix. “We often don’t have urgently necessary equipment to save patients’ lives,” laments Soro-Coulibaly. The paediatric ward’s oxygen bottles stand empty, while broken generators prevent doctors from doing their job during frequent power outages, she says. The impact of the post-election violence on children’s health has in fact been so severe that U.N. Children’s Fund (UNICEF) is worried the situation might have lasting negative consequences for Ivorian children – especially if the government does not manage to rebuild the health system quickly throughout the country.

While health service provision in Abidjan, the country’s economic centre, is improving slowly but surely, access to services remains extremely limited in Cote d’Ivoire’s western and central regions, which until today continue to suffer from sporadic violence.

“We lobby government for bigger budgets, but also urge them to decentralise the system. Currently, the majority of funds go to three hospitals in Abidjan, while there is still very little health service provision in rural areas,” says UNICEF Cote d’Ivoire deputy representative Christina de Bruin.

“The coming months will be a critical period regarding the long-term impact of the crisis on children’s future and well-being,” she adds. “A quick return to providing health and other social services is a key step to stabilise the country.”