CAPE TOWN, South Africa , May 5 2012 (IPS) - African countries need more support from the private sector in order to meet the United Nations Millennium Development Goals by 2015, which include important development targets like poverty reduction, and improved health and education. 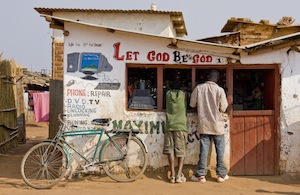 Governments cannot do it alone, development and economic experts told delegates at the MDG Review Summit, which took place in Cape Town, South Africa, from May 3 to 4.

Businesses, experts explained, are ideally positioned to foster economic growth and create jobs, which are needed to reach the first goal to end extreme poverty and hunger.

“Achieving MDG1 can have a positive impact on all the other MDGs,” said Beejaye Kokil, manager of the African Development Bank’s statistics department. Other development goals include the reduction in in the under-five mortality rate, gender equality or environmental sustainability.

African countries have already made some progress in their development through improved economic governance and reforms, including dropping the cost of doing business on the continent, noted Kokil. As a result, Africa today belongs to one of the world’s fastest-growing regions, with average annual GDP growth of six percent. It follows hot on the heels of China and India, which each have a GDP of about nine percent each.

But the trickle-down effect from economic growth to large-scale poverty reduction has been slow. Almost 40 percent of Africans continue to live below the poverty line of 1.25 dollars a day, according to 2011 World Bank statistics.

“That’s because GDP growth in Africa is not linked to jobs for the poor,” Kokil explained, since high economic inequality and skills shortage mean that most of the poor remain unable to access newly created employment opportunities.

“It’s not all rosy. MDG progress remains mixed. But the potential is there,” said Kokil.

He recommended that African countries move away from traditional donor aid and loan programmes towards an “aid for trade” model geared towards helping nations to develop trade-related skills and infrastructure to eventually become donor independent. This model places emphasis on making the private sector an integral part of a country’s development.

“The private sector has a huge role to play in Africa’s economic growth,” Kokil stressed.

Some of Africa’s key donors, like the United States, are already considering a shift away from providing unconditional financial aid to making investments that are bound to clear economic targets, said Terri Robl, minister counsellor for economic affairs at the U.S. Embassy in South Africa.

The U.S. Secretary of State Hillary Rodham Clinton, for instance, had announced earlier this year that “making investments with tangible outcomes” would become part of the U.S. aid policy, said Robl.

It means that the private sector will start playing a major role in development and many businesses have started to recognise this opportunity. Despite the fact that a company’s main focus remains profitability, corporate social responsibility has become a key element of doing business in Africa, Robl said.

“Sustainability as become a valuable asset to companies in and of themselves,” explained Robl. She is convinced that “the private sector can help governments leapfrog some of the MDGs”, by making sure that economic growth filters down to social development.

Meeting the MDGs needs much more than public-private partnerships, however. “Cooperation between governments and companies solves only two thirds of the problem. The last third must be the involvement of communities,” argued Professor Gerhard Coetzee, director of the Centre for Inclusive Banking in Africa at the University of Pretoria and a general manager at ABSA bank in South Africa.

He said that most Africans remain excluded not only from jobs but from using financial services because of high banking fees and cumbersome regulation.

“That is helpful, but not good enough to eradicate poverty in the long term. Ultimately, we need to move from microfinance to financial inclusion,” said Coetzee. “I see a clear link between a population’s access to finance and a country’s ability to reach the MDGs. By giving the poor access to financial services, we improve their income, thereby decreasing poverty levels.”

In South Africa, one of the continent’s strongest economies, only 63 percent of the those 16 years and older have a bank account, the most basic of all financial services, according to a 2011 survey by African financial research company FinScope.

“That shows that using banking to improve poverty and thereby the MDGs remains a major challenge,” said Coetzee. “We still have a long way to go.”