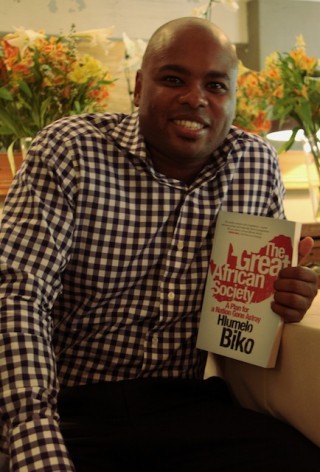 CAPE TOWN, South Africa, Feb 23 2013 (IPS) - In his new book, “The Great African Society – A Plan for a Nation Gone Astray”, Hlumelo Biko, the son of late Black Consciousness leader Steve Biko, says that if nothing changes in South Africa, the country will become engulfed by corruption, crime, social decay, hopelessness and anger.

Biko told IPS that, from an economic point of view, South Africa’s society remains untransformed – and where there has been transformation, it has been politicised.

“Those who are in close relationship with the (ruling) party have been allowed to prosper. Those who aren’t, have not prospered,” he said. “We have to create a society that rewards hard work as opposed to who you know.”

Although Biko works as executive chair of private investment firm Spinnaker Growth Partners, politics has been a central part of his life since his childhood. His mother, Dr. Mamphela Ramphele, is another well-known South African anti-apartheid activist and a former World Bank managing director.

Q: In your book, you analyse how South Africa got to where it is today – a nation ravaged by economic inequity. Would your father turn in his grave?

A: I don’t think he’d be happy. And I don’t think that people like my mother can sit by idly and watch. We ceded the space to a few politicians and allowed them to operate. And then we look back 10 years later and think, “Oh no, what happened?” South Africans need to go back to being very vocal about what their future should look like, so that we can all participate in effecting the future of this country.

Q: Your mother recently launched a new political party, Agang, in opposition to the ruling African National Congress (ANC). Are you a member?

A: No, I’m not. I will not join the party, but I am a supporter of my mother as her son. We share similar political views. I wrote this book to suggest policy in a way that both the current government and other political parties can use pieces of it to adapt to the policies they support. I hope that my mother is keen on using some of these mechanisms as part of her platform.

Q: One of your book’s main premises is that South Africa needs better governance.

A: Effective regulation means you have to have competent people. It shouldn’t matter what you did before 1994 (the end of apartheid). Yet those records still give people a leg up over others. We need to go beyond that and focus on technical capability. If you look at economies like China, they are where they are because their government operatives are, like it or not, extremely qualified. They are able to put forward effective policies. That’s where we need to take it.

Q: You suggest a silent truth and reconciliation commission for corruption. Why silent?

A: Shaming and naming people discourages them to come out. You want to flush out bad civil servants who have stolen money. That is fairly easy if you give them amnesty. My proposal is that they don’t have to give the money back if they leave within a certain space of time. Trying to recover the money (they stole) through the criminal justice system is going to take so long, it’s better to give them an incentive to leave. After that, I propose we move into an environment that is very ruthless with how we prosecute corruption.

Q: You suggest the private sector should help solve some of the country’s biggest challenges. Do you think businesses are willing to take on that much social responsibility?

A: Maybe not in other countries, but in South Africa, because of the BEE (Black Economic Empowerment) legislation that businesses already had to function within for the last 20 years, they are used to it. They are keen to have a say over where their money goes. I estimate that there is another 500 billion Rand (56 billion dollars) worth of empowerment still to happen over the next few years. Instead of investing that money into BEE companies, I’m proposing that business be allowed to invest directly into communities, through initiatives like health, education, skills development. It’s also in the long-term interest of their shareholders, because with better quality of education and skills, the economy will improve and therefore stocks will go up.

Q: You criticise South African’s “complacent optimism” about their future. What do you mean?

A: For maybe five million people (out of a population of 50 million), South Africa is a great country to live. You have wonderful facilities and wonderful infrastructure. But if you ignore the other 45 million, at some point in time, life will become inconvenient. I give the examples of Venezuela or Zimbabwe, where the middleclass ignored the plight of the poor and thus provided the basis for dictators to take over those countries. If in South Africa, we do not deal with the reality today, at some point, it will become fertile ground for an opportunistic politician.

Q: In recent months, people have protested about a lack of basic services in many parts of the country. Have South Africans started to wake up?

A: I am surprised it’s not more. It’s a lot less than what I think it should be and will be. We are fortunate that poor people have been so patient. But I do not think that they will be patient for much longer. We have to start making changes now.