ABIDJAN , Mar 15 2012 (IPS) - “I would like to use contraception, but my husband is against it,” says Bintou Moussa*. The 32-year-old mother has just given birth to her sixth child at the Abobo General Hospital in Cote d’Ivoire’s commercial capital Abidjan. 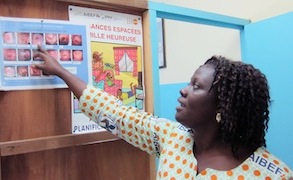 A health worker explains the sexual transmission of infections at the family planning clinic in Yopougon. Credit: Kristin Palitza/IPS

Since violence erupted after the country’s November 2010 elections when former president Laurent Gbagbo refused to cede power to his successor Alassane Ouattara, which brought Cote d’Ivoire to a political and economic standstill for a good six months, Moussa’s carpenter husband Ibrahim lost his job and has been struggling to find new employment.

The family barely survives from the money Ibrahim earns from odd jobs here and there. But despite their difficult economic situation, Ibrahim refuses to consider family planning.

“My husband does not want to use condoms. He says it’s against nature. And I don’t dare to take the birth control pill because I am afraid he might find out about it,” Moussa explains.

When asked if she knows about her rights to sexual and reproductive health, the woman shakes her head. “As head of the family, it’s my husband who makes decisions about the health of the family,” she explains. That includes her body, she says.

Moussa is not aware of the option of having a contraceptive injected once a month, if she so wishes, and that she can do so without her husband’s consent. She also does not know how to access such health services because there is no family planning service at the hospital or any public clinic in Abobo, Abidjan’s biggest slum with an estimated population of one million.

In fact, Cote d’Ivoire’s commercial capital, which counts at least five million people, has only one clinic that offers family planning services free of charge. It is located within the premises of the public hospital in Yopougon, one of Abidjan’s largest suburbs, which lies about 15 kilometres south-west of Abobo and is run by the non-governmental health organisation Ivorian Association for Family Well- Being (AIBEF).

Here, staff counsel about 80 patients a day on issues relating to sexual and reproductive rights, including contraception, safe sex, HIV and other sexually transmitted infections, teenage pregnancies, and maternal and infant health. The clinic also runs outreach programmes through a mobile clinic to raise awareness about the services it provides.

“Our main hurdle is to overcome the patriarchal and cultural perception that the man makes all the decisions at home. But at the same time, men say it’s the woman’s responsibility to take care of the children and their health, including their own pregnancy, birth and post-natal care,” explains Dr. Nathalie Yao-N’Dry, the clinic’s programme manager.

“When effectively women cannot make decisions about accessing health services without the permission of their husbands, that’s a dangerous contradiction.”

Many women share Moussa’s experience in Cote d’Ivoire, a West African country where family planning is widely regarded as a “women’s issue” that husbands do not have to concern themselves with. As a result, very few men use the small number of public services on offer, while women continue to struggle to realise their sexual and reproductive rights.

AIBEF is trying to slowly change this. “Whenever a man is ill and comes to access general health services in the hospital, we try to recommend family planning services as well. But it’s very difficult to get men interested,” says Yao-N’Dry.

The other hurdle is availability of services. While AIBEF struggles to get men to buy into the concept of family planning, most other public health facilities in the country do not even offer such services. One of the reasons is that government has not made any specific allocation for family planning in its already low national health budget.

Only 4.5 percent of the country’s budget goes towards health, despite the fact that Cote d’Ivoire is one of the African Union countries that committed itself through the Abuja Declaration of 2001 to spend at least 15 percent of its national budget on health services.

“As a result, most public health centres in the country don’t have contraceptives in stock, at least not regularly,” she explains. “And even if they do, they sell them at prices that the general population cannot afford, since those drugs aren’t given out free of charge.”

In the 10 months since Cote d’Ivoire has been trying to recover from its violent post-electoral crisis, the country’s new government has put into place a number of measures to improve health services in the country.

When Ouattara was instated in May 2011, he implemented nationwide free health care services to help the population recover from the effects of the post-election violence. Since Mar. 1, the scheme has been limited to free services for pregnant women, children under five and malaria patients.

“Mother and infant health are a priority of the health ministry that needs to be addressed urgently,” said Professor Allou Assa, ministerial spokesperson for the national Department of Health. But sexual and reproductive health services, which are preventative rather than curative, are currently not part of the free package.

That means women like Bintou Moussa continue to be left with few options. In a few days, she will return with her newborn to her small shack, knowing fully well that she might soon fall pregnant again. “We hardly manage to bring through five children. Now we have another mouth to feed. I really don’t know how I could cope with another pregnancy,” Moussa says.