CAPE TOWN, South Africa, Apr 11 2012 (IPS) - Nokwanda Sotyantya sits among heaps of garbage and patiently sorts through it, separating cardboard, plastic, glass, paper and metal, piece by piece. The recycled piles of trash are then weighed and sold to packaging manufacturers in South Africa that reuse the materials to create new products. 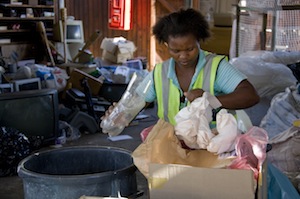 Sotyantya belongs to the country’s first group of small business entrepreneurs who have benefited from the government’s move towards a green economy. It is a strategy aimed at creating environmental sustainability, social equity, and economic growth; the government wants to create 300,000 jobs within a decade in this sector.

For 48-year-old Sotyantya, who is a member of a local recycling cooperative and lives in Imizamo Yethu, a slum outside of Cape Town, the move towards a green economy has turned her life around. Previously unemployed and struggling to survive, she says she now earns an average of 250 dollars a month from her work – enough to care for herself and her four children.

“The more people become aware of the benefits of recycling, the more rubbish gets dropped off at the Hout Bay waste centre. For me, that translates into more money,” Sotyantya explains.

The Hout Bay Recycling Co-op to which she belongs is based at the municipal waste drop-off site in Hout Bay. Here Sotyantya and other members of the cooperative sort and sell the recycled material.

Her cooperative of six formerly jobless, poverty-stricken men and women currently recycles 25 tonnes of waste each month. And this number is slowly increasing.

The cooperative received a boost when Thrive, a social enterprise incubator that helps green start-ups to become viable, competitive businesses, decided to help the cooperative improve its business strategy and management expertise.

It is much more than developing traditional business models, she adds; it is about incorporating social, environmental and economic benefits.

Although it has only been operating since July 2011, Thrive’s work has not gone unnoticed. The SEED Initiative of the United Nations Environment Programme (UNEP) acknowledged the organisation’s work by selecting it for one of its 2011 sustainable development awards that are annually presented to 35 African grassroots entrepreneurs in the green economy.

“On this continent, companies and countries, from small communities to heads of state, are suddenly realising the importance of the green economy,” says UNEP spokesperson Nick Nuttall.

Economic development and environmental and social sustainability cannot operate in isolation, he says.

“Going green doesn’t mean it’s nice and fluffy. There are some hard economic figures behind it, too.”

Creating a green economy is no longer an option, but a requirement, Nuttall says. “We are living in a world of seven billion people increasing to over nine billion by 2050. If we don’t change the way we consume goods and services and think about the environmental limits, then we’re in trouble.”

“But it’s a world of opportunity too,” Nuttal says, adding, “there are more and more examples of small businesses solving big problems and creating livelihoods.”

It is an opportunity that the South African government wants to seize over the next few years. In November, it signed a Green Economic Accord that stipulates active national investment in the green economy.

“The green economy can create large numbers of jobs, provide a spur for industrialisation and help create a sustainable future for this and the next generations,” said Minister of Economic Development Ebrahim Patel after the accord was announced.

The agreement is part of a plan to shift towards a lower carbon-intensity economy, while creating jobs and promoting industrial development.

That is why organisations like Thrive have started talking to and collaborating with different government departments, such as environmental affairs, trade and industry, solid waste or public works, to jointly develop ways of giving the local green economy a jolt.

“Social enterprises are a growing model. We want to develop donor-independent, viable, scalable business models that link the economy and the environment and that can be rolled out in multiple communities or even nationally,” says Lin. “Government has been very supportive of what we’re doing.”

Apart from supporting the recycling cooperative, Thrive is trying to get a number of other innovative green economy businesses off the ground.

One of them is TrashBack, a bicycle recycling collection scheme that picks up re-usable material from restaurants, businesses and residential housing complexes, which are currently not serviced by the municipality. For every eight clients – or 4,800 kilogrammes of garbage – TrashBack can create one full-time job, says Lin.

“We want to show people how it all links into each other: waste, water, food, jobs and better livelihoods for all,” says Lin. “We can’t afford not to have a green economy.”