CAPE TOWN, May 24 2012 (IPS) - The reality of Indian and Chinese investment in Africa is much more complex than the good cop, bad cop image of Asia’s two emerging economic giants. 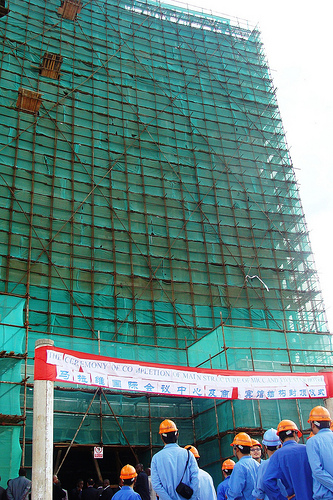 China and India have caused an explosion of trade and investment in Africa in the past decade. Yet they are perceived quite differently: China has a reputation for economic ruthlessness, while India’s business interests are generally seen as beneficial to Africa.

But their investment in Africa needs to be viewed in the context of broader investment trends on the continent, trade experts said at the “Money, Power and Sex: the Paradox of Unequal Growth” conference organised by the Open Society Institute of Southern Africa, which is taking place from May 22 to 24 in Cape Town, South Africa.

Ultimately, it is the responsibility of African governments to set firm ground rules for foreign investment flow and ensure a direct relationship between trade and development, the experts said.

“We are not leveraging our regional economic communities or the African Union (AU) to get better deals and the kind of investment that we need,” lamented Buddy Kuruku, policy advisor at the African Centre for Economic Transformation in Liberia.

If Africa would make development its priority, with the support of the AU, its 54 nations would quickly gain more control over emerging economies’ investments in their territory.

“World powers compete for a presence on the continent, and Africa can benefit from that. If the AU countries would work in solidarity, they wouldn’t need to fear India’s or China’s presence,” said Zhongying Pang, professor of international relations at the Renmin University of China in Beijing.

Although it is still too early to tell what China’s and India’s impact on Africa will be, “it’s potentially more positive than negative,” says Howard French, former New York Times bureau chief in China and a fellow with the Open Society Foundation researching Chinese migration to Africa.

“Africa has for a long time been stuck in a position with few options of whom it wants to trade with,” French said.

With China and India competing for investment opportunities alongside Europe and North America, African nations now have a multitude of potential trading partners to choose from. And more leverage to set the rules.

According to the World Bank, Indian and Chinese foreign direct investment in Africa has grown dramatically. To date, China has been the largest single investor, aid-giver and trade partner on the continent, with 127 billion dollars in resource extraction and infrastructure deals in 2010.

India has much less financial muscle than China, but its influence in Africa is on a rapid rise. It currently accounts for 46 billion dollars in trade deals on the continent and has announced it will invest 70 billion dollars by 2015.

“The Chinese state is surely a major motor of economic activity in Africa. But India is equally striving to boost its investment in resource extraction on the continent,” said French.

At the same time, exports from Africa to Asia tripled in the last five years, to 27 percent of total Asian imports, according to 2010 World Bank data, showing a clear trend towards rapidly growing South- South commerce.

This tendency has been heightened since South Africa joined the Brazil, Russia, India and China (BRIC) group of emerging economies in December 2010, now called BRICS.

China’s push into Africa is viewed more critically because it is largely based on massive state companies pursuing major public works and infrastructure projects, such as stadiums, highways and railroads, very often with state and multilateral funding.

“China has a very formalised policy to encourage Chinese interests and investment in Africa. India has no such policy,” explained Kuruku. India instead follows a short-term investment outlook, with a two- to five-year strategy.

India’s engagement with the continent is primarily driven by private businesses and focused on acquisitions.

China says it is committed to reversing its negative image. The Asian giant plans to revise its Africa foreign policy, hoping this will provide further political advantages in Africa.

“We have learnt from criticism levelled at our investment policy. If China wants to continue to play a role in Africa, it needs to maintain its principle of non-interference, but also add others, such as multilateral interventions and careful policies on land ownership,” said Pang.

Chinese enterprises in Africa also need to comply more strictly with local labour and environment regulations, facilitate the transfer of skills to African countries and upgrade their industries.

Others argue that India is getting off too lightly.

“India has invested in buying off agricultural land to fight food price inflation in its own country. India doesn’t have better labour standards than China. Exploitation, corruption and bribery are rife in India,” argued Aniket Alam, a senior editor of the Mumbai-based journal Economic and Political Weekly.

Like China, India has been particularly interested in Africa to help meet its rising energy requirements, investing in nations with crude oil resources like Nigeria, Sudan, and Angola, he said.

China and India both have rapidly modernising industries and burgeoning middle classes with rising incomes and purchasing power. They have therefore demand not only for natural resource-extractive commodities and agricultural goods but also for diversified exports, such as processed commodities, light manufactured products, household consumer goods and food. All of which Africa can offer. (END)