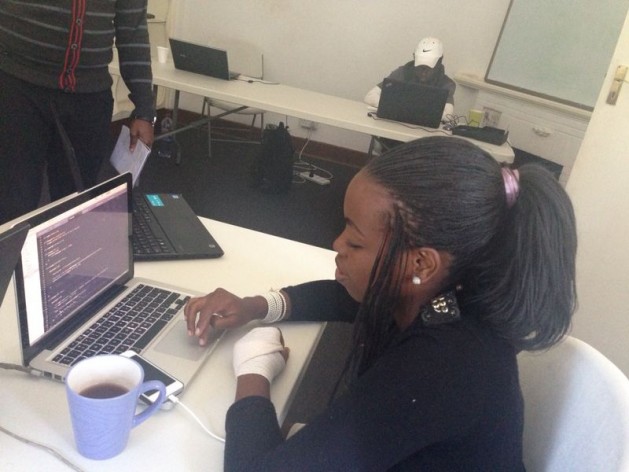 Moselyn Muchena, one of the girls being given a chance under the TechWomen initiative. Credit: Mary Kashumba/IPS

HARARE, Jul 10 2014 (IPS) - For 22-year-old Moselyn Muchena, a final year computer science student at the University of Zimbabwe, it seemed obvious to create a mobile application offering easy access to services in the local catering industry, largely because of the huge number of female entrepreneurs in that sector.

“The kinds of problems these women are going through inspired me to come up with an innovative application for the industry called ORDER NOW, through which they can [post] their menus and specials, as well as their location and the prices of items.

“The application is also interactive, allowing customers to share [their reviews] on other social networks platforms … and it offers a platform for feedback, which is vital for businesses,” Muchena told IPS. The app also allows for advertising.

“We want to tap into the creative and innovative base of 52 percent of the population. Imagine what the world has lost in innovation due to the lack of or fewer women in these creative spaces” – TechWomen Zimbabwe

“I am grateful to get this opportunity to create a culinary application that can be used by restaurants, where mostly women dominate the field,” she said, adding that she hoped her app will have a global reach.

According to Farai Mutambanengwe, president of the Small to Medium Scale Enterprises Association of Zimbabwe, women dominate the catering industry in Zimbabwe. He told IPS that while the association had no actual analysis “on the number of women who are in the culinary industry compared with men, generally women continue to grow in dominating this field.”

Muchena sees herself as paving the way for other girls to enter the fields of science and technology. “Being the only girl doing computer science in my class, I used to feel like an outcast and it took me time to blend in to become part of the class and not ‘the woman’ in the class. I said to myself I would also pave the way for young girls who aspire to have a career in technological innovations.”

The young innovator is just one of over 100 girls and women aged between 10 and 23 who are creating innovative technologies to address community problems in Zimbabwe. They are part of a U.S. Department of State’s Bureau of Educational and Cultural Affairs initiative called TechWomen, a programme designed to empower, connect and support the next generation of women leaders in science, technology, engineering and mathematics (STEM).

Referring to her own experience in developing her software, Muchena pointed out that there was an urgent need for investors in the field of science. “Our plight as young science entrepreneurs is that there are no investors willing to engage youths who are coming up with innovations.” However, lack of investment in the science sector has dwindled as a result of a restrictive economy.

According to a 2008 report in the Economic Reform Feature Service  of the Centre for International Enterprise (CIPE), “the education system in Zimbabwe has long suffered from an insufficient focus on teaching practical skills, limited access to higher education opportunities, and unequal access for girls to specialised fields such as science.”

“Successful educational reform is a necessary step to create the basis for sustained economic growth and requires the involvement of all stakeholders, ranging from families and civil society into national and local governments as well as the private sector,” said the report.

Chemical technologist Aretha Mare, one of the members of TechWomen Zimbabwe, founded by five Zimbabwean women who graduated from the U.S. State Department’s TechWomen initiative, told IPS that its vision is to see gender parity, or 50 percent representation of women in all STEM professions.

“We want to tap into the creative and innovative base of 52 percent of the population,” says TechWomen Zimbabwe. “Imagine what the world has lost in innovation due to the lack of or fewer women in these creative spaces.”

Mare said that under the TechWomen initiative, “the women act as role models, mentors and teachers, creating a networking platform and peer-to-peer interaction with sharing of knowledge to keep them motivated and sharing of opportunities, thus avoiding the leaky pipe where a few women who pursue STEM careers also switch careers or leave due to frustrations in the workplace.”

According to Mare, “the girls’ programme aims to expose girls to STEM fields through experiential learning, where they identify problems, use STEM to solve them, recalibrate and ideate again. We try to do it in hands on, fun and engaging way.”

“We believe we are causing a revolution, transitioning Zimbabwe into a tech power house through girls and women as we target girls from marginalised backgrounds (both in school and out of school), some of them with no prior computer experience and most with limited access to technology. So far we have trained over 100 girls,” she added.

Meanwhile, under its Strategic Plan (2011-2015), Zimbabwe’s Ministry of Primary and Secondary Education in partnership with the U.N. Children’s Fund (UNICEF) has embarked on a massive programme to revive science teaching in the country. The programme is being funded through the Education Development Fund (EDF), a multi-donor funding mechanism.

The programme has already distributed 2,449 sciences kits and is currently working on the re-training of more than 5,000 science teachers from the 2,336 secondary schools in the country on the safe use and maintenance of the equipment in the kits.

For Muchena, it all comes down to convincing parents and the government to strive to ensure that talent is given a chance. “I encourage parents and the authorities to understand that sometimes it is not about the academic aspects but about realising a child’s ability and nurturing it into something big.”