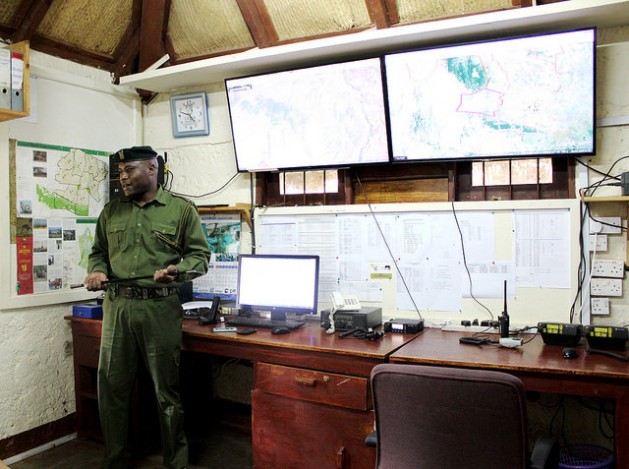 The hi-tech radio room that works with Google Earth maps at Lewa Wildlife Conservancy in northern Kenya where some of the 1,000 rangers of Kenya Wildlife Service (KWS) trained in GPS use lead anti-poaching surveillance. Photo takes May 2016. Credit: Manipadma Jena/IPS

NEW DELHI, Sep 19 2016 (IPS) - Every November, India’s Gahirmatha beach in the Indian Ocean region develops a brownish-grey rash for 60 to 80 days. Half-a-million female Olive Ridley turtles emerge out of the waves to lay their eggs, over a hundred each. For the sheer numbers, this arrival is hard to miss.

However, knowledge about this IUCN’s endangered species’ exact migration route across oceans has remained fragmentary for conservationists seeking to protect its globally declining population owing to destruction of habitat, global warming and trawl fishing.

Migrating songbirds, beetles and dragonflies can soon be hooked up to space satellites helping to predict natural disasters and the spread of zoonoses - diseases that jump from animals to humans like swine flu and avian influenza.

As pressures from climate change, ecosystem loss and wild life crime threaten biodiversity and wildlife around the globe, scientists are responding by harnessing the power of sophisticated space technologies.

Migrating songbirds, beetles and dragonflies can soon be hooked up to space satellites helping to predict natural disasters and the spread of zoonoses – diseases that jump from animals to humans like swine flu and avian influenza. Radars will help locate poachers through infrared, detect through an elephant’s agitated movements, its imminent poaching. Cameras orbiting in space can capture the presence of crop diseases and invasive species in remote locations. The realm of science fiction has already stepped into the real world.

The International Cooperation for Animal Research Using Space (ICARUS) project, whose trial phase starts in 2017, is developing solar-powered sensors weighing 1 to 5 grammes which can be attached to migratory songbirds, even dragonflies, beetles. The transmitted data will inform not simply the geo-positions and movements but provide important clues about the body functions or senses of the animal, giving significant indicators about impending natural disasters.

By 2020, ICARUS sensors could be small enough to fit into locusts, possibly even to use the micro-sensors to control the locust flight path to divert the swarm from valuable crops, say its researchers at Germany’s Max Planck Institute for Ornithology.

Scientists working on ICARUS say battery life is a major limiting factor for tracking small animals since the miniature batteries they can carry do not last long.

However, Russian space agency Roscosmos’s International Space Station, on which ICARUS hardware will be installed, is closer to the Earth than satellites, thus decreasing the amount of power required to upload data. Saving more battery life, the Station will wake the bird-mounted mini transmitter from its energy-saving mode only when it has visual contact to the in-flight bird. It’ll take only a few seconds to transmit all data back to the Station.

The urgency to go beyond manual patrolling to advanced space-based technology to combat poaching and illegal wildlife trade comes strongly from the World Wildlife Crime Report 2016.

The report builds on the data platform World WISE (The World Wildlife Seizures) that contains over 164,000 seizures related to wildlife crime involving 7,000 species from 120 countries spanning 2004 to 2015.

Trafficking of wildlife is now recognised as a specialised area of organised crime and a significant threat to many plant and animal species. The focus of the upcoming 17th Conference of Parties to the Convention on International Trade in Endangered Species of Wild Fauna and Flora (CITES) is set to be the illegal wildlife trade. According to a 2016 UN Environment Programme report, the wildlife trade is estimated at 7 to 23 billion dollars annually.

With poachers increasingly using more sophisticated technology, wildlife rangers need to be equipped too. When a poacher moves in for the kill, elephants and rhinos will often behave unusually. Animal sensors help detect such behavior and send alerts to law enforcement, giving them time to act.

Sophisticated satellites are already monitoring the extent of illegal logging, rate of deforestation and even soil moisture. The launch of hyperspectral imaging satellites that record detailed images in hundreds of electromagnetic wavelengths can assess the extent of disaster, crop growth and diseases, availability of water in remote locations and glacier melts, besides general biodiversity.

Development experts say the role that space tools can play for achieving the SDGs is broad and diverse, specifically Goal 15 to protect, restore and promote sustainable management of ecosystems, forests, soil and biodiversity, monitor not just wildlife but assess whether management practices put in place are having the desired effect.

“There are many types of satellites flying in space,” said Werner Balogh, a programme officer at the UN Office for Outer Space Affairs (UNOOSA). “But how are they being used, is there more that can be done? Can we find joint mechanisms to share this data? It’s an exciting field and there’s still lots that needs to be explored.”

But the high cost of technology solutions and access to the latest science and knowledge remain major constraints for the global South.

“In India, we use radio-collars to track movement for large animals like tigers and elephants. However, permits costs and taxes add to the already high cost of obtaining wildlife collars; for example, satellite collars to be used on elephants are available for 2,500 dollars each, plus annual subscription costs of 500 dollars,” Shashank Srinivasan, spatial analysis coordinator of World Wildlife Fund, India, told IPS.

The South Asia region, with 40 percent forest cover in Bhutan and Nepal and precious biodiversity, is very vulnerable to illegal traffic and wildlife crimes mainly because there exist easier traffic routes to large markets like China.

“The international community must design low-cost space-based appliances for sharing with developing countries like the solar transmitter chips (ICARUS) Germany is developing. It would be of great conservation value if we could procure it for 50 to 100 dollars,” Saroj Koirala, geospatial technologies expert with the World Wildlife Fund, Nepal, told IPS.

“Even if international commercial companies can provide us with, for example, hyperspectral images as old as of year 2010, this would still help country research. The process to access these are conditional and time-consuming,” Koirala added.

Srinivasan said except for initiatives like wildlabs.net that allow for the sharing of conservation-relevant technology, he knew of no other national, regional or international technology sharing or funding.

Experts say awareness of the importance of space-based technologies needs to be created among law makers for need-of-the-hour policies and fund allocation. Koirala said since nature conservation is linked to livelihoods, people themselves will pressurise democratic governments to set aside funds for latest technologies.