This article is the first in a two-part series on the challenges faced by the Democratic Republic of Congo's indigenous Bambuti people around Virunga National Park in North Kivu. 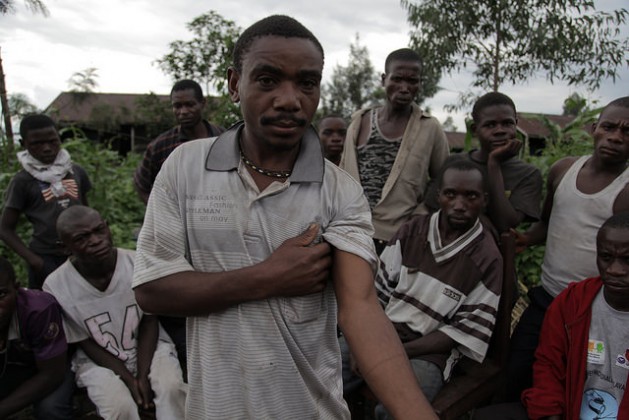 A man from the community of Mudja holds out his arm to show where he was injured by a park ranger. Credit: Zahra Moloo/IPS

MUDJA/BIGANIRO, Sep 14 2016 (IPS) - It is late afternoon when a light drizzle begins to fall over a group of young men seated together in Mudja, a village that lies approximately 20 kilometres north of Goma on the outskirts of the Virunga National Park. Mudja is home to a community of around 40 families of indigenous Bambuti, also known as ‘pygmies.’*

One of the men holds out his arm to show an injury he received from a park ranger. Others chime in.

“When the colonialists left the country, the people who managed those protected areas were trained by the Belgians that conservation should be done without people, in the old-school way." -- Patrick Kipalu of the Forest People's Program

“Just the day before yesterday, they shot at me when I was looking for honey and firewood,” says Giovanni Sisiri. “I abandoned everything, took my tools, and ran.”

Armed paramilitary rangers from the Virunga National Park are tasked with protecting the park from poachers and trespassers, often at risk to their own lives. In Congolese law, human habitation and hunting within the park is forbidden, including for the Bambuti, its original inhabitants.

The Bambuti living in Mudja said that at times they defy these laws, venturing inside to collect wood, hunt small animals and gather non-timber products, but recently it has become more difficult.

“A pygmy cannot live without the park. Before, they could enter secretly,” said Felix Maroy, an agronomist and livestock farmer who works with Bambuti communities. “Since January 2015, the guards are always patrolling the area. And there are other armed groups too, like the Democratic Forces for the Liberation of Rwanda (FDLR).”

Imani Kabasele, a resident of Mudja and the head of the local branch of an NGO, Program for the Integration and Development of the Pygmy People (PDIP), said that two years ago, a Mbuti resident of a neighbouring village, Biganiro, went to look for honey and disappeared for three days. His body was later discovered, cut up by a machete. Kabasele believes it was someone from the FDLR that killed him. 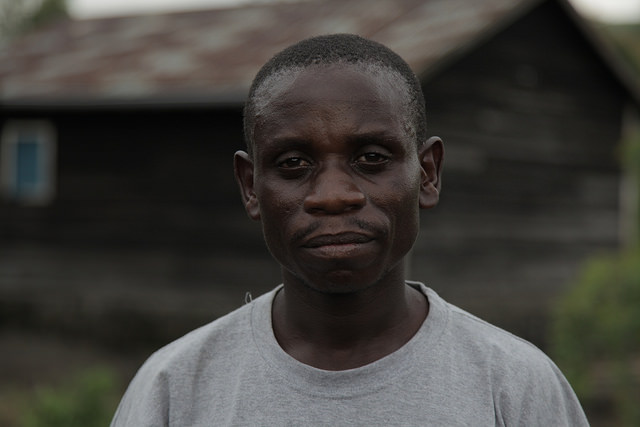 Imani Kabasele, the head of the branch of a Congolese NGO, PDIP, said that the Mbuti know the forest far better than any other communities, but is it is dangerous for them to venture inside. Credit: Zahra Moloo/IPS

The initial demarcation of the Virunga National Park boundaries dates back to 1925 when it was first created by King Albert of Belgium.

The oldest national park in Africa, it was later expanded to include over seven thousand square kilometres of land. Classified as a UNESCO World Heritage Site in 1979, it is now managed by a private-public partnership between the National Park Authority of the DRC (ICCN) and the EU-funded Virunga Foundation, and is home to about a quarter of the world’s mountain gorillas. Congolese farmers living around the Virunga said that its colonial history creates the impression that it was “created by the Mzungu (white man), for the Mzungu.”

After independence, other national parks were established, including Maiko National Park, and Kahuzi-Biega National Park in South Kivu.  According to the Global Forest Coalition, the creation of national parks led to the eviction of thousands of indigenous people who neither gave their consent nor received compensation for their loss of land. It was, they state, “in violation of international law” and the country’s 1977 law on expropriation for public purposes.

Patrick Kipalu, the DRC Country Manager for the Forest People’s Program, said there is an active conflict between communities around the park, both indigenous Bambuti as well as agricultural Bantu, and “conservationists, park rangers and other NGOs working for conservation.”

“The old school of conservation in the colonial period was ‘people out of the forest’ and ‘it’s a protected area without anyone inside,’” said Kipalu. “When the colonialists left the country, the people who managed those protected areas were trained by the Belgians that conservation should be done without people, in the old-school way. They have kept the same strategies, though the ICCN is thinking of a conservation strategy which is supposed to include and involve communities.” 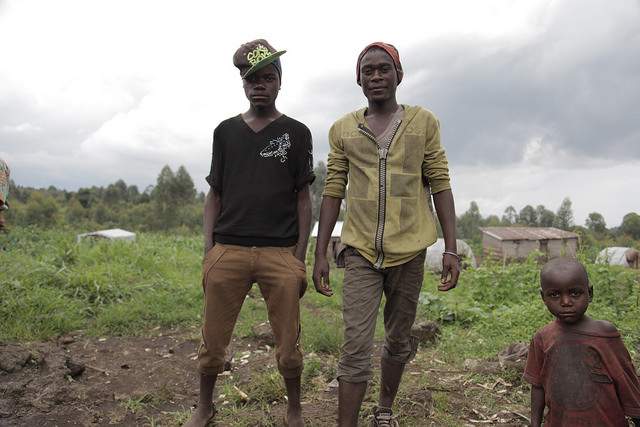 Jean Claude (18, right), poses with his friend Denis Sinzira. Most of the youth in Biganiro only go to school until they are 9 or 10 years old. Credit: Zahra Moloo/IPS

Last year, in a letter to Kipalu, a representative of the customary chiefs in Lubero on the west coast of Lake Edward said that the ICCN had expropriated land without the consent of the people living on it and without offering any compensation. The letter also accused the ICCN of destroying and setting fire to villages. A 2004 report by a consultant to the World Bank, Dr Kai Schmidt-Soltau, states that the ICCN, along with WWF, claimed to have resettled 35,000 people from an area south-east of Lake Edward through a voluntary process, but that in fact the resettlement was carried out “at gun-point.”

Aggressive conservation activities are part of a widespread trend toward what some researchers call the militarization of conservation,an approach to protecting nature in which conservationists could engage in repressive policies that are counterproductive.

Jean Claude Kyungu, who in charge of community relations for Virunga, said that the park’s relations with communities around the park are good in some areas, but not in others, and that guards only fire at people if there is “resistance” from the population, for instance when communities “recruit armed groups to secure the land.” He added that the Bambuti are only arrested when they have defied the law.

When asked about the repressive behavior of park rangers and officers from the Armed Forces of the Democratic Republic of Congo (FARDC) towards civilians in and around the park, Norbert Mushenzi, the ICCN’s deputy director of the Virunga National Park, said that the officers are “undertaking legitimate defense.”

“We also try to educate communities to leave and find alternative solutions, for instance to go to the fields around the park. There were 350 families in one area that left voluntarily,” he said. “The problem is not land. It’s that people want to concentrate in the park and we don’t know why,” he said.

But leaving the park and finding other places to settle is not so simple. One problem, according to Kipalu, is that people living inside illegally have nowhere to go. “The park is so big that it takes the whole area where communities work on their traditional lands,” he said.

Compounding the issue are larger and more complex political dynamics.  According to a group of researchers, Virunga lies at the “epicenter of ongoing conflict since 1993-4” and is “strongly affected by cross-border dynamics with both Rwanda and Uganda.” It is also a hideout for numerous armed domestic and foreign groups.

Communities who enter the park often do so with the protection of armed actors, and links between them are further strengthened by politicians who take advantage of the widespread sentiment that the park expropriated people’s ancestral lands, leading these politicians, in some cases, to “finance armed groups operating in the park.”

The authors suggest that the park “adopt a more conflict sensitive approach to conservation”, and increase efforts to improve local communication. But Jean-Claude Kyungu believes that the park’s approach is not particularly repressive given the enormous challenges. “At Kibirizi, the population lives with the FDLR,” he said. “Do we let these people just go and make their own laws not just in a park, but in a country, that is not their own? People who do not respect the boundaries have to be removed.”

*The word ‘pygmy’ has negative connotations and is used widely in the DRC. According to Survival International, it has been reclaimed by some communities as a term of identify.