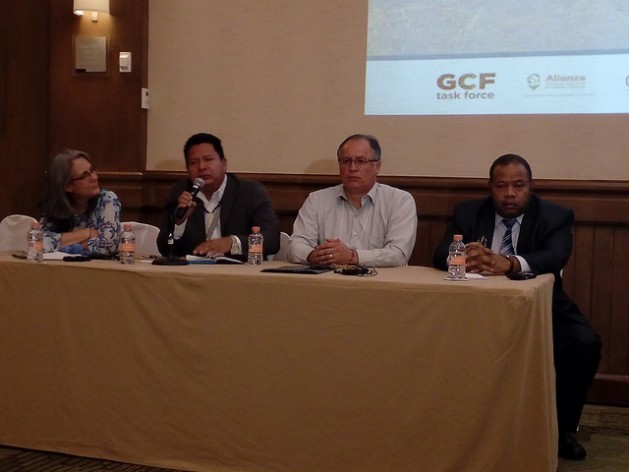 Emberá leader Cándido Mezúa (holding the microphone) demands that indigenous people be taken into account in climate change mitigation actions and that they share the benefits from forest conservation, during the annual meeting of the international Governors' Climate and Forests Task Force (GCF) in Guadalajara, Mexico. Credit: Emilio Godoy

GUADALAJARA, Mexico , Aug 31 2016 (IPS) - “Why don’t the authorities put themselves in our shoes?” asked Cándido Mezúa, an indigenous man from Panama, with respect to native peoples’ participation in conservation policies and the sharing of benefits from the protection of forests.

Mezúa, who belongs to the Emberá people and is a member of the Mesoamerican Alliance of Peoples and Forests, told IPS that “the state should recognise the benefit of this valuable mechanism for long-term sustainability, as a mitigation measure unique to indigenous peoples.”

But little progress has been made with regard to clearly defining the compensation, said the native leader, in an indigenous caucus held during the annual meeting of the Governors’ Climate and Forests Task Force (GCF), which is being held Aug. 29 to Sep. 1 in Guadalajara, a city in west-central Mexico.

Mezúa’s demand will also be put forth in the 22nd Conference of the Parties (COP 22) to the United Nations Framework Convention on Climate Change (UNFCCC), to take place Nov. 7-18 in Marrakesh, Morocco.

"(Indigenous organisations) promote our own sustainable development strategies that are brought into line with local, national and international standards and that stand out for the fact that native peoples’ knowledge and practices are at their core.” -- Edwin Vázquez

The idea is for it also to be taken into account on the agenda of the13th meeting of the Conference of the Parties to the Convention on Biological Diversity (CBD), to be hosted by Cancun, Mexico from Dec. 4-17.

“The viewpoints of local organisations should be taken into account in the implementation of any activity in their territory,” said Edwin Vázquez, head of the Coordinator of Indigenous Organisations of the Amazon River Basin (COICA).

The activist told IPS that indigenous organisations “promote our own sustainable development strategies that are brought into line with local, national and international standards and that stand out for the fact that native peoples’ knowledge and practices are at their core.”

While indigenous organisations hammer out their positions with respect to the COP22 in Marrakesh and the CBD in Cancún, the statement they released in this Mexican city provides a glimpse of the proposals they will set forth.

The “Guiding Principles of Partnership Between Members of the Governors’ Climate and Forests Task Force (GCF) and Indigenous Peoples and Traditional Communities” demands that the implementation of the Reducing Emissions from Deforestation and Forest Degradation (REDD+) strategy must incorporate the “full and effective” participation of native peoples and local communities.

The declaration also states that “All initiatives, actions, projects and programmes led by the GCF that concern indigenous peoples and traditional communities must have the participation and direct involvement of local communities through a process of free, prior and informed consent.”

The measures must also “recognise and strengthen the territorial rights of indigenous peoples and local communities,” it adds.

Furthermore, they will promote financing and benefits-sharing mechanisms to be applied in the context of these initiatives and actions.

“Systems of binding social and environmental safeguards will be included,” to help indigenous and local communities face the risks posed by these policies.

The GCF can serve as a laboratory for the performance of the CDB and COP22, because the emphasis of governors focuses strongly on REDD+ plans. 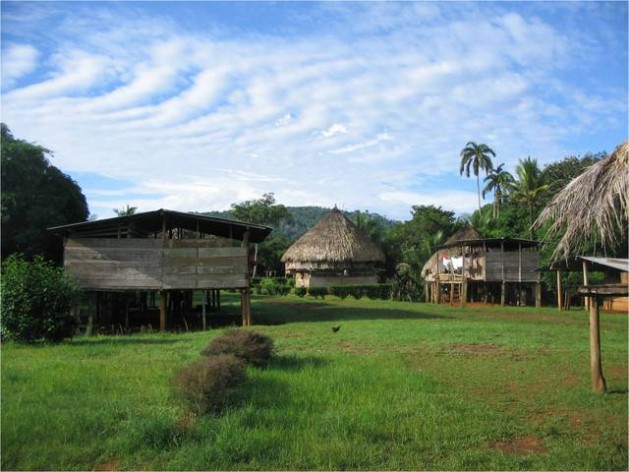 Emberá huts in a clearing in a forest protected by this indigenous people in Panama, in their 4,400-sq-km territory. Native peoples want global climate change accords to recognise the key role they play in protecting forests, and demand to be included in benefits arising from their conservation efforts. Credit: Government of Panama

REDD+ is a plan of action that finances national programmes in countries of the developing South, to combat deforestation, reduce carbon dioxide (CO2) emissions, and foment access by participating countries to technical and financial support to these ends.

It forms part of the United Nations Programme on Reducing Emissions from Deforestation and Forest Degradation (UN-REDD Programme) and currently involves 64 countries.

The GCF, created in 2009, groups states and provinces: seven in Brazil, two in the Ivory Coast, one from Spain, two from the United States, six from Indonesia, five from Mexico and one from Peru.

Financed by various U.S. foundations and the Norwegian Agency for Development Cooperation, the GCF seeks to advance programmes designed to promote low-emissions rural development and REDD+.

It also works to link these efforts to emerging greenhouse gas (GHG) compliance regimes and other pay-for-performance plans.

More than 25 percent of the world’s tropical forests are in the states and provinces involved in GCF, including more than 75 percent of Brazil’s rainforest and more than half of Indonesia’s.

Trees absorb carbon dioxide from the atmosphere, storing the carbon in their trunks, branches and roots, which makes it essential to curb deforestation and avoid the release of carbon. In addition, trees play a key role in the water cycle through evaporation and precipitation.

“The conditions must exist for effective participation in the programme preparation stage,” Gustavo Sánchez, the president of the Mexican Network of Rural Forest Organisations, who is taking part in this week’s GCF debates, told IPS.

In their 2014 annual meeting in the northwestern Brazilian state of Acre, the governors assumed a commitment for their regions to reduce deforestation by 80 percent by 2020 through results-based international financing.

For example, Brazil’s GCF states would avoid the release of 3.6 million tons of GHG emissions a year.

From 2000 to 2010, CO2 emissions from deforestation totalled 45 million tons in Mexico.

To cut emissions, Mexico has adopted a zero deforestation goal for 2030. The five Mexican states in the GCF could reduce their CO2 emissions by 21 tons a year by 2020, around half of the total goal.

Peru has offered a 20 percent cut in its emissions, avoiding the release of 159 million tons by 2030 from land-use change and deforestation. The South American country could reduce emissions from deforestation between 42 and 63 million tons annually by that year.

The GCF manages a fund, created in 2013, aimed at guaranteeing and disbursing 50 million dollars a year, starting in 2020, for capacity-building and the execution of innovative projects.

But the GCF did not invite indigenous organisations to form partnerships until 2014.

The countries of Latin America have not yet shown mechanisms of how to use the emissions cuts to ensure results-based payments. But REDD+, criticised by many indigenous and community organisations, is still in diapers in the region, where only Costa Rica will soon start participating in the plan.

Mexico, for its part, is completing its REDD+ National Strategy consultation.

“We have always had traditional climate policies,” said Mezúa. “The GCF can come up with a more complete proposal, with partnerships between different jurisdictions.”

Sánchez said the goals would be met if the administrators of natural resources are included. “The reach will be restricted if we limit ourselves to REDD+ policies, which are still being designed. A mechanism that brings all efforts together is needed.”

Vázquez said it is “decisive” for the process to include “the establishment of safeguards, mechanisms for participation in decision-making and the implementation of action plans, and equal participation in the benefits.”