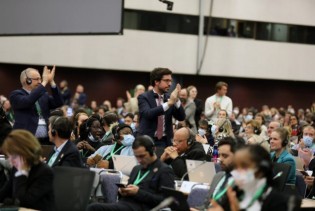 By Emilio Godoy
Synthetic biology, geoengineering and the recognition of ancestral knowledge are the issues that have generated the most heated debate in the United Nations Conference on Biodiversity, which ends in this Mexican resort city on Friday Dec. 17.

By Desmond Brown
The remarkable biodiversity of the countries of the Caribbean, already under stress from human impacts like land use, pollution, invasive species, and over-harvesting of commercially valuable species, now faces an additional threat from climate change.
Next Page »

The world's diverse flora and fauna are facing urgent threats due to pollution, climate change, commercialization of nature and other forms of harmful human intervention. For many years IPS has tapped into its own diverse networks of correspondents to report on continuing and emerging dangers to nature's riches - and the struggle to protect them. In 2014 IPS has provided in-depth coverage of the 12th meeting of the Conference of the Parties to the Convention on Biological Diversity (COP 12) in Pyeongchang, South Korea, from Oct. 6-17, focusing especially on the newly released Global Biodiversity Outlook 4 (GBO-4), the latest progress report on efforts to achieve the 20 Aichi Targets, agreed upon in Nagoya, Japan in 2010, which form a blueprint for worldwide action on biodiversity in the decade ending in 2020. As the United Nations finalises its Sustainable Development Goals, which will replace the MDGs at the end of this year, IPS explores the importance of biodiversity for the post-2015 development agenda.